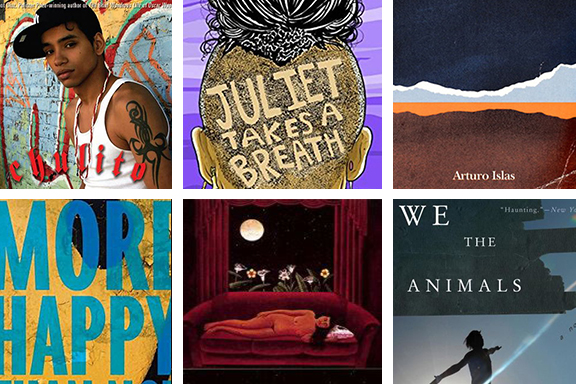 Last summer I had the opportunity to work alongside filmmakers Angie Tures and Henry Alberto as a production assistant on a project that brought the work of noted poet and author Benjamin Alire Sáenz to life on film.

Sáenz and I spent most of the day together talking about film, poetry, and really just about how funny life can be. He gave me a copy of his book, “Aristotle and Dante Discover the Secrets of the Universe.” I opened the book and didn’t put it back down until the last page. I laughed, cried, found love, lost love. I had never experienced reading a book whose story was so similar to my own.

Knowing that there were books like this, I set out on a quest to find other books written about the queer Latinx experience. Knowing there must be others looking for similar books, I’m going to make life a little easier for you. Here’s my list of essential reading of queer Latinx books you have to read before you die.

1. Aristotle and Dante Discover the Secrets of the Universe by Benjamin Alire Sáenz At the top of any queer reading list, you’ll find “Aristotle and Dante Discover the Secrets of the Universe”. One of the many reasons it’s at the top of mine is the book is written by El Pasoan and award-winning author Benjamin Alire Sáenz. The coming-of-age story is set in El Paso and follows the lives of two Mexican-American boys and their unique friendship. The book is currently being adapted for the screen and being directed by Latinx filmmaker Henry Alberto. Gloria E. Anzaldúa is one of the most prolific and influential theorists in Chicano Studies. Redefining the Chicanx experience by giving a voice to its women, she spent her life documenting the Chicana experience. In her semi-autobiographic book, she writes about her experience growing up brown, queer and a woman in Texas. The book is written in both Spanish and English – many times living in the in-between of both languages. If finding representation of the queer identity in literature is difficult, finding a character like Juliet is as close to a miracle as it gets. Juliet is getting ready to leave the Bronx and head to Oregon to pursue an internship with her favorite writer. Afraid of how her family might react to her being queer, she decides that because she’s leaving it’s the perfect time to come out to her family. One of the biggest takeaways is how the book tackles white feminism and the need for women of color to have a voice.

4. We the Animals by Justin Torres There are few books that can capture what it’s like to grow up in an abusive home. Three brothers form a formidable bond as they navigate through their childhood. The narrator must follow a different path as he discovers his queerness. The dark and fragile story was recently released as a film last year and directed by Jeremiah Zagar.

5. America Vol. 1: The Life and Times of America Chavez by Gabby Rivera Is it a bird? Is it a plane? No, it’s an openly queer superhero! This is the “book” for people who don’t like to read. Gabby Rivera does it again but this time partnering with Illustrator Joe Quinones and bringing America Chavez to life. America Chavez is the latest superhero to join the Marvel Universe. She’s not your average superhero and this isn’t your average comic. Chulito is a 16-year-old boy growing up in the South Bronx who starts realizing he might have more than just friendly feelings towards his best friend Carlos. When Carlos is ostracized by the neighborhood for being gay, Chulito has to decide between his community and his best friend. “Chulito” is a work that challenges the idea of gender norms and what it means to be a “man.”

7. The Rain God by Arturo Islas Another author El Paso can be proud to claim as their own is Arturo Islas. He was one of the first Chicanos to be signed by a major publishing house. The Rain God is one of only two books completed by the author before he died in 1999, due to complications brought on by AIDS. The book tells the story of a Mexican family struggling to adapt to the “American” and the immigrant experience.

8. More Happy than Not by Adam Silvera Aaron Soto, a 16-year-old Puerto Rican kid from the Bronx struggles to find happiness. Aaron hears of the Leteo Institute – a company that promises to erase painful memories so people can move forward – and decides it would be best if he could forget he’s gay. What follows is an honest portrayal of struggling with depression and mental illness. Published in 1996, “Gulf Dreams” is considered one of the first Chicana lesbian pieces of literature to be print. It tells the story of a young girl growing up in a rural and racist town in Texas. The narrator telling a gripping and heartbreaking story of her childhood and of the first girl she ever loved.