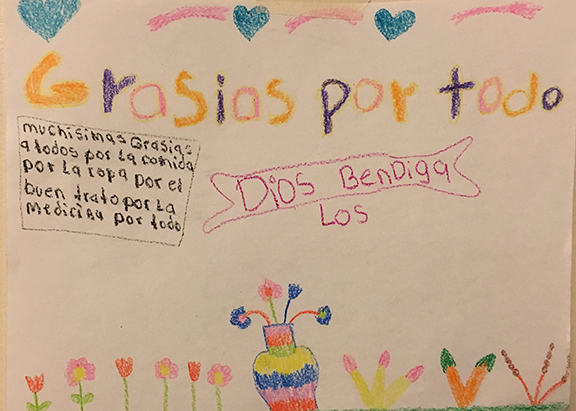 Since early October, the El Paso region has seen an influx of asylum seekers released to the community after processing by Immigration and Customs Enforcement. Thousands of people – mostly families from the Central American countries of Guatemala, Honduras and El Salvador, but also from Cuba, Nicaragua and other nations  – have passed interviews in which they have shown credible fear of persecution if returned to their home countries. They now face an immigration court process that could take years to determine their fate. But for the time being, they are legally entitled to live in the United States.

Upon release by ICE in El Paso, their first stop is a “hospitality center” run by a nonprofit called Annunciation House, which has provided services to migrants for more than 40 years. The hospitality center can be at a church, school or motel. (The locations are not disclosed to the public for the safety of the migrants.)  Asylum seekers are given a room and three meals per day, which often are prepared by volunteers from in the area. Most families stay a day or two before boarding a bus or plane to join family elsewhere in the United States.

One hospitality center features art work created by children who have stayed at the shelter in recent days. The art is a mixture of approaches and messages. Common themes are faith, hope for the countries they have fled, and gratitude for those who helped them in their time of need.