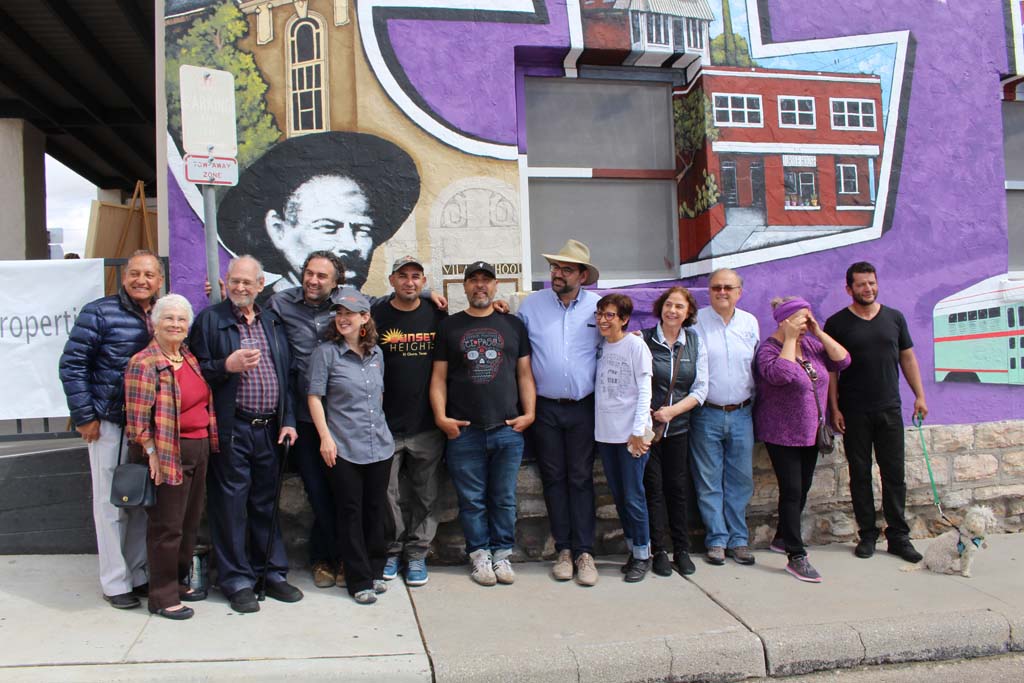 It took three years to bring a love letter to El Paso to life in the historical neighborhood of Sunset Heights.

Pearl Properties unveiled the mural, Love Letter to Sunset Heights, during the neighborhood’s annual tour of homes last fall. The mural is painted on the side of the Pearl apartment building at 220 Yandell, which overlooks I-10.

The Pearl’s owners commissioned Alejandro Lomeli as the artistic director in charge of the painting, but the project didn’t happen overnight. Lomeli, who has lived in three different Pearl buildings – including the one where the mural is now – went off to work as a steelworker in Albuquerque for a while as funding for the project was secured along with permission from the El Paso Historic Landmark Commission.

“The Sunset Heights Neighborhood Improvement Association were our main partners,” said Stefanie Uribarri, manager of the Pearl apartment building. “We reached out to them with the idea to see if the community would approve and they were very supportive. They helped us with the process to apply to the Historic Landmark Commission.” Sunset Heights resident Dolores Henderson gets her first look at the preview of the mural in El Paso, TX. on Saturday, Oct. 13, 2018. Henderson said she has been a longtime resident of the neighborhood and the mural will help visitors know about El Paso history. Photo credit: Eddie Velazquez

Uribarri attributed the idea for the mural to District 1 City Rep. Peter Svarzbein.

“Before he was a city councilman Peter was doing interventions in other buildings and he said ‘you know, the side of that building would be perfect for a mural’ and that was the origin for this concept,” Uribarri said. “That was five years before we even talked to Alex about the mural.”

The concept for the painting itself stemmed from one of Lomeli’s favorite hobbies. “I love collecting postcards of El Paso,” Lomeli said. “I was going to make a painting out of one and I suggested it as the idea for the mural.” Alejandro Lomeli works on detailing the mural in El Paso, TX. on Thursday Oct. 11, 2018. Lomeli said that his shifts working on the mural ranged from 8-12 hours a day. Photo credit: Eddie Velazquez

aft had more downtown buildings had a sunset as its main element before he decided to focus on Sunset Heights.

“I am a big supporter of local history and historic buildings so I thought it was great if we kept it Sunset Heights and added some historical figures from the history of El Paso,” he said.

Mexican revolutionary hero Pancho Villa and renowned architect Henry Trost, both believed to have been Sunset Heights residents, are featured on the mural.

Lomeli said that his favorite part of the mural was the color scheme.

“I think the buildings coming up and building art are just too drab,” he said. “That’s why I think adding some color is good. And to me, it matches what the neighborhood is like.”

Svarzbein said the high visibility of the mural is a bonus for the community. “For all the cars driving by to be able to see this and for all the people to walking from Sunset Heights to downtown to see this history come alive is beautiful,” he said.

Lomeli hopes the project helps make a broader impact on passers by.

“I want the mural to show that El Paso has talent, that it is not just a mediocre city and I want it to make El Paso stand out,” he said.