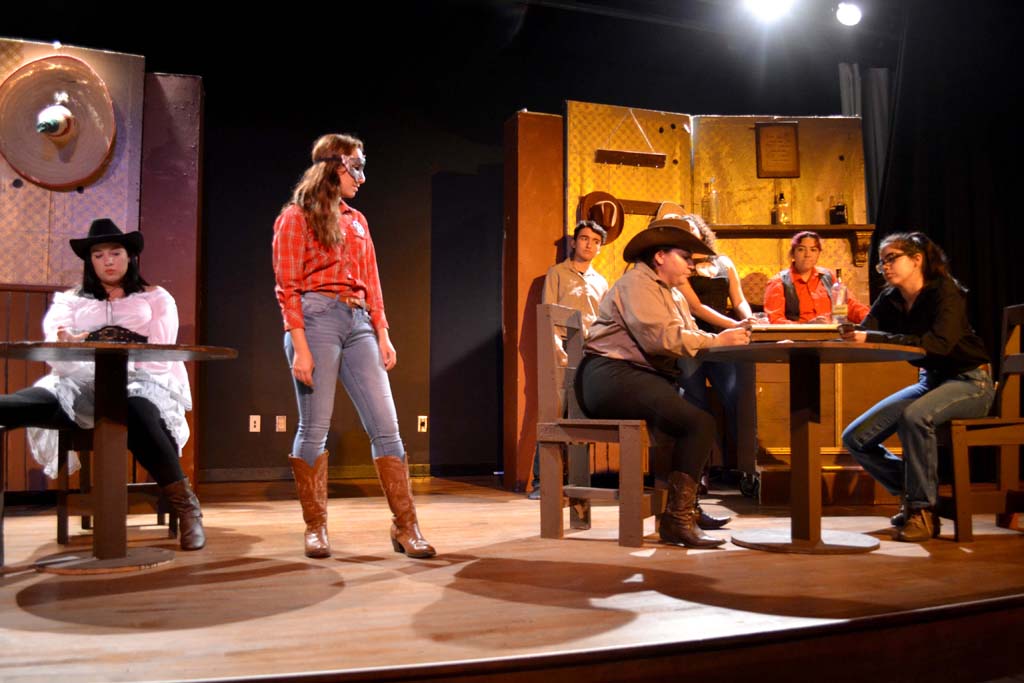 Actors in the saloon on the first scene of "The Ballad of Roobie Rookie" in The Philanthropy Theatre Downtown. Photo credit: Jacqueline Aguirre

When the curtain closed this fall on an unusual play about a robot sheriff and his band of outlaws at the downtown Philanthropy Theater, playwright Robert De La Rosa, dressed in black jeans, cowboy hat, and a bandana around his neck, was there to receive a standing ovation from the packed auditorium.

The post-apocalyptic tale, “The Ballad of Roobie Rookie,” that he co-wrote with a local playwright was no small accomplishment for De La Rosa who was diagnosed with autism as a child. His mother, Maria De La Rosa, says her son has never allowed being on the autism spectrum to stand in his way. She first became aware that the youngest of her three children was different when he was three and she noticed him methodically arranging toys and VHS movies on the floor of their Northeast El Paso home. “He would become very involved with that toy, he would just get really happy and flap his hands and that was different to me; I didn’t know why he was doing that,” Maria De La Rosa said.

When he was five, a co-worker informed Maria about autism, and she decided to have her son tested. Doctors concluded that Robert was “on the spectrum of autism.” Maria, who was then working as a manager at Wal-Mart, left her job for the next four years to care for her son.

Throughout his infancy, Robert struggled to communicate with others but finally, six months after starting kindergarten, he began singing the ABC’s. As he grew older he developed a love of movies and music. His mother recalls that when he would watch the Nickelodeon and Disney channels or listened to rap and pop music on the radio, Robert began “stemming,” an autistic behavior that includes dancing, jumping and clapping and waving his arms.

Later, as a teenager, inspired by movies like Rango and Robocop, Robert began to create his own storylines with the help of a speech therapist.

“I make a script when I have an idea. I picture it in my mind and I type it on the computer,” Robert says simply. The initial idea was furthered developed with help from Artistic Director and co-founder of The Border Theatre, Austin Savage. Through three separate meetings with De La Rosa, together they created character descriptions and storylines, transforming De La Rosa’s idea into a full-length play about a robot sheriff, Wreckie, and other characters. “It was very clear to me that the vision he was seeing was incredible and the only thing prohibiting it was the ability to communicate that,” says Savage.

The play was written in the span of several months, and Savage organized numerous readings with the help of community members at The Border Theatre and The Glasbox, where Savage met De La Rosa’s teacher and Theatre Director, Marissa Thurman.

Thurman, a theatre director for 11 years, said she knew she wanted to have the screenplay adapted and shortened for her theatre students to perform at Del Valle High School.

On Autism Awareness Day in April, students performed “The Ballad of Roobie Rookie,” to raise money for The Autism Society of El Paso and the autism specialists of the Ysleta School District. “I’ve had the honor of teaching Robert for three years, and he amazes me constantly,” said Thurman. “He never lets his disability get in the way of his amazing imagination.”

In September, Thurman recast new actors to play the roles with a change in venue to the Philanthropy Theatre at The Plaza Theatre. With some of the high school juniors and seniors playing opposite gender roles, they began rehearsing in September and performed the play in mid-October.

“Having a dream that has become a reality, even though it’s still progressing, it’s an actual thing. And it’s amazing for it to be real this way,” Maria, his mother, said.