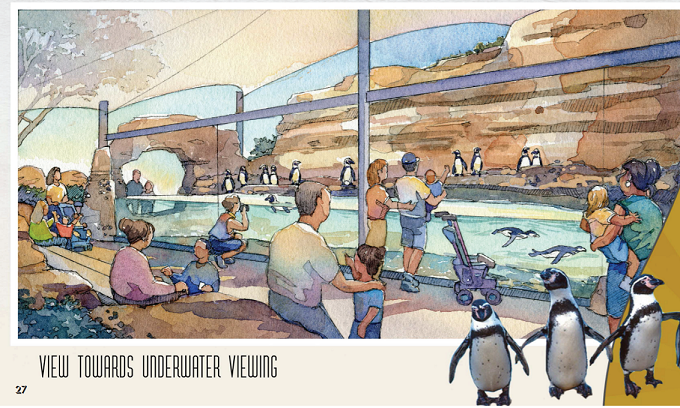 The penguin exhibit will house at least 12 penguins in a natural environment. Artist rendering provided by City of El Paso. Photo credit: City of El Paso

The El Paso Zoo will soon become home to a colony of Magellanic penguins – a species listed as threatened by an international organization – in a new multi-million dollar exhibit as part of the city’s 2012 Quality of Life bond issue.

Magellanic penguins, which reside along the coasts of South America and reach as far north as Brazil, are small – about two feet tall – with black and white feathers and banding on their necks. They are commonly found in Argentina, Chile and the Falkland Islands.

“The more people learn and read about them, the greater their passion will before wanting to help,” said Rick LoBello, education curation for the El Paso Zoo. “We want people to be emotionally invested and passionate about the animals here.” The penguin exhibit will house at least 12 penguins in a natural environment. Artist rendering provided by City of El Paso. Photo credit: City of El Paso

A dozen penguins will be part of a South American exhibit, set to open in 2020, officials said. The penguin exhibit is expected to cost about $3.7 million, with construction expected to start in fall 2019, said Lili Gutierrez, the Capital Improvement Plan administrator for the El Paso Zoo.

The South American exhibit is part of a $50-million capital improvement program approved by voters as part of the 2012 Quality of Life bond that includes other improvements. Director Steve Marshall points to where the penguin exhibit will be built at the El Paso Zoo and open in 2020. Photo credit: Summer Masoud

The zoo is getting an almost complete overhaul. The current Americas region will be split into a North Americas region, featuring the new Chihuahuan Desert exhibit and the sea lion exhibit, while Magellanic penguins will be brought into the South American exhibit.

Zoo officials chose Magellanic penguins for a number of reasons, among them because the penguins have been declared threatened by the International Union for Conservation of Nature and Natural Resources. The penguins are threatened by climate change and oil spills, which severely damage natural habitats and reduce food supplies, said John Kiseda, the zoo’s animal curator.

The initial 12 penguins might grow to a larger number through a breeding program, possibly calling for an increase in the exhibit’s size, Kiseda said.

The penguin habitat will consist of an indoor-outdoor exhibit with naturalistic landscaping featuring a rocky bank, a snow-making machine, a wave-making machine and other water features. There will also be a nesting area for potential breeding and penguin chick-raising.

“Any time we’re thinking about a new exhibit for a species we always look at their natural husbandry and then we try to bring that into the area as much as possible,” said Misty Garcia, the zoo’s associate veterinarian. “So if we have animals that require chilled water you know we make sure we have a pool that we can keep chilled with life support equipment that is appropriate for the species.” The El Paso Zoo is among the Top 10 percent of the zoos nationwide as accredited by the Association of Zoos and Aquariums. Photo credit: Summer Masoud

The El Paso Zoo also is constructing a $14 million Chihuahuan Desert exhibit, set to open next fall. The construction of these exhibits will not effect exhibit access.

The exhibit will replace the grey wolf exhibit. The wolf and other fellow Chihuahuan desert animals will be moved into the new Chihuahuan Desert exhibit when it is completed. The old exhibits will be demolished in order to accommodate the new penguin exhibit. Care will be taken in order to preserve as many of the existing foliage in the proposed exhibit area.

In addition to Magellanic penguins, the zoo is looking to bring other animals including squirrel monkeys, flamingos, otters, red pandas, Komodo dragons, and giant anteaters. “We try to look at animals that need the conservation space and the messages are really compelling,” said zoo Director Steve Marshall.

Magellanic penguins were chosen for their ecological disposition toward higher temperature weather in drier and more arid climates, Kiseda said.