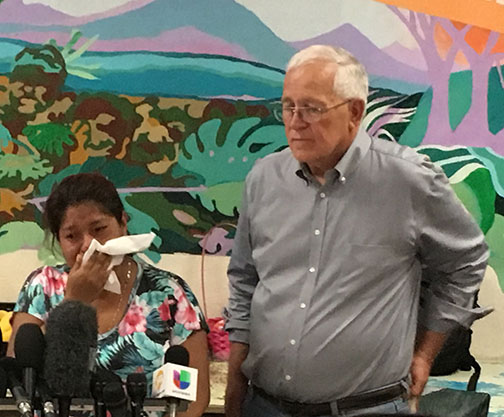 Confusion has reigned in the days since the Trump administration ended its controversial practice of taking children away from parents arrested at the Border. One El Paso nonprofit group has taken the lead on efforts to reunify parents and children, and to make sure the world knows their stories.

At 2:45 p.m. on Sunday, a Department of Homeland Security bus pulled up outside Casa Vides, a shelter run by Annunciation House, and disgorged 32 people who had been held on misdemeanor immigration charges until the charges were dropped Thursday and Friday.  Annunciation House, which provides shelter and legal services for migrants and refugees, would help them begin what promises to be an arduous process of reunifying them with their children.

Annunciation House Executive Director Ruben Garcia said he believed this was the first large-group release of parents who had been jailed under the Trump administration’s “zero tolerance” immigration enforcement policy. Annunciation House staff welcomed 32 Central American parents to the Casa Vides shelter on Sunday, where they would begin the process of regaining children taken by U.S. border agents. Photo by Robert Moore.

The group of migrants were connected with legal help, focused on getting their children back. They are free to leave El Paso at any time if they want to go with family somewhere else, Garcia said. They are free on their own recognizance while their immigration court proceedings continue, and some likely will wear ankle monitors, he said.

At a Sunday afternoon press conference, Annunciation House officials said the reunification process is fraught with confusion and uncertainty.

“I asked if these parents were going to be provided any specific information on how they go about (regaining) their children. And I was told that the only thing that they’re is going to be provided is the 1-800 number,” said Ruben Garcia, the executive director of Annunciation House. “That to us is very problematical because we’ve had people in our houses that have attempted to work with that 1-800 number and its been very, very difficult.”

Taylor Levy, the group’s legal services director, said if people get through at all, they are told that someone will get back to them several days later.

Garcia and Levy said the reunification process is further clouded by a new agreement that calls for the Office of Refugee Resettlement, which cares for and attempts to place minors apprehended at the border, to share information with Immigration and Customs Enforcement and Customs and Border Protection. Anyone seeking to take custody of a child from ORR must agree to submit fingerprints of all adults in the household to ICE, a frightening prospect for many undocumented immigrants.

“Obviously that’s going make a lot of people not willing to come forward, perhaps, to do the process you need to get the children out of HHS custody, which is very problematic, and we do foresee it being a problem,” Levy said.

Levy also criticized president Trump for his tweet earlier Sunday that said when somebody arrives at the border, they should be immediately deported without legal proceedings.

“That is not what our country stands for,” she said. “These people are fleeing for their lives, they are refugees, they are not economic migrants. The vast majority of them are coming here because they have no other option and they want to survive, and they want their children to survive. And they have every right under United States laws and under international treaties to fight their cases and be given the process that is due.”

On Sunday evening, dinner time drew near. Annunciation House staff and volunteers met individually with each of the parents, explaining the process that lies ahead on their immigration cases and getting their children back. Taylor Levy, Annunciation’s legal services director, met with a group of about a dozen men and patiently answered numerous questions.

The parents appeared relaxed, with most enjoying their first sense of freedom in a month or more. Garcia said they parents generally felt a sense of relief because they finally have some freedom and were seeing friendly faces for the first time in a long time. All had ankle monitors, which they will wear while their deportation and asylum cases make their way through immigration court.

In the intake process, Annunciation House staff and volunteers learned that 34 children total had been taken by border agents from the 32 parents. Only two of the parents had spoken with their children since separation. Eighteen of the parents were men, 14 were women.

The parents had been detained for 25 days on average. The longest detention and separation was a father who hadn’t seen his 5-year-old daughter in 40 days.

During the intake process, parents were asked if they wanted to tell their story to the media. Five said yes. On Monday afternoon, 24 hours after they arrived at Casa Vides, the five parents had a dramatic press conference at the shelter, telling their stories. The parents were identified only by their first name. A Guatemalan woman named Miriam broke into tears as she described her separation from her 5-year-old son, who was taken from her by Border Patrol agents on June 16. She was one of five parents to speak at an El Paso press conference on Monday. Annunciation House director Ruben Garcia is at right. Photo by Robert Moore.

The most emotional moment of the press conference came when a Guatemalan woman named Miriam told the story of how she reached out earlier in the day to her 5-year-old son, who was at an Office of Refugee Resettlement facility in New York. She hadn’t seen him since Border Patrol agents had taken him a way in the early morning hours of June 16.

She reached her son’s case worker, who told Miriam that he didn’t want to talk to her.

“He is a little boy. I asked to talk to him but he is mad with me. He didn’t want to talk to me because he thinks I have abandoned him,” she said, her voice breaking.

The other parents told similar stories of the frightening separation from their children, and their deep desire to get their children back.

The U.S. government holds more than 2,000 children it took from parents in May and June under a family separation policy that the Trump administration abandoned on June 10 after facing widespread condemnation. The process of reuniting parents with children is fraught with confusion, with the parents given only a toll-free number for finding information about their loved ones. The reunification process will take weeks or months to play out. Many immigrant advocates fear some families will never be united.

Garcia is a protégé of St. Teresa, the nun known as Mother Teresa who gained global fame for working with the poor in Calcutta. He has worked with refugees and immigrants for more than 40 years from Annunciation House. He usually bears a calm demeanor and warm smile. But after Monday’s press conference, he was deeply angered.

“Their children have been taken from them and now they are … being told to go over hoops and hurdles to get their children back,” Garcia said. “Categorically, (when) the government of the United States takes away a child from one of these refugees and the refugee is released, it is the burden of the government. ORR should tripping over itself to find these parents and say, we’re on a plane with your daughter, we’re on a plane with your son, and we will be in El Paso, Texas, within 24 hours.”