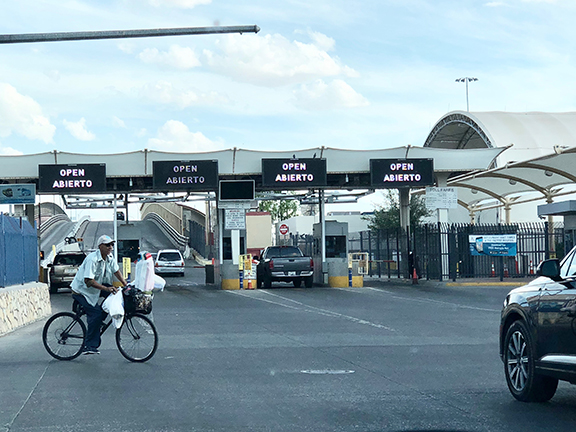 During his campaign, candidate Donald J. Trump talked about a big, beautiful wall, murders and rapists coming across the border from Mexico and promised to secure the nation’s southern border.

Now, as president, Trump has ordered states to deploy 1,000 members of the National Guard along the Rio Grande, as well as guardsmen along the Mexican border in California, Arizona and New Mexico.

As a native of El Paso, and familiar with much of the border and its people, employing guardsmen is a good idea for our border. This will only help strengthen our border security. For many years our city has been accustomed to seeing border patrol agents monitor our city. We have seen the border patrol trucks on the freeway, residential areas, and anywhere else we can think of.

I support this notion by President Trump because he is protecting the safety of citizens, rather than the interests of those that do not live in the U.S.

According to the Texas Tribune, border communities tend to have lower crime rates, as more resources are invested in the border region. As citizens living near the border, statistics like this should enable us to be more accepting to more military presence near the border.

We have media pop culture defining the border regions in the Southwest as dangerous and crime infested areas. Movies like ‘Sicario’, and television shows like ‘The Bridge’ denote the border region as being run by criminal organizations, when on the contrary, we’re deemed safer than other metropolitan cities outside the U.S.-Mexico border.

In 2017, El Paso was listed as the second safest metro city by SafeWise. In the report, cities with a population greater than 300,000 were analyzed with FBI crime data to come up with the results.

According to a report by the DHS’s Customs and Border Protection, apprehensions at the Southern border increased nearly 40 percent in March when compared to February.

“Until we can have a wall and proper security, we’re going to be guarding our border with the military,” Trump said.

According to Lt. Gen. Daniel Hokanson, vice chief of the National Guard Bureau, about 650 National Guards were in Texas at the end of May. So as El Paso-Juárez residents should we be bothered?

No, because this only enforces our safety. Why should we let political pundits turn an issue such as national security as a talking points for votes? This is one societal factor that we will be plagued with forever because we live near a border. A border that the U.S. has a right in protecting.

Our safety should never be played around with. If people commute between both cities through the international borders, they shouldn’t be afraid of the extra military presence.

This is an exciting time to be living near the Southern border, because now more than ever, we have the national spotlight on us. How we respond to President Trump’s actions will define us for generations to come.

Will we oppose the protection of our border? Or will we stand up to political correctness?

It is my belief that society tends to focus on the opinions of those people who are against enforcing our laws. According to a Reuters poll, majority of Americans support the National Guard on the border. About 70 percent of Republicans think this action will be effective in the short term to control illegal immigration, while only 42 percent of Democrats support it. As taxpayers, having the National Guard shows us that our money is being used for the right reasons. Protecting the safety of those who actually live in the U.S.

The El Paso sector of the U.S. Border Patrol employs about 2,400 Border Patrol Agents, according to the U.S. Customs and Border Protection website. If we’re used to 2,400 border patrol agents, what’s a few more hundred from the National Guard?

This proclamation is a good thing for America, because it sends a message to other countries that after many years of open borders, America will take a stronger stance on who comes in to the country.

For Trump supporters, witnessing our president delivering on his campaign promises shows us that he can actually deliver, even if the opposition is immense. For those opposing Trump, his policies should not come off as a surprise because he made his views for this country known from the moment we came down the escalator on Trump Tower to announce his presidency for the U.S.

After eight long years, we have a president that is finally putting the interests of the American people first. As it should always be.