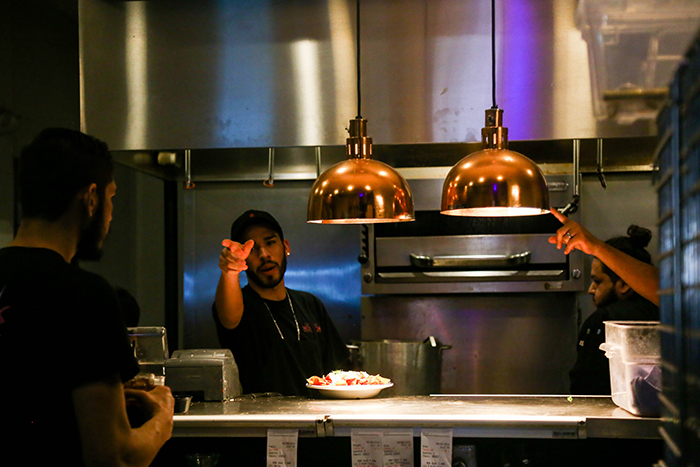 Malolam, in West El Paso, is on El Paso Water's list of Certified Water Partners. They conserve water in their kitchen and properly dispose of grease and fats.

El Paso Water has been working on conservation programs for residents for nearly 20 years. Since the start of the initiative in the 1990s, per capita consumption has been reduced by over 20 percent, according to research by the utility.

“We found that about 15 percent of the water use from the commercial sector comes from hospitality and the food service industry,” Christina Montoya, communications and marketing manager for El Paso Water, said.

In May of 2017, Montoya and her team developed the idea to recognize restaurants that have been successful in conservation by deeming them as Certified Water Partners. This way, conservation-conscientious establishments will serve as examples to restaurants who are not aware they may be wasting water.

The committee sought out restaurants that are local, have their own water meters and are active on social media.

“We went out to these restaurants and looked at how they were handling water use in their kitchen, in their bathrooms and over all if they had water efficient appliances,” Montoya said. “We used that to give them points and if they reached a certain amount of points then they became a Certified Water Partner.”

EPW now has 29 Certified Water Partners in the city. The restaurants are able to place a seal somewhere on the front door or print it on their menus.

Fabian Mendoza, event coordinator for Stonewood Modern American Grill at the shops at Montecillo TIME, also works for other local restaurants and bars. Mendoza is proud of Stonewood’s efforts to conserve water.

“In the kitchen we have effective dishwashing,” Mendoza said. “Instead of just putting forks into the dishwasher we’ll wait until it’s full to wash them.”

EPW also requires that its water partners also be FOG (fats oils and greases) compliant. The Texas Commission on Environmental Quality (TCEQ) advocates for the proper disposal of fats, oils and greases to keep them out of sewers and septic systems to avoid plumbing problems.

Mendoza said that at Stonewood employees collect fats and oils in special bins and wait for the city to pick them up rather than disposing of them in a harmful way. Stonewood also has a maintenance employee who makes sure all the faucets are not leaking and water is flowing correctly in the bars and restaurants.

On the northeast side of El Paso, Linda Diaz, the manager of Border Burger and Beer, said she is always encouraging her employees to save water.

If a restaurant is determined not eligible to be certified after an EPW audit, the utility will work with them to suggest water conservation improvements.

“It’s not only for saving water for the future but it’s also for saving them with their spending,” Montoya said.

“This is a huge decrease but we’re looking at our future, as our city grows, what we’re going to need to continue to decrease in order to help meet the demands of an increased population,” Montoya said. “That target is about 118 gallons per person by the year 2030.”

Montoya said there will be a natural decrease in conservation since newer homes in El Paso are being built with water-efficient appliances like water-saving shower heads, faucets and toilets.

Water users can always do every day things to be more conscientious about consumption.

“One of the biggest things you’ll hear us talk about is taking shorter showers, that’s probably the number one thing that you can do to decrease water use in your home,” Montoya said.

“In the winter when the grass is dormant, it’s not growing so it doesn’t need to be watered the same amount of time. Also, doing full loads of laundry, and dishes is important.”