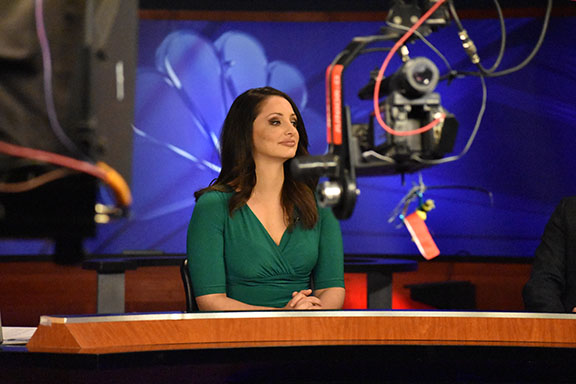 After a broadening of horizons tour around Texas, the newest primetime anchor at NewsChannel 9 was ready to come home.

Natassia Paloma, 30, is an El Paso native and a UTEP graduate who returned to her hometown to introduce her son Nathan to her biggest inspiration, her grandmother Palmira.

Palmira was instrumental in Paloma’s path to become a journalist. Her tales of life in one of El Paso’s most popular neighborhoods instilled a love for storytelling in Paloma at a young age.

“My grandma would always talk to me about growing up and raising my mom, uncle and aunt in the Segundo Barrio,” Paloma said. “Then we would visit and she’d say look, this is where we lived, this is where your mom went to school, etc., so I always had a curiosity about Segundo Barrio and knowing that it is a very poor neighborhood.”

However, Palmira was not the only mentor Paloma found along the way. Her journalism teacher at Hanks High School, Noel Knight, invited her to write for the Scriptoria—Hanks’ newspaper. “Without his (Knight’s) direction, I don’t know, maybe I would have been a writer, I don’t know. He started the path for me,” Paloma said.

Some of the stories she wrote for the Scriptoria include school spirit stories, as well as entertainment stories such as writing about the significance of Kurt Cobain’s death.

Paloma said that one of the first moments when she realized she wanted to be a journalist came at the Scriptoria, when she wrote an opinion piece about the stresses of being in high school.

Segundo Barrio played a role in Paloma’s career once again when she interned at the now defunct Newspaper Tree during her college career. “I did a whole story on Segundo Barrio and spoke to people like my grandma, people who had been living there for decades. They kind of helped paint the picture,” she said.

“It’s not just any poor neighborhood in El Paso. They had so many memories there, so that directly inspired me to write a story on segundo barrio and I even got cited on Wikipedia, which was very exciting.”

During her last semester in college, Paloma sent multiple applications to different job opportunities—both in TV and print. “I think that was the most stressful situation I have ever been in, not knowing where you are goanna go,” she said.

Eventually, she got an email from the Victoria Advocate, which had an opening for a diversity reporter.

“You always want to have a job that is going to fit you, but the diversity beat was something I was always passionate about,” she said. “When they told me about the international links, I jumped on it. Even though I didn’t know if I was missing out on tv, I said ‘no, this is what I want to do.’”

After a year of working at the Victoria Advocate, Paloma’s news director offered her to work at the local Fox affiliate. “I was loving what I was doing but I thought I could take it to the TV station because there wasn’t a lot of representation of Latinos,” Paloma said.

“In fact, I was probably one of two people who is bilingual in that newsroom. So they put me in the Spanish newscast because it was one building and all the affiliates under one roof,” she said.

Once Nathan was born, Paloma decided it was time to opt for a more flexible lifestyle and return home, where she wanted to raise her son.

“Once I had my baby I thought it was the perfect time and I always knew in my heart that I would come back. I wanted to slow down and I wanted to be around my family, so now I’m back,” she said.

Palmira is very happy to hear of her granddaughter’s return and to be around Nathan. “She is just happy to be around him and when she heard that I was coming back she started crying. She said she has been praying for this moment since I left because we are so close,” Paloma said. “Now I’m finally back and she loves having me here. She speaks Spanish but she still watches channel nine.”

As for some of her future plans at the station, Paloma said she wanted to focus on polishing her anchoring, as well as her voice inflection. She is also looking into working on some stories related to children. “Since I just had a baby I’m really into child stories, not just parenting, but even stories I was doing before like children on the border,” she said.