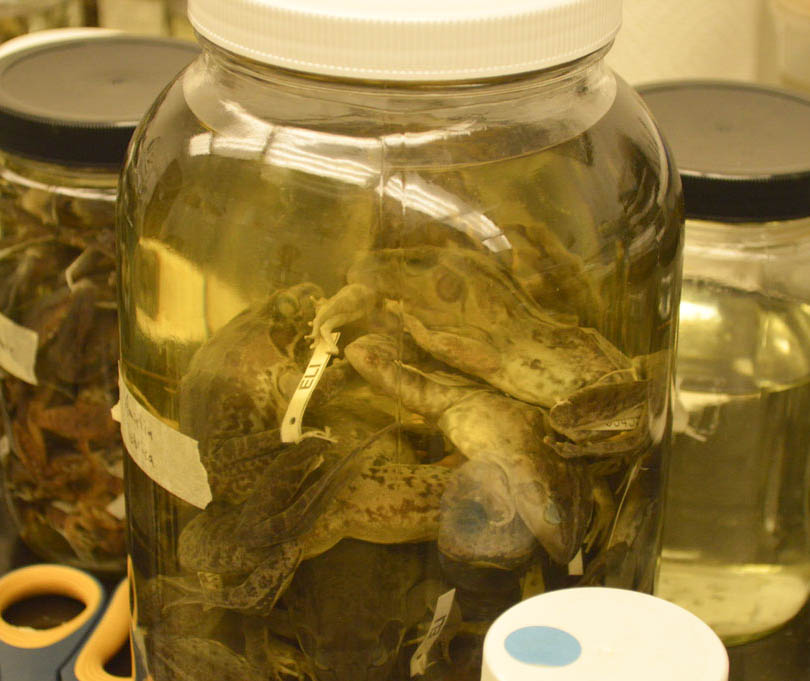 With his shaved head and graying goatee and loads of adventures to relate, UTEP professor and geneticist Eli Greenbaum resembles a modern-day Indiana Jones. He has survived two major expeditions to the Congo, several bouts of malaria and been confronted by machine-gun totting tribal villagers. His work over the last 10 years has been focused on researching how to repopulate the decreasing amphibian and reptilian population of the African nation.

“There was this one area (of the Congo) where I went to a really remote place and the local tribe thought I had come to drink their blood,” said the 6-foot-tall professor who is in his late 30’s. “Emerald Labyrinth: A Scientist’s Adventures in the Jungles of the Congo” includes details about the Congo’s history, Greenbaum’s work there as an evolutionary geneticist, the tropical diseases people face and cultural practices that are unique to Congo tying them to Colonialism.

The book, published by UPNE, will be available as of November 7, 2017 in bookstores across the country, and can be preordered here

Even if the field of genetics could be somewhat challenging for many, for Greenbaum genetics are a job and his passion.

“For me genetics is a way to look at really ancient evolutionary processes that go back hundreds of thousands or millions of years and DNA is sort of a magic window into doing that, because there is no other way to reconstruct evolutionary history without the power that DNA sequencing does,” Greenbaum said.

Much of Greenbaum’s work in the Congo has focused on the extraction of DNA from frogs and other reptiles and amphibians that could face extinction in the near future. For a Biologist, The Democratic Republic of Congo contains a vast field of study – Dr. Greenbaum focused his entire work there Photo credit: Lucero Fierro

While most people would find it challenging to work in the center of a very poor and underdeveloped country, for biologists and geneticists like Greenbaum the Congo is the perfect place to work.

“For a biologist it’s very exciting working here because there are many areas of Congo that are still relatively ancient, since they haven’t changed much in the last several hundred years, so there are areas that are still quite wild,” he said. Baby Caimans being studied – for what makes them different from alligators and crocodiles Photo credit: Lucero Fierro

His work mainly focuses on the collection of specimens of amphibians and reptiles, the extraction of DNA, and taking photographs of the specimens. Once the field work is completed, all of the samples are taken back to the laboratory at UTEP for further study.

A majority of species Greenbaum comes across are poorly known, and it’s his job to determine if they are fairly new to science or a species that hasn’t been seen in the past 40 or 50 years.

Another important aspect of his work involves species extinction, and he worries that many species are in danger of extinction because tropical rainforests like those in the Congo are being cut down.

“A lot of the species I am discovering today are probably going to be extinct in 50 to 100 years unless we completely do a 180-degree on what we are doing with deforestation,” Greenbaum said.

His work also centers on the genome and the evolutionary aspects of a particular species. Greenbaum’s research team includes graduate and undergraduate students and Teresa Mayfield, who manages the biodiversity collections at UTEP.

Another area of his research deals with a new technology derived from the bacteria Streptococcus pyogenes which works along with a protein called Cas9.

CRISPR Cas9 stands for Clustered Regularly Interspaced Short Palindromic Repeats and was developed by Professor Jennifer Doudna from the University of California, Berkeley and French Director of the Max Planck Institute for Infection Biology Emmanuelle Charpentier.

Dubbed “Breakthrough of the Year” in 2015 by the American Association for the Advancement of Science, CRISPR Cas9 seeks to modify the genome of certain pathogenic viruses like HIV or cancer and make them nonpathogenic.

This new technology has interesting applications such as the one focused on a biomedical application in the search for a cure for cancer. Cancer is in effect a genetic mutation in the wrong place that makes a person’s cell cycle go haywire, according to Greenbaum.

“If we can go in there and cut and paste out the mutation… there can essentially be ways to cure cancer or other genetic diseases,” he said.

Another important aspect of his work is researching other factors besides deforestation that can lead to the extinction of amphibians and reptiles. One of those factors is the chytrid fungus, which could have originated in Congo and has spread worldwide killing many species. Fortunately, CRISPR Cas9 could be used to tweak a genome in amphibians and reptiles and make them immune to the fungus.

Another interesting potential application of CRISPR Cas9 is to use it to clone a species this is facing extinction or already extinct.

Greenbaum says that a research possibility is to connect the DNA of a specimen, clone it, create a new population and put it back on the ecosystem, an almost science-fiction experiment that might be possible in the future.

He hopes his first book helps raise consciousness among the general public about environmental challenges and the health of the planet.

“I do hope to be increasing awareness, especially in the area I work in Central Africa and that the average person who reads my book realizes the damage they are making to the planet,” he said. “I hope I change a few minds on the way.”