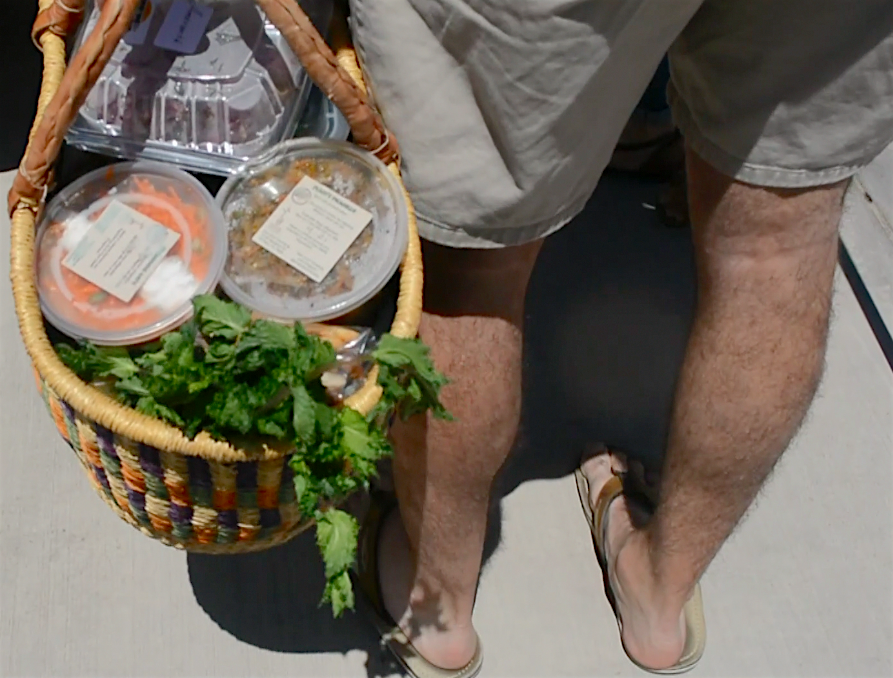 What began as a food truck in the fall of 2016, One Grub Community provides access to healthy, plant-based foods through the vegan meals and grocery items it sells at the Downtown Art and Farmers Market every Saturday.

By providing access to healthy and tasty foods, “El Paso’s first pay-it-forward meatless merchant” is joining some other local vegan eateries in winning over El Pasoans’ hearts – one vegan delicacy at a time.

“I think the community knows that some authentic, good stuff is happening,” owner Roman Wilcox, 36, says. “We get really positive feedback on all our stuff; we’re really blessed.”

According to Wilcox, the company’s most highly-requested menu items are its “Natcho Queso”, a cashew-based chile con “queso”, and seitan jerky, protein made of wheat gluten and red lentils. One Grub also offers prepared meals, including breakfast tofu scrambles and seitan-stuffed peppers.

“People’s eyes bulge out because they can’t believe it’s plant-based,” he says with a laugh. “(Healthy food) is like a bad word here in town, so I wanted to break that stereotype…and make healthy food taste like home cooking and delicious.”

To get their hands on One Grub Community’s plant-based foods, patrons can either stop by its station at the farmer’s market or place their orders via phone or email. Wilcox shares the menu, which changes weekly, on social media in the days leading up to Saturday’s market. Wilcox, who himself is a meat-eater, says he likes to cook vegan foods because it allows him to be more creative in his cooking while also helping the environment. “We can…knock down emissions, reduce our carbon footprint, and save some animals’ lives in the process,” he says.

Although veganism is becoming an increasingly popular lifestyle, is still relatively uncommon. According to veganbits.com, vegans comprise just 0.5 percent of the U.S. population – that’s approximately five million Americans. Through One Grub, Wilcox is working to serve this relatively small population while also broadening the palates of meat-eaters.

“I’m not asking (people) to completely switch over, but be aware and make some responsible choices, and realize that it’s really good and delicious,” he says. “If you have it in you to eat a dead carcass, then eating a dead flower or plant shouldn’t be that scary.” Customers’ donations, along with 5 percent of the company’s sales, are used to fund community events to help feed people in need. Photo credit: Kayla Melson

While many people are flocking to One Grub Community for its tasty vegan cuisine, the chance to pay it forward is also a big factor in attracting customers. Wilcox says that all tips and donations, along with 5 percent of the company’s revenue, goes into a pay-it-forward bank to bring healthy vegan meals to those who might not otherwise get a chance to try.

“We get the money, then we take that money and create an event…where we can just serve a community good, clean, delicious, healthy food that they wouldn’t have access to to begin with, and make friendships and tighten up our community,” Wilcox says.

Through these events, One Grub Community partners with downtown El Paso’s Opportunity Center for the homeless to provide free vegan meals to those in need; this includes the homeless community, cancer patients, and people who have lost their jobs.

“Sometimes the gift of a good meal can really help someone through a trying time,” Wilcox says.

Wilcox is no stranger to philanthropy. Dating back to his college years, the Art Institute of Phoenix alumnus has been involved in various church leadership positions, community service programs. More recently, he was the head chef at downtown El Paso’s Mustard Seed Café, which also operates under a pay-it-forward concept, where patrons pay what they can for meals — or more if they want to help underwrite meals for others.

Wilcox says that he and his wife, Adriana, had envisioned owning this type of business ever since they got married in 2001. Adriana, 34, deals with the administration side of the business, which includes handling finances and social media.

“I cook the food, but she runs the show,” her husband says proudly.

A business graduate of the University of Phoenix, Adriana feels that operating a business where a portion of its sales goes towards helping feed the underprivileged “can be conflicting in a sense where in school, you’re really taught to drive profits and focus on revenue…but what’s different is how you want to share and give back to the community,” she says.

A former City of El Paso employee of five years, Adriana left her well-paying job to commit to the company full-time. She also withdrew from her retirement to help fund it.

“It was super risky and I’m not a risk-taker, so that’s how much this project has fueled me,” she says. “But it was absolutely worth it!”

The couple’s two daughters also help in carrying out One Grub’s mission. The girls, ages 13 and 6, help prepare food and even attend the weekly farmer’s market. “Working with my family is the best part,” Adriana Wilcox says. “That almost takes the work out of it.”

As One Grub Community continues to grow, Wilcox hopes to better meet the high-demand of vegans and vegetarian El Pasoans by eventually expanding into “a household place where you can get good food that happens to be…plant-based,” he says. “We want it to be as normal as freakin’ Carnitas Queretaro up in El Paso,” he adds with a laugh.

Wilcox, who rents a commercial kitchen to do his cooking in, says he is currently seeking a space of his own to increase production. Growing tiresome of cooking pounds of food with his own two hands, he also wants to eventually add staff members to help out. Although the company’s monetary situation is not quite ready for this expansion, Wilcox says the journey is more than worthwhile:

“What we lack in the finances right now we’re making up in relationships, community-building, and the response that we’re getting from people,” he says, “and it’s a beautiful thing.”

Until One Grub Community grows into what the Wilcoxes are envisioning, the family plans to continue providing access to vegan foods to those who otherwise wouldn’t have it.

“To be the first meatless merchant is kind of fun, but my hope is that I’m the first of many,” he says. “I hope that we can team up with other people who have the same interest…because we need access to fresh food. I can’t do it by myself.”

Adriana says she’s also in it for the long run: “It’s been great and I feel that I can almost taste the success of it…and I know it’s going to come no matter what,” she says. “I feel like I can do this kind of work forever, and don’t think I’ve ever felt that about any other kind of job.”

Anyone interested in trying One Grub Community’s vegan cuisine can visit its station at the Downtown Art and Farmer’s Market every Saturday. To make a donation, visit its website and click the “donate” icon on the home page.