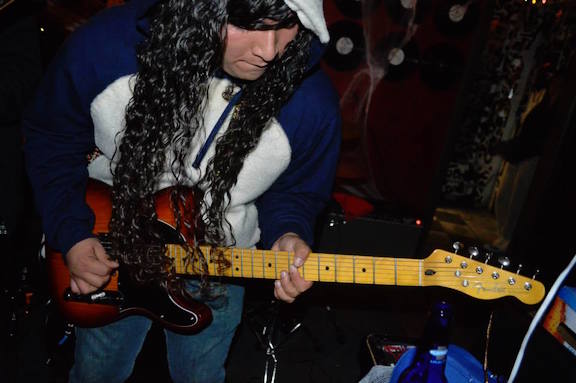 One of my first show playing, it was Halloween of 2013 where Sumatra hookah lounge was.

El Paso and Cd. Juárez are in the middle of one of the best eras ever in the local music scene. It’s clear by looking at the new artists hitting area stages, including Latin Grammy-nominated The Chamanas, who have become one of the best artists on either side of the border. One of my first show playing, it was Halloween of 2013 where Sumatra hookah lounge was.

The local music scene is important to these border cities for several reasons. The local bands give the border community an opportunity to learn new music and see all the new artists that are emerging.

My experience as a local musician, playing guitar, has been full of ups and downs. I have had shows where no one comes and you are left playing for the bartender. Other times, I’ve had shows were the place is totally packed and all the people are singing your songs.

I have been around the local music for about four years, playing with two bands. My first band was called Dirus and we only lasted one year. My second and current band is called Flamél for which I have been playing more than three years.

Over these four years of experience, I have had the opportunity to play in many venues in the border area and out of town. Among the places I’ve played are: The Lowbrow Palace, Plaza de la Mexicanidad, Don Burro Foro Cultural in Chihuahua and Centro Cultural Paso Del Norte among others. We are scheduled to play the Neon Desert Music Festival 2017.

I’ve also been given the opportunity to record my first album, called “Volumen 1.”

Musicians must have good networking skills to succeed in the local music scene. Musicians have to connect with the people and gain their trust by giving good performances every time they step on the stage.

When you are under this environment, there is no place to be unprofessional. You always have to give our best and showed to the people that you have earned being there on the stage.

Sergio Hernandez is a musician and a multimedia journalism major at UT El Paso.