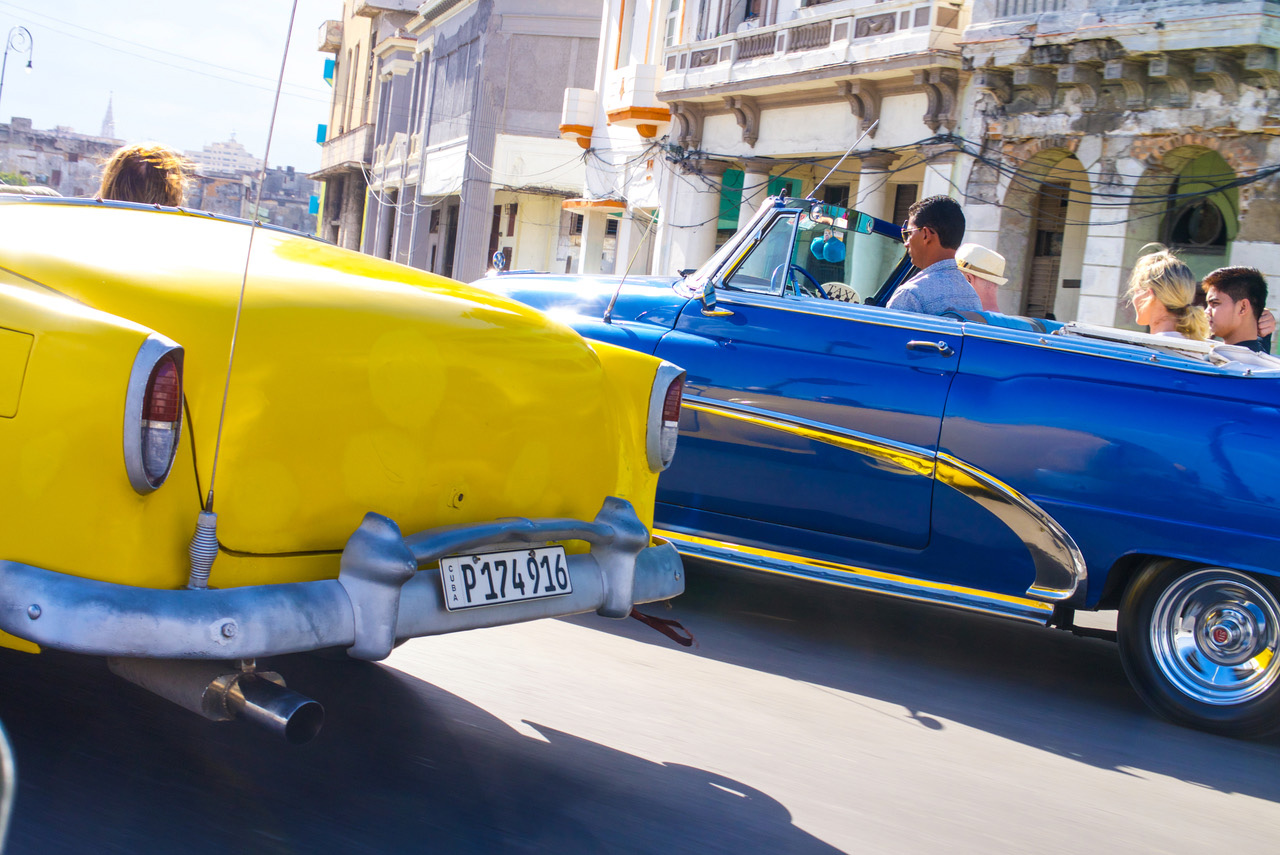 HAVANA – Applause rings out as my Southwest Airlines jet lands at José Martí airport the day after Trump told Cuban exiles in Miami that he was shutting the door Obama opened to normalize relations with Cuba. They always applaud.

It’s my second trip to the Communist island in six months and the third in ten years to do street photography for an exhibit in Taos this fall and as I walk the cobblestoned alleys of the historic city it becomes obvious that folks here are taking in stride what Trump said.

Trump lied to the old men of Brigada 2506, the veterans of the disastrous Bay of Pigs landing in 1961. He blustered that he was rolling back the rapprochement, which was a lie. Raw tourist travel, hotel eligibility and continued progress will be affected for now, but not much else and the U.S. embassy remains open in full force. The old boys in the Brigada are used to lies from American presidents. Kennedy left them defenseless on the beaches of Girón. Pawns in the political games that feed on their desire for revenge, they don’t get anything, but they don’t learn.

The official Cuban response was a gem of diplomatic formality. The foreign ministry condemned the unprovoked action with a tit-for-tat citing U.S. weakness, from gun violence to the Republican attempt to strip health care from millions of Americans, but ended in a conciliatory note in the hope of future improvements in relations. It was an obvious sign of respect for the U.S.-Cuba achievement under Obama and the office, if not the man.

Trump’s bombast at that venue did relight memories of historical U.S. interference in the internal affairs of Latin American nations and served to strengthen the gritty resolve of most Cubans. One Cuban university professor told me, “The most cynical thing he said was that he was doing it for the Cuban people.”

While future efforts to normalize relations, of course, will have to wait, Cuban patience seems eternal. And Trump rekindled pride here not downcast eyes. No, it’s chin up, look ahead and speak loudly. Cuban Spanish is the loudest Spanish in the world.

Food continues to be a problem commodity now just as it was ten years ago. Nobody goes hungry here, but quality is low and diversity scant. The hotels and restaurants get the food they need to serve tourists, but average folks wait in line at government stores for staples or pay high prices to farmers, the guajiros, who come in from the countryside towns to sell their produce. One of my friends prepared a dinner of ropa vieja for us – shredded beef served with fried ripe plantains, rice and black beans. Her family shopped around town for a week to find the ingredients.

You can tell the guajiros — they’re often blue-eyed and fair like their Spanish immigrant forefathers, awkward, uncertain as they hawk skimpy bunches of vegetables in the capital of their world. Havana seems as strange to them as it does to a gringo tourist.

The young waiter serving me a cortadito — espresso with a touch of foamy milk — late in the day in the open-air lobby of Hotel El Bosque in the Havana suburb of Vedado put it this way: “Hacemos lo que podemos con lo que tenemos.” We do what we can with what we have, which is the long version of the Cuban national mantra – resolver. In the face of deprivation, we find a way. And he proved it when I asked him for a ham and cheese sandwich.

“Y no hay mayonesa.” There was no mayo either.

So finally I ate my tuna fish with olive oil and limejuice on crackers and some canned carrots that tasted like new old stock from a Soviet era bomb shelter.

I see Cuban society as largely stratified into four segments – top government officials and the military, the professional class of doctors, lawyers and engineer; the tourism entrepreneurs; and at the bottom, the common folk. They all get the same social guarantees — food, education, housing and medical care, but the Obama opening and the American tourism tsunami that followed provoked a profound awakening in one segment of the population – everybody in a tourism related job. They always did better, but renewed capitalism fever has surged.

Today’s cab drivers (always a leading economic indicator) and other entrepreneurs have diversified into touring and bed-and-breakfast accommodations, advertising on Airbb. One cab driver showed me photos of rooms in his house available for $35 a night, about one third of the going rate in an average hotel. He recently started to work with other neighbors on his block to offer a wider selection. Trump’s new mini-embargo doesn’t worry him. About half of the hotels in Havana are run by the Cuban Army and would be ineligible to serve American groups under the new Trump rules. For this entrepreneur, that restriction is just an opportunity to expand.

It’s too late for Trump’s rules to change Cuban outlook – they’ll just work around them. They’re infected with the money bug. They see how money begets money and now a strange new gray capitalism has sprouted along with a nudging sense of dissatisfaction in the professional class. Professionals have always moonlighted driving cabs, working in hotels, guiding tours, to make ends meet and they still do today to augment a $40 a month salary, which seems to be the universal paycheck for college-educated professionals.

The college student helping to carry my photographic equipment in the sweltering Havana streets marveled at the cost of the taxis that ferried us around. “He makes $20 to drop us off and $20 to pick us up. That’s what my mother, who has three college degrees makes in one month,” he said. It’s been raining for two days and a toddler plays in a puddle formed in the glistening cobblestones in the old city. They’re called adoquines. You find them in all the Spanish colonial cities of Latin America and they’re the fossil footsteps of the new world like layers of sediment in an archeological dig. They came as ballast along with the Europeans and a million African slaves, first in the Spanish galleons that replaced them with treasure and later as ballast in merchant vessels that left the finest harbor in the hemisphere laden with sugar.

Now they’re under my feet hundreds of years later as I walk the ancient alleys photographing life. Habaneros live on the streets and my camera records love and kisses, business transactions, none without arguments, mechanics on their haunches on the wet adoquines working on the old cars, and children out of school in the summer playing ball and doing mischief of all sorts.

At that moment, my heart goes out to the families torn apart since the revolution, the faces here still resolute after decades of deprivation, the photos on their walls of young balseros drowned in the Florida straits, and also to the old men of the Brigada and all the exiles I have worked with and lived with in the U.S. I see their pain. I can see the lost country in their eyes, the fertile island’s red earth, the terraced fields of sugar cane and tobacco, the palm trees that sprout at random in the hills, the glorious old city, the moist tenderness of the sea breeze on summer evenings along the Malecón, and I can see the pain, anger and regret. I understand the old editor at The Miami Herald who told me the first day we met forty years ago, “Estoy muerto. I died when I left Cuba.“

Back in Tampa a week later, my Cuban mother-in-law is making coffee in her stovetop espresso maker, a can of Bustelo on the counter. She heaps sugar into the pot and smiles at me, “Sin azúcar no hay país.”

The Havana Hallelujah street photography exhibit by David Smith-Soto opens September 23 at the David Anthony Fine Art gallery, (DAFA), at 132 Kit Carson Road in Taos New Mexico, as part of the Taos Fall Arts Festival. Gallery owner David Mapes notes, “I’ve set out to feature the most innovative artists from Taos and around the world in a museum-quality environment without the intimidation factor that often pervades those types of galleries.” Smith-Soto is donating proceeds from the sale of prints to the Taos Gallery Association through the Taos Center for the Arts to further their mission of burnishing the profile of this historic city as an axis for art. For more information, please call the gallery at 575-758-7113, or visit DAFA’s website, http://davidanthonyfineart.com/artists/