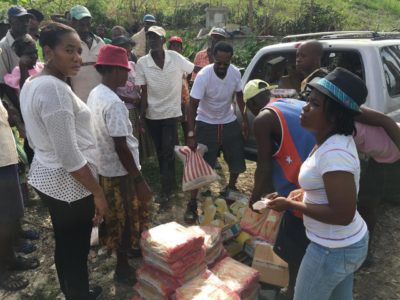 GRAND’ANSE, Haiti – Hurricane Matthew needed only a few hours to level the village of Anadère. But it could take months before the government or any relief agency provides assistance to this isolated community in southwestern Haiti.

“No one has come here,” said resident Daniel Dieuveuille, six weeks after the hurricane ripped through Anadère on October 4, 2016.  Dieuveuille said all 50 or so homes in the village were destroyed, including those where the 70-year old farmer, his wife, and extended family have lived most of their lives.

“We’re surviving on what little we have,” he said. ”Our hope is in God.”

Nestled in mountainous terrain bordering the Grand’Anse and Sud Departments – the area hardest hit by the hurricane – Anadère is not easy to reach in the best of times. The storm made matters worse: the largest nearby road to the town of Maniche practically washed out, and the dirt swathes that wind through valleys and up mountainsides to Anadère became nearly impassable.

Still, Dieuveuille’s nephew managed to make it. He came all the way from Miami to bring a few plastic tarps to serve as temporary roofs and at least a couple of weeks’ provisions of food. That makes Daniel Dieuveuille and the village of Anadère, for all their hardships, among the luckier ones in the wake of Hurricane Matthew.

The hurricane caused more than 500 deaths, damaged 1,663 schools, displaced some 33,500 persons, and wiped out an estimated 90 percent of crops, according to the Haitian government and international sources. An estimated 840,000 people are still in need of humanitarian aid. Ninety percent of the population has no access to safe water, and there were more than 6,000 suspected cases of cholera in the affected area in the six weeks following the storm.

Yet as weeks turn to months following the storm, there is growing concern across southern Haiti that the village of Anadère is no anomaly, that the relief effort has been slow and limited in scope, and that it has not been reaching those most in need. The government has yet to put in place a reconstruction plan for the region, and there was limited coordination in the immediate aftermath of the storm among the major aid agencies involved.

Some of the hurricane relief that is getting though has been channeled through smaller organizations such as those funded by the Inter-American Foundation (IAF), an independent foreign assistance agency of the U.S. government that promotes citizen-led development. Unlike the large-scale operations of international aid agencies, the work of IAF grantee partners is generally carried out by Haitian professionals who know the local area, have contacts on the ground, and employ a community-based approach to distribution that ensures assistance gets where it needs to go.

Still, the IAF is a small agency – the combined estimates for hurricane assistance among the organizations it supports total less than $200,000, while estimates  of the overall cost of the relief effort in Haiti have already run into the hundreds of millions.

As explained by Marie-Rose Romain Murphy of the Haiti Community Foundation, a local nongovernmental organization that has received IAF funding in the past, “Many areas don’t have the contacts to access the aid. The people suffering most are the most vulnerable – the elderly, women with small children, the handicapped. People getting something are younger people with the strength to trek their way out of impacted areas.”

As for Anadère, Daniel Dieuveuille said villagers are getting by for now on reserves of millet and corn, and by selling off livestock that survived the storm. Dieuveuille himself lost 16 goats and a cow, practically his entire herd. The few trees still standing are so denuded from the winds that locals can’t find enough leaves to burn trees that fell in order to make charcoal to sell.

Even prior to the hurricane, Anadère had no electricity, running water, or medical services, so its residents are accustomed to the hardscrabble life of Haiti’s countryside. Still, resilience has its limits. Dieuveuille said his village is in particularly desperate need of cement, galvanized roofing, and cinder blocks to start rebuilding as soon as possible. The weather has been soggier than usual since the storm, and the tarps from Dieuveuille’s nephew are starting to wear thin.

“They stop the sun, but not the rain,” Dieuveuille said.

Haiti’s rainy season starts in February, and the few communities that have received aid are already making plans for it. But as the clouds loom on the horizon, there are also plenty of ravaged villages like Anadère that continue to sit in wait.

This blog is an excerpt from an article in Grassroots Development, the journal of the Inter-American Foundation. You can access the full article at  http://www.iaf.gov/home/showdocument?id=705

David Einhorn has worked as a journalist for Knight-Ridder newspapers and as an international development worker with the U.S. Peace Corps. Inter-American Development Bank, and International Monetary Fund. He has worked and lived overseas in such countries as Paraguay and Haiti. He is also a jazz bassist and today works with Caribbean jazz artists such as Reginald Policard of Haiti and Luther Francois of Saint Lucia. He currently lives in Martinique.