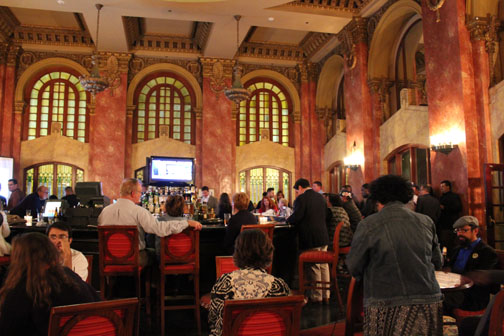 El PASO – On election night as Donald Trump claimed victory in the 2016 U.S. Presidential election and Hillary Clinton’s campaign drew to a close in defeat, I spent the evening with the El Paso County Democrats at their “victory” party. What started off as a hopeful event at the Camino Real hotel soon turned into a miserable affair.

6:40 p.m.: I arrive. There were already around 60 people gathered in the hotel’s grand Dome Bar. Drinks already flowing, the atmosphere was calm and relaxed. Trump is in the lead. When the results come in, the crowd roars. Incumbent, Richard Wiles beat his Republican challenger, Tom Buchino, with 65 percent of the vote compared with Buchino’s 35 percent. Kool & The Gang’s song “Celebrate Good Times” plays and the atmosphere instantly goes up a notch.

The fuss over Wiles goes on for around 45 minutes, hand shakes aplenty and interviews with TV news crews

7:30 p.m.: A cardboard cut-out of Clinton arrives, carried by nurse, John Geronimo, who seemed confident of a Clinton victory.

“I support Hillary Clinton so I’ve brought a piñata over from the headquarters and we’re going to break it for the victory party later on,” Geronimo says. They plan on attaching the piñata to the cut-out.

Another Democrat confident of a Hillary victory is conference speaker, Mike A. Gonzales.

“I have a gut feeling that Hillary will be our next president and make history. There will be a radical movement by electing a female president, she knows the United States, she has a lot of experience and I hope that she will become Madam President tonight.”

“I’d be really disappointed; I have not been planning for that. I have been helping in this campaign, It’s something that is unrealistic for me, I will be in shock. I have been pushing the movement for Hillary Clinton.”

Pattie Lee Pinion, a Democrat party volunteer also speaks of her confidence and admiration for Clinton.

“Clinton has so much knowledge, she is so full of wisdom and she is a very important person to me. I know she will do good because of all her knowledge. She is a wonderful person.”

“If Trump wins I won’t be very happy but I will just go with the flow because if he is our next president we have to respect him.”

“I am so exhausted with this election, every day from work to the head quarters, I’ve put my shift in and I’d still say we are going to win. We will win!” she added.

“It’s going to be very close I’m still confident that we are going to pull through and Hillary is going to be elected. It’s a nail biter It’s very close,” she said.

“I’m going to be really sad that we elected someone who has has said so many horrible things about so many different groups of people.”

“It (a Trump presidency) would be very bad not only for El Paso, but communities all along the border. He has repeatedly vilified immigrants, he has said Mexicans are criminals and rapists here in El Paso. “

“Many of us have Mexican ancestry and those comments are not only extremely offensive, but show how little he knows about the border.”

“His solution to the problem of immigration is building a huge wall, which is no way to fix our immigration problem. He has no real understanding of what on the border is like,” she added.

Isaac Trejo, biology student at UTEP, hopes for a Clinton victory, but was not completely sold.

“Hillary is going to win, but there is a slight possibility for Trump to win, It’s neck in neck”

I ask him how he would feel if Clinton wins. “Still moving to Canada,” he joked. “It’s a trade off, the good with the bad, destruction or corruption.”

“The idea that Hillary had emails, with a lot of secret stuff, seems pretty bad, and you have another guy, Trump who is a great businessman, but not great enough to avoid bankruptcy,” he added. 10:40 p.m.: The mood becomes more anxious, but people are still having a good time. “As long as we hold Nevada, we will be okay, but if we lose Nevada, uh oh,” a man says to his friend as he passes by.

10:45 p.m.: Trump wins Florida. The tension can be felt in the room, but at 10:49 p.m. Clinton clinches Nevada, the pressure in the room seems to have been relieved slightly. The crowd cheers and applauds the announcement. Clinton then goes on to win California at 11 p.m., a similar reaction is seen.

The atmosphere is still calm but tense. A man in the crowd jokingly asks me “Is there something you know that we don’t.” I showed him the results, “God-damn it, god-damn it,” he replies.

11:50 p.m.: Some people are starting to look fed up, others still look to be enjoying their drinks. Some in the crowd are are huffing and puffing with frustration. A little girl says to her mother, “But mom, most of the states are red,” the mother did not respond.

12:10 a.m.: A sense of panic begins to rise. “This is actually insane, what is happening?” asked one attendee. “It’s Russian hackers!” another man jokes. The crowd really begins to thin out.

12:25 a.m.: The cardboard cut-out of Clinton is taken down and carried out of the building. The Trump piñata never did come out. It seems like the Democrats have conceded that their candidate is going to lose. The goodbyes start. “We lost,” a woman says to her friend as she leaves the bar.

Gonzales was now sits with me. He has accepted Trumps inevitable victory. “I’m shocked! How did this happen?” he asks me.

Clinton calls Trump to concede at around 12:40 am. 1 a.m. – Only around 30 people are left in the dome bar. They seem to be hanging on for the inevitable truth. By 1:20 a.m. there are only five people left in the room.

Attorney Susan Godwin and her friend – retiree, Betty Halliburn – shared their dismay as to how the evening was unfolding.

“I’m shocked! Absolutely shocked,” Halliburn says. “I don’t know why this has happened. It looks like Republicans went out and voted and Democrats stayed home.”

1:40 p.m. – The result finally is confirmed as Clinton calls Trump to concede.

Gonzales is one of the few people left at the party.

“This night has been a shock to me, I never saw this coming. Something has gone wrong,” he says. “We put so much effort into this. Hopefully this will be for the better for our country. I will miss Hillary, but we need to know when to win and went to lose. I wish the best to Donald Trump.”

He is joined by Danielle McGill-Hinsely, an English teacher at El Paso Community College. “I’m mortified; I did not see this coming,” McGill-Hinsley says.

“I can’t even begin to imagine what the future holds now. I have friends and family who have been on affordable health care, are gay, of different ethnicities, and I’m a woman. I just can’t imagine how this is going to go well.”