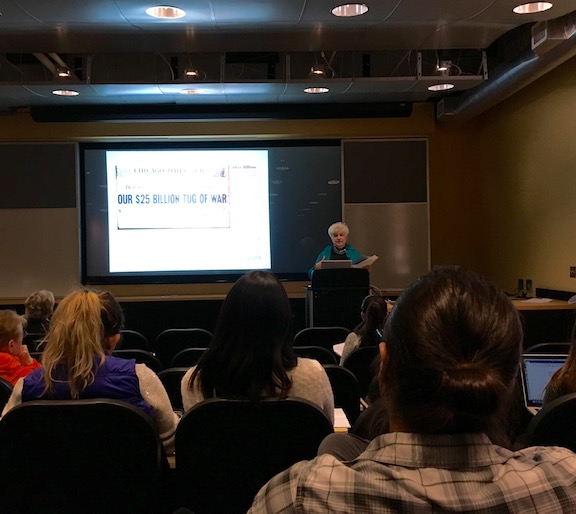 Molly Sinclair McCartney talks to an auditorium full of UTEP students about the “disastrous rise” of the military-industrial complex on March 31. Photo credit: Amanda Guillen

When veteran Washington, DC political journalist James McCartney passed away suddenly in May of 2011 from an aggressive form of cancer he left behind an unfinished manuscript about his decades-long reporting on the U.S. Military establishment.

After his death, several friends approached his widow, former Washington Post journalist Molly Sinclair McCartney, and asked what would happen to the half-completed manuscript on Jim’s desk at their Florida retirement home. At 74-years-old Sinclair McCartney is currently on a book tour throughout the country, recently at UTEP in El Paso, promoting the recently published book she co-wrote with her late husband four years after his death. “America’s War Machine: Vested Interests, Endless Conflicts,” was released McMillian in October of last year.

Sinclair said her late husband, who she calls Jim, had as a goal writing a book to decipher complicated government information about the military establishment and Defense Department into layman’s terms.

“Jim’s objective as a reporter and with this book was to make it something people could access. It was not intended for policy experts although it is a useful tool for them as well,” Sinclair said. “When you have a really big issue you want to break it down and make it as simple for everyone to get and understand as you can.”

An advocate of questioning government decisions, Sinclair provided this example of her husband’s journalistic skepticism. As they watched the news in 2003 of the U.S. invasion of Iraq after politicians announced they had “proof” the country had weapons of mass destruction, McCartney jumped up and shouted: “They have no proof, they have no proof.”

It was shortly after this event that McCartney began giving speeches and publishing columns pointing out the war was not justified because Iraq did not have nuclear arms. In 2009 he began gathering information for his book.

When Sinclair reviewed the unfinished work, she said she realized that the book was less than half way complete and would have to devote a great deal of time to complete the research.

In addition to reviewing the already completed chapters, Sinclair also combed through some 4000 of Jim’s daily stories published in national and international news media and now housed at the Special Collections Research Center at Georgetown University’s Lauringer Library. Sinclair also spent two months as a fellow at the Wilson Institute in Washington D.C., that provided her with a grant to help finish the work.

As a national correspondent, McCartney reported for more than two decades from about 30 countries, covered every president from Dwight D. Eisenhower to Bill Clinton and was a national security reporter for the Knight Ridder newspaper chain, which is now McClatchy. During his news career he covered stories coming out of the White House, Capitol Hill, the State Department and the Pentagon.

Sinclair, an accomplished journalist in her own right, has worked as a staff writer at the Washington Post, the Miami Herald, Atlanta Constitution, Houston Post and the Baytown Sun, her Texas hometown newspaper.

As she dove into the task of completing the research, Sinclair began to reach out and interview some of the contacts she and her husband had made as journalists. She made sure to keep up with daily news about national security and U.S. military actions in the world and also brushed up on reading archived material.

“America’s War Machine” focuses on the history of the Cold War to the present day and how President Dwight D. Eisenhower predicted the “disastrous rise” of the military-industrial complex which, now fifty years later, has become an unstoppable war machine that controls U.S. economic and foreign policy, Sinclair said.

In the book, Sinclair enumerates five elements that make up the “American War Machine.”

1. “The military, which influences and implements foreign policy decisions. About 20 percent of the federal budget goes for defense, which includes the Pentagon and other defense related activities.”

2. “Industry–defense contractors who make their money selling weapons and equipment to the U.S. Military.”

3. “Congress, which supports billions of dollars in military and security spending in a search for votes and campaign contributions.”

4. “The intelligence bureaucracy, which gives policymakers the data they want for military actions. A good example of this is the intelligence provided to the White House and then used by the Bush Administration as the basis for the U.S. invasion of Iraq in 2003.”

5. “The think tank hawks and interventionists who supply the intellectual rational for militarized policies that lead to interventions and wars.”

Although “America’s War Machine” hasn’t yet been widely reviewed or garnered much national media attention, Sinclair, who now lives in Washington, DC, travels the country speaking to students, book groups and at libraries on her own dime with the help of friends and acquaintances who she says are willing to provide her with a place to stay and a receptive audience.

“Where I’m at on the food chain you really have to make it happen,” Sinclair said. Before her recent stop at UTEP in El Paso she presented at New York University, the University of Arkansas, the Center for International Policy in Washington, DC and at several events in Miami.

She hopes that after reading her book and listening to her presentations the public will become more inquisitive about government and the military.

“Take what you hear, read or were told with a grain of salt,” she said. “There’s no black and white when there are claims made or positions taken. Look for the numbers, look for the statistics.”

Amanda Guillen is a multimedia journalism major at the University of Texas at El Paso minoring in women’s studies. She is editor of UTEP's campus newspaper, The Prospector. She has also worked as a reporter for Minero Magazine, a monthly bilingual publication at UTEP, She has completed internships with KVIA Channel 7 in El Paso and the Scripps Howard Foundation Wire in Washington, D.C.,