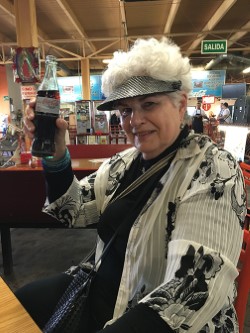 Former Washington Post reporter Molly Sinclair McCartney visited UTEP recently to discuss in detail “America’s War Machine: Vested Interests, Endless Conflicts,” the the book she co-authored with her journalist husband. The book is an in-depth exploration of United States interventions in the Middle East and the growing power of this country’s military establishment.

Originally begun by her late husband, the respected D.C. journalist James McCartney, and completed by Sinclair, it is a culmination of several years of research about the influence and growth of a war industry that includes the U.S. military, Department of Defense and Pentagon.

She sat down recently with students and faculty at the Sam Donaldson Center in the Department of Communication to discuss how she researched the issues raised by the book, published by St. Martin’s Press last fall. Sinclair said the completed product is what her husband, who covered the military and defense department for many years as a Washington, D.C. correspondent, would have wanted to see published, especially in the context of the foreign policy debates about the U.S. role in the Middle East currently playing out in the presidential race.

“I had terrific cooperation from everybody I trust, in suggesting interviews, which books to read, what materials to go through, and then they answered my questions so that I could get a fuller picture,” she said.

During her recent visit to campus, she sat down with UTEP Multimedia Journalism Major Jason Silva for a face to face talk about her work and details of her journalism career.

JS: How did the writing of the book start?

MS: “This was a book which my husband was working on when he died in 2011, and it was based on his experience as a World War II infantry soldier in Europe and also his reporting over his career which lasted probably 50 years. (It’s based) on (his) writing about national security, his writing about war and peace for the Knight Ridder newspaper chain. He took all of that and put it together and was giving speeches about it in his retirement. People would say (to him) ‘you really need to put this in a book’ which explains Washington and what we may not completely understand. That’s what he was working on when he died.”

JS: Did you encounter any obstacles in gathering the information and in writing the book?

MS: “I had terrific cooperation from everybody I trust, in suggesting interviews, which books to read, what materials to go through, and then they answered my questions so that I could get a fuller picture.

“The only obstacle I had was making sure I didn’t overbook something or misunderstand something. For example, there’s something called the green book which is a publication of the Department of Defense. It comes out every year. It’s like a bible… and it’s got every number you can imagine on the Air Force and the army. It’s sliced in a million different ways, you go through it and pick out a number at your own risk … It would be quite easy to pick out a number and misunderstand it. I didn’t do that. I went to the guys who knew these numbers and used them in their own work and I said, ‘tell me, what’s in the book?’ I don’t want to take a chance on getting it wrong… That’s what I was trying to avoid. These budgets and these bureaucracies are a swamp of information and you have to be very careful that you don’t get it wrong. That’s what I was worried about.”

JS: Is the purpose of government documents like the green book an effort by them to block information from the public?

MS: “No. It’s just one of the facts of life about these complicated bureaucracies. We have a big complex government. There are many smart people in government … They know what they mean, but that doesn’t mean you will know what they mean. So you have to be very careful about not misinterpreting something someone says or something you read… and that’s a big danger. So what you do as a reporter… is to find an outside expert, like an economist or a lawyer, that can look at those documents and explain what they mean so that I’m not on the hook for interpreting it wrong.”

JS: What do you expect readers to gain from reading the book?

MS: “I’d like them to use it as a resource. It offers an overview of the last 50 years of our defense establishment and the actions around the world of our military, both our covert as well as overt actions. I would like it to be a look at history so that going forward we know what mistakes we made and perhaps avoid them in the future.”

JS: A very important part of writing a book is the title. How did you decide what to call your book?

MS: “This was the title Jim came up with. It was a way to describe what (former President Dwight D.) Eisenhower talked about in his 1961 White House speech in which he warned about the dangers of the military industrial complex and those are two of the vested interests that Eisenhower listed. In his (McCartney’s) news coverage over the years he identified three additional elements of this complex: Congress, the intelligence community and the think tank community. So in his view you have five elements that are an expansion of that (military industrial) complex. He decided to call it “a war machine” because that’s what it is. It’s made up of those five elements, those five vested interests. If you read the book he makes the argument that those vested interests have led us to these endless conflicts around the world. That’s the meaning of it.”

JS: When you started working as a journalist what were you interested in reporting about and how did you come to write this sort of book?

MS: “I started working for a newspaper when I was in high school in my hometown in Texas. Over a period of time and by dealing with official statements and people telling me their positions, I learned along the way as a reporter that you have to go beyond whatever that press release is, or whatever that official says because there’s going to be other people with other views that need to be factored in. You learn that if you don’t do that, you are going to be burned. After you are burned a couple of times, you learn and next time you go beyond that source. You’d better have more than one source. You’d better have somebody else who’s studied this issue and is an expert who can tell you what the flaws are in the argument that’s being made.”

JS: If you were able to write a second part to the book what would you add to it or do you consider this a complete piece.

MS: “It certainly brings it up to the current (situation). If there were to be some additional commentary, I think it would try to bring in today’s events – what to do about Syria. What to do about the terrorists. Once (a book is) printed it’s gone. But I have done some op-eds since the book (was published) in which I talk about things that are happening today… The book is a strong argument to use diplomacy… it makes the case for why that’s better and how it can go wrong if you don’t use diplomacy.”

“For example, this is in the book: In 1962 we had the Cuban missile crisis, and the story that went out in the media said that former President Kennedy had been tough with the Russians, and they had backed down and took their missiles out of Cuba.

“Seventeen years later it turns out that the problem was solved, not by him being tough, but because he made a back door deal. He agreed to take our missiles out of Turkey in exchange for the Russians taking their missiles out of Cuba. But we didn’t know that for 17 years. One person that didn’t know this was Vice President Johnson. The lesson he got from 1962 was you got to be tough. So what happens with Vietnam? You got to be tough; we’re going to Vietnam. If he had known that the Cuban missile crisis was solved by diplomacy, it might’ve been a little different.

“One of the op-eds that I wrote had to do with that example and how diplomacy works. Maybe if people knew about it (how a crisis can be solved through diplomacy) they would have more faith in it and maybe we could use that to solve some problems around the world.”

JS: Have you had the chance to speak with someone that already read the entire book? What was their reaction?

MS: “I have had people that read the book approach me with a very positive response. Maybe, if they had a negative response, they wouldn’t have come to tell me. But certainly my friends who work in the area who read it thought it was exactly on the mark. Friends who don’t work in the area thought it was on the mark and beyond that I haven’t heard much in the way of negativity; although, I’m sure there are people out there that wouldn’t agree, like the neo conservatives. They have completely different views. We heard some of that in some of the NPR interviews on the 10th anniversary of the Iraq war and they were still defending that decision.”

JS: What would your husband have to say about your finishing his book?

“He hated being edited. There are times when a reporter never wants to be edited but (the book) is better because of the editing. Also, his son Bob, who is also a journalist, was thrilled that I was able to finish the book. His response was: ‘I’m only sorry Dad wasn’t here to see it.’”