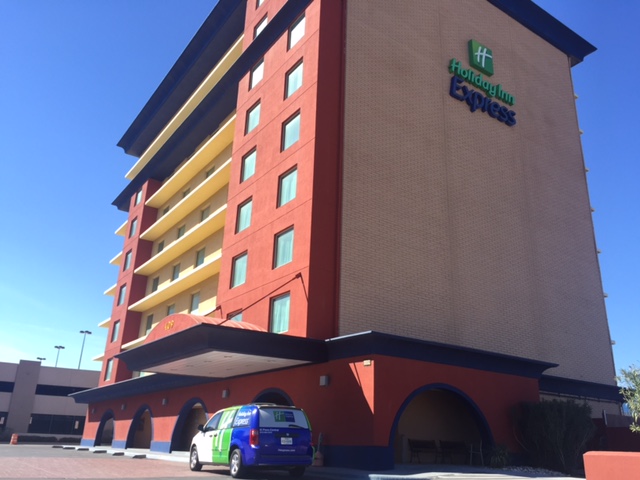 EL PASO — The “Two Nations, One Faith” visit from Pope Francis to Cd. Juarez has brought national attention to the border region, but not a lot of travelers looking for a place to stay in El Paso.

The Catholic Diocese of Juarez is expecting 220,000 people to attend the Mass celebrated by the pope on Wednesday. Thousands more are expected to line the streets of Juarez hoping to catch a glimpse of the pontiff. And, one the other side of the border in El Paso, thousands are planning to receive a blessing from the pope while attending a simulcast of the papal Mass in the Sun Bowl on the UT El Paso campus.

However, there are no official estimates of how many people are coming in from out of town and expected to stay in El Paso. According to the Visit El Paso website, El Paso has approximately 9,600 hotel rooms citywide, with 675 of them located in the downtown area, a convenient location for visitors who are wanting to cross the border for this historical event.

As of Monday afternoon, the Holiday Inn Express in downtown El Paso was sold out for Tuesday, Wednesday and Thursday of this week. Two other major hotels downtown within a few miles of the border, The Doubletree and Camino Real both said they still had “substantial” availability.

“I was surprised by the lack of phone calls that we have been receiving for those days, especially since we are located downtown and so closely to the border.” said a woman who identified herself in a phone interview as a front desk clerk at the Camino Real.

Valerie Anne Garcia is director of sales and marketing development at TMI Hospitality, which represents Staybridge Suites and Holiday Inn Express and Suites in El Paso. She said it isn’t surprising that while Juarez hotels are all sold out, there are still rooms available in El Paso.

“This is a Mexico event,” she said.

Garcia attributed the lack of visitors to El Paso for the border Mass to several factors, including that many in the U.S. traveled to see the pope a few months ago in Philadelphia. She added that many others may not have passports or are concerned by the uncertainty of being able to cross back over to the U.S. side amid traffic congestion after the event.

And, despite hotels being sold out in Juarez, some people are making other arrangements, Garcia said.

“Churches (in Juarez) are offering availability for volunteers and family to stay there.”