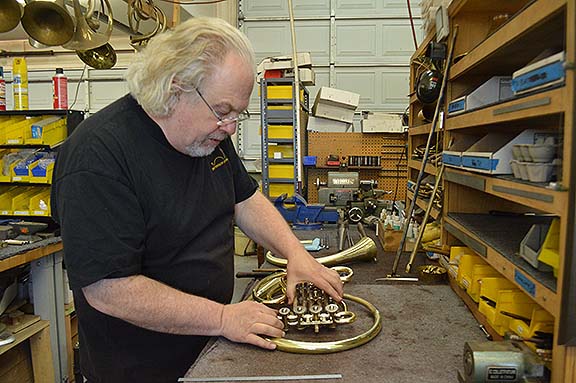 LAS CRUCES, NM — The best things in life are made by hand and that holds especially true for Jim Patterson of Patterson Hornworks, currently one of a handful of designer-makers of custom hand crafted French horns in the U.S.

Patterson and his wife Cora work together from their home with their sons, Philip and Ian. They have lived and worked here since 2005. This unique world-class instrument making facility started with a repair shop in 1995 in the Los Angeles area.

“This all started from doing repairs,” says Jim as he looks over a Double Descant French horn brought in by a customer.

Jim, 59, originally from the Los Angeles area, started his musical career at an early age. When he was in middle school, he would take instruments apart, and put them back together. All through school, Jim loved performing in the band, and in high school he would also fix any broken band instruments. His parents did not support the idea of a repair shop, or a musical career but Jim loved music and working with the instruments. “Sometimes you just need to do what you love, to be happy,” he said.

“I always had a love for music, but I never imagined what it would become.” Cora, Philip and Ian help Jim create some of the best custom- and hand-built French horns in the world. They work diligently to give their customers the best satisfaction possible.

“We always take great pride in what we do,” says Cora as she polishes a Patterson Triple Horn.

Cora, 53, is a University of Texas at El Paso graduate and native of New Mexico.

“The reason we came to Las Cruces was because of family and location,” says Jim as he helps his wife solder some braces. “We saw it as a great opportunity to start the business and get out of the L.A. city lifestyle.” In Los Angeles Jim was continuously busy with repairs from all the horn players, but once he started in Las Cruces, he began to design and build horns using his own new ideas.

“We can build whatever you want,” Jim says. His trademark innovation, the Patterson Hornworks Triple Horn combines elements from the Double Descant and the Double French horns. A customer had asked if the triple horn idea was even possible for Jim to build and Jim made it possible, building 23 in the last two years. The silver-plated Patterson Hornworks Triple French horn sells for $18,000. The triple base brass version goes for $17,000. People always try to cut corners, but with musical instruments the quality of the sound is what people pay for, Jim said.

“Our custom Double horn sells for $9,250 and that sounds like a lot, but people bring in a $5,000 Yamaha French horn that needs modifications and repairs, and end up paying what they would have paid for the $9,250,” Jim said. “If you want quality, you have to pay for it.”

The Patterson’s horn sound fits right into the Hollywood sound of the horn. In fact, several of his horns were used throughout the movie Avatar and other major motion pictures. Currently Pershings Own Army Band and Army Field Band combined have seven Patterson horns and the UTEP symphony has three – with Professor Lambrecht also playing on a Patterson Hornworks Triple horn.

“We get some of our parts made all the way from Germany, where they still know how to make things the old way. Everything in a Patterson horn is completely made by hand, down to the valves and stems,” Jim said. The Pattersons make nine different models of the three designs (Double horns, Double Descant and Triple horns). The Patterson horn is so unique that once it’s heard, no other horn can compete with its beautiful notes. “We love what we do and we love music,” says Cora as she calls the shop crew in for lunch.

“We work together, eat together, play together, but most of all stay together when it comes to this family business,” said Jim. “I don’t know where I would be without my family.”