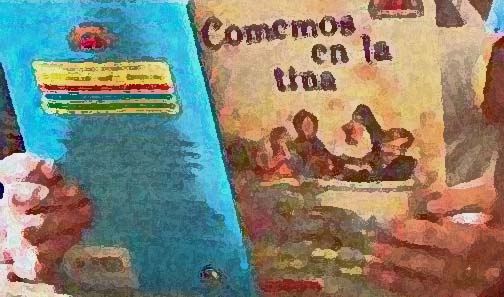 I grew up in Alamogordo, New Mexico, a 90-minute drive from El Paso. As a 9 year old child, I began learning Spanish from Señora Ramirez, my tutor for five years. Señora Ramirez was Mexican American.

At the time, I struggled with the notion that after school I had to go right back to class to study Spanish while my brother was at soccer, tennis or hockey practice. Completely unaware of how invaluable the ability to read, write and speak Spanish would be to me, I continued to take Spanish lessons to please my mom.

When I asked her why she wanted me to learn Spanish, she told me that it was really my dad who insisted because he believed that, with the large and growing Hispanic population in the U.S. Southwest, any child growing up in Texas, New Mexico, Arizona and California should be able to speak Spanish by the time they graduate from high school.

Although neither of my parents speak Spanish, my mother’s father did. My grandfather Miguel Garcia, a native of La Luz, New Mexico, had learned the language from his parents. My great grandfather Manuel Garcia was born in Spain and my great grandmother, Katerina, moved to New Mexico from Mexico.

Even with her Hispanic roots, my mother – who was born in Alamogordo – never learned the native language of her parents. And my father, who was born into a U.S. military family stationed in Puerto Rico, never became fluent.

Gracias a Dios, I listened to mom.

Learning Spanish has allowed me to embrace the rich Hispanic culture that inspired my decision to move to El Paso and finish my college career at the University of Texas at El Paso. I’m constantly trying to practice my Spanish because, not only is it a beautiful language, but it is becoming extremely important to my generation – the Millennials – to speak multiple languages. When I meet people from outside the United States most of them are bilingual, or in some cases multilingual. In the U.S. it’s less common to come across people who know more than one language. I find this sad but, at the same time, a motivation to learn another language.

From a personal standpoint, I’m grateful I stuck with it.

My boyfriend’s family is bilingual. He dad was born in Leon, Mexico, and his mom is Mexican-American. At home they speak mostly Spanish. After I started dating Enrique, I felt pressure to speak perfect Spanish around them and could tell his mother felt the same about speaking English when I was around.

Somehow we’ve learned to overcome our language insecurities. Having become more comfortable over time speaking to each other, I’m not shy now about asking her to clarify something she says or the meaning of an unfamiliar Spanish word or phrase. She is equally comfortable now asking me to proofread her New Year’s English text message to her friends.

Three years later, my confidence, vocabulary and understanding of Spanish have grown tremendously. Not long ago at a family event, during a conversation in Spanish, a family friend interrupted the discussion to remind the group to speak in English out of respect for me.

Enrique’s mom glanced at me with a smile and said “No, Kc understands Spanish. What are we talking about Kc?” Although I don’t follow soccer, I was proud to explain that we had been discussing an upcoming soccer game, and that most of the people around the table wanted the city of León’s team to defeat the other team from Pachuca, Hidalgo.

My early Spanish lessons have also enhanced my journalism studies. I’ve been able to interview Spanish speakers in their own language. An example was my interviews in Spanish with Mexican housekeepers and nannies working for families in El Paso. Speaking to them in their own language created a strong bond of trust between us and allowed them to share more about their personal lives. This story was eye-opening and difficult to write because I had to divorce my sympathy for the workers from my objective reporting about the issue.

My ability to report this story then led to a decision to focus my college reporting on immigration issues, and take a wintermester class on immigration law. As a staff writer for Borderzine, I also wrote about a push for municipal IDs in El Paso for the undocumented and others without identification papers; a story about Mexicans who do their shopping in El Paso; and another about a human rights activist priest from Oaxaca, Mexico. As I transcribed Father Alejandro Solalinde’s interview for my story, there was a moment while listening that I felt a wave of gratification for having the ability to comprehend such a meaningful dialogue in Spanish, a language that becomes more meaningful to me every day.

Before all of my important interviews, I ask my fluent Spanish-speaking friends to look over my translations so I make sure to ask the right question that will allow for the honest answer.

As I approached graduation and the next chapter of my life as a media professional, I did so with the conviction that my modest bilingual ability will be as important in my professional life as it has been personally. I am hoping to enter a field where I can combine my journalism, marketing studies and interest in the fashion industry.

My plan after graduation was to spend the summer studying abroad in London, Milan, Paris and Florence. I received advice to learn the common phrases in the native language for each country, but also to use Spanish before resorting to my native English. My hope is that I will continue to grow in my abilities to communicate in Spanish, but also add French and Italian to my multilingual bucket-list.