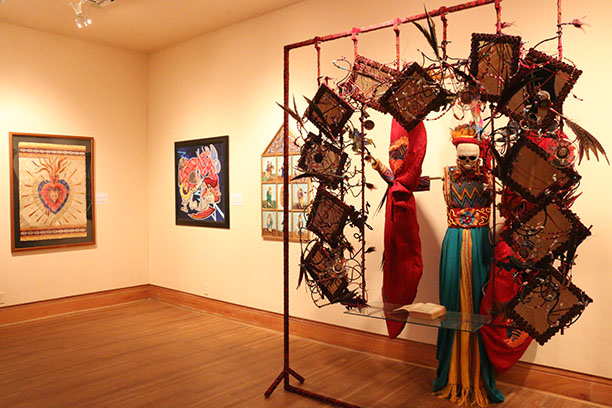 The UTEP Centennial Museum opened its doors to the Icons & Symbols of the Borderland exhibit this past October, featuring art from 22 JUNTOS artists, demonstrating the story of the borderland, through their own personal interpretations.

Founded in 1985, JUNTOS Art Association is a non-profit organization promoting cultural appreciation of the diversity of the border community through the arts.

The exhibit was the brainchild of artist and curator Diana Molina, who is also executive director of JUNTOS. The objective of the exhibit is to “provide a more powerful depiction of the borderland,” by including a diversity of artistic representations of the border.

According to Molina, many of the personal interpretations in the exhibit take into account the European and Indigenous influence on border culture. “It is very deep and thought provoking,” she said. The exhibit is divided into three categories: Environment, Food and Drink, and The Sacred and Profane. As you enter the gallery, there are portraits of Mona Lisa dressed as La Virgen de Guadalupe, an agave giving birth to a child, and sculptures of life-size “catrinas,” skeletons, wearing mustaches, to name a few.

The exhibit is a way for those who visit to relate and “see their own story, and also gain further insight into that very colorful border experience and all that it accomplishes,” Molina said. She believes the exhibit is relevant to border region because the icons and symbols in the show are “key to what we are as a community here in El Paso and how we connect to the surrounding regions as well.” Wayne Hilton, one of the most recent members of JUNTOS and creator of La Mariposa art piece, featured in the Sacred and Profane section of the exhibit, says he is very excited to be part of the exhibit. Inspired by Mexican printmaker and engraver José Guadalupe Posada, Hilton’s work represents position, femininity and wealth.

UTEP Music major Edgar Mario Ramos is one of thousands of local residents who have visited the exhibit. “I like what I’m seeing,” said Ramos. He admitted to never experiencing anything like it before.

Centennial Museum Director Maribel Villava said that 2,500 people have visited the museum since it opened October 10.

“What’s great is that each of the artists in the exhibit has a following, so their supporters are coming to see the exhibit,” Villalva said. “People are also coming to the museum for other reasons and are pleasantly surprised to come across this great show.”

The exhibit runs through January 16.