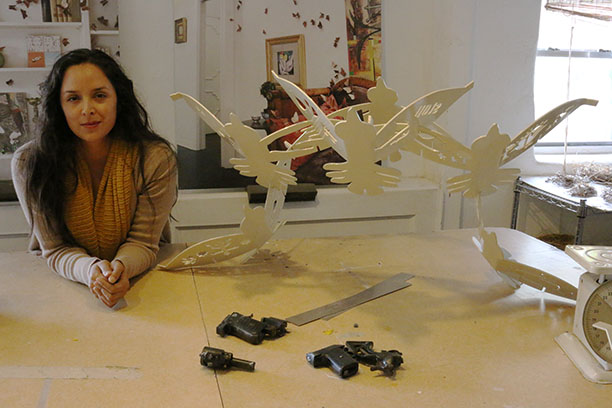 EL PASO — Translucent white porcelain clays, rulers, pencils and pieces of guns are scattered in Margarita Cabrera’s workspace as she peacefully sits inside her sanctuary surrounded by her sculptures and creations.

Cabrera, a local sculptor, educator and mother of two, focuses her art on the difficulties related to immigration.

Cabrera, 42, was born in Monterrey, Nuevo Leon, Mexico, but moved to the U.S. at around the age of 10, when her family was in search of better opportunities. Her inspiration to become an artist began in childhood. She said she was raised as a “Montessori child,” where she was taught different concepts through sensorial activities.and that “tactile experience” allowed her to “communicate her expressions artistically.”

“I am a sculptor and object maker and I tend to feel and experience sculptures with my whole body,” she said.

Cabrera has been creating her art for more 20 years. She studied sculpture at the Maryland Institute College of Art, and received her MFA in Combined Media at Hunter College in New York. Her art has been exhibited in major museums such as The Smithsonian Museum of American Art, the Museum of Fine Arts in Houston, and The Seattle Art Museum, to name a few of many.

“Being part of the Smithsonian Museum of American Art collection is one of my proudest achievements as an artist,” Cabrera said.

She also engages in community and public art throughout the country in university programs and gallery exhibitions. According to Cabrera, she believes that although very rewarding, “engaging the communities with works related to important social or political issues is very challenging.”

She considers her UPLIFT project, to be her most successful work of art yet. The sculpture, which grew out of a theme of violence on the US/Mexico border, was a public installation in El Paso’s Upper Valley. But shortly after it was installed in March, UPLIFT was taken down by city workers due to complaints from the Love Road Neighborhood Association. The complaint reportedly was over how gun pieces were incorporated into the sculpture.

“The reaction to the UPLIFT project has clearly exposed a certain stance in the community regarding our history of violence,” said Cabrera. Although she says that was not her intention. Cabrera said she only wishes to have the sculpture installed back where it belongs, to “celebrate the community and its makers.” A model of UPLIFT is currently part of UTEP’s Centennial Museum’s latest exhibit Icon’s and Symbols of the Borderland, curated by Diana Molina. Museum Director Maribel Villava believes “all of the pieces in the show, to include UPLIFT, are wonderful examples of the theme “Icons and Symbols of the Borderland,” due to the fact that each piece tells a unique story and a different perspective about culture and border life.

“It’s great for audiences to experience all of these different points of view. That’s what makes this a wonderful collection,” said Villalva.

Other challenges faced by Cabrera have been the ability to balance her family and career life.

“One has to find the necessary support from community and family to succeed as an artist,” said Cabrera.

Although her priority is motherhood, she must “be creative just to carve out additional time to be an artist and have a successful art career,” she said.

Additionally, it has also impacted her approaches to work as she has focused on more community-based platforms to develop her art.

“Motherhood has certainly given me a more relational perspective in life,” she said.

Aside from being an artist and full-time mother to her boys Mateo and Alexander Bailey, Cabrera enjoys collecting bird’s nests she sees as “beautifully weaved structures created with such interesting combinations of fibers, and different kinds of sticks and grasses that birds find.” While taking walks when traveling, she occasionally comes across nests lying on the ground.

“These natural forms are structurally magical and the metaphor of a nest as “shelter”, is something I like to contemplate,” said Cabrera

She is currently working alongside artists Daniel Carey-Whalen and Lorena Aguirre on a project titled “Nidos Para Niños.” The project’s focus is on Central American minors in detention centers throughout the nation.

The future holds many new projects for Cabrera. She will be working on an exhibition named Design and Craft Today in Mexico/USA: Beyond the Stereotype into a New Aesthetic Paradigm held at the Craft and Folk Art Museum in Los Angeles, CA, curated by Lowery Sims. She will be participating at a show at the Museum of South Texas, titled TARGET TEXAS: The Meaning of Mixed. In addition, she will be part of the Space in Between collaboration held at ASU at Tempe Arizona as well.