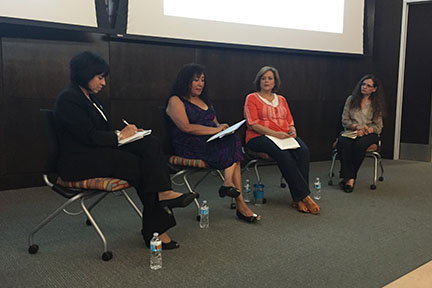 EL PASO –Twenty years ago, Maria Elena Ramos Rodriguez faced the difficult task of finding foster homes for four possibly HIV-positive babies born to mothers who were heroin addicts and were already infected with the virus.

“Luisa had captivated me the first time our sight met,” said Ramos, 57, director of community projects for Programa Compañeros and a long time Juarez activist who has worked on behalf of women’s health issues on the border..

There was little chance that Luisa, one of the babies who was a week old and had been rejected from various facilities, would find a home because of widespread fear among potential caregivers who were afraid of contracting the disease.

Two decades and many tests later, Luisa is a healthy and HIV-free 20-year-old thanks to Ramos, who accepted her temporarily and eventually adopted her.

“I felt so much tenderness when she looked at me for the first time with a wide-open smile. Since that day, I have loved her profoundly,” said Ramos, who speaks in a soft and gentle voice. “The greatest thing that life has handed me was the chance to meet Luisa’s mother through Programa Compañeros and help her by adopting Luisa.”

Ramos is also co-author of a recently published bilingual book, “Salud, Género y Empoderamiento,” along with other women writers from the El Paso-Juarez border region. The book is a collaborative effort to shed light on public programs, like Programa Compañeros, that help empower women whose life circumstances put them at risk for major health issues. “The main people illustrated in this chapter are women – women who live in different situations than the women sitting here,” she said to a group of mainly women at a book presentation in September at the University of Texas at El Paso. “These are women who use drugs and who live in conditions of utter vulnerability, but they are also women who have a lot to give and a lot to teach.”

“I fell in love with this process for the strong capacity it has of empowering the person on the other side of the investigation. Individual psychological empowerment begins when people learn to control the situations that concern them,” she said.

The women interviewed for the 220-page book have been susceptible to lack of services that increase risk of unwanted pregnancy, HIV infection, depression, death due to overdoses, and other illnesses. All of the chapters aim to raise awareness and recommend what similarly vulnerable women can do to tap into services that are available in the border community.

In Bibiana Mancera’s chapter three – HIV risk-behavior knowledge among Mexican and Mexican American women along the U.S.-Mexico border: implications for health practices in clinical community settings – 46 percent of the 98 at-risk women interviewed for her chapter did not know how to properly use a condom and 33 percent had never been tested for HIV.

Mancera, project manager for the Hispanic Health Disparities Research Center for the Nursing Department at UTEP, said that women in her study did not know that latex was the best product for a condom, nor were they aware that when they saw someone that appeared to be healthy, it didn’t mean they were. These women also told her that they never thought to ask their partner whether or not they had been tested or exposed to HIV AIDS.

“We take it for granted that in this day and age, many of us know about HIV risks, so we are hoping that through this publication, we are able to reach more people, clinicians and practitioners who will see the value and understand that there is still a large percentage of the population who still does not know that they are at risk for HIV AIDS,” Mancera said.

According to Dr. Eva Moya, who wrote chapter one, Access and utilization of reproductive services in El Paso, Texas. An explanatory study, Ciudad Juarez has helped El Paso meet some of the needs in sexual reproductive health, but the depletion of resources by the state of Texas’ decision to stop funding the Planned Parenthood organization demonstrates the need for greater advocacy of women’s health.

“Are we bringing Planned Parenthood back? I’m not sure, given the draconian politics of the state around gender needs,” Moya said. “We are the only city in the U.S. of this size that does not have a Planned Parenthood facility. That is unacceptable,” she added.

Overall, the book has been strategically mailed out to politicians and others across the United States, Mexico, Spain and England thanks to Universidad Autónoma de Ciudad Juarez, who printed 400 copies to distribute. Chavez said the book’s goal is to reach people who have a significant impact upon the political decisions regarding women’s health made in their region.

“It’s good to establish these voices, whom I refer to as conscious voices because they actually live through these difficult situations,” Ramos said, “They have a different kind of power to say things.”

These women now have stronger voices thanks to the authors of “Salud, Genero y Empoderamiento” that have dedicated their lives to research and social work.

“I studied social work because I was always interested and involved in what was happening in my community and social work gave me the opportunity to first-handedly help the people around me. In turn, it gave me the chance to learn, receive and adopt Luisa, my child,” Ramos said.