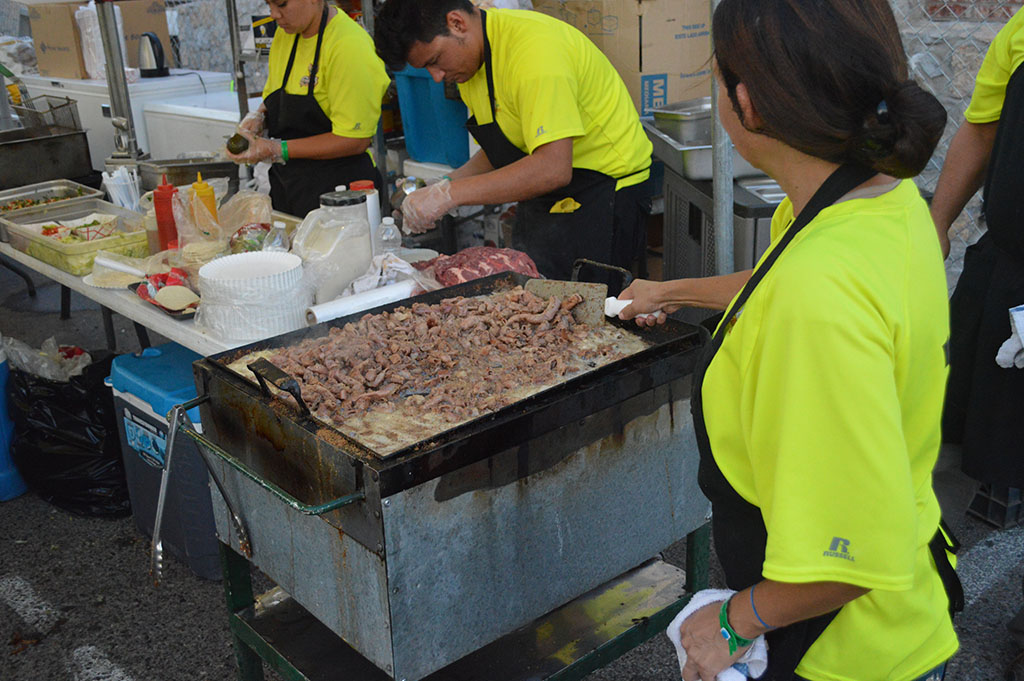 Cooks from Delicious cooking up their beef tacos

As El Paso native Monica Maldonado sipped a refreshing aqua de horchato and sampled crispy chicken flautas at the 2015 Mexican Food Cook Off in Union Plaza, she admitted being a little embarrassed that this was only her first time attending the event.

“While I was standing at the food truck I was talking to two ladies who came all the way from California to El Paso. It’s their third time coming here and I live in the North East and had never heard of the event up to this year,” Maldonado said.

But many El Pasoans did turn out Sept. 18 to enjoy the festival atmosphere and sample the tastes of local restaurants like Desert Rustic Kitchen, Delicious, Molalam and Taquizas. Top chefs went head-to-head representing the kitchens of Around the World catering, County Inn and Suites, Crave, Mesa Street Grill and Tabla.Competitors presented their signature dishes and mixed drinks.

Local taqueria Taquizas was looking for a repeat of winning the Best Mexican Food crown, which they picked up the last two years with their signature tacos al pastor. Tabla’s tacos ready to be sent out to judges

But, Tabla chef Matthew Herrera was hoping to win the judges over with his Baja fish tacos, which he prepared with locally sourced ingredients from El Paso and New Mexico,

“Well, I’m a native El Pasoan and what I’m trying to do is bring Mexican food that’s from this area. I don’t know about Mexico city, I love the food I love the mole but we have a different set of ingredients and a different culture. So I hope that comes through with our food and shows that our Mexican food is El Paso,” Herrera said.

So what were the judges looking for when judging the dish? Brad Dubow, general manager of KLAQ kept track of the judges scoring and explained that they were considering taste, presentation, appearance and the aroma of the dish.

Although the audience didn’t have a say on who would be the winner, Rossana Gutierrez still gave her support to Taquizas tacos.

“Being a native from El Paso I know what a taco should look like and this is a real Mexican taco. The way it’s supposed to be, with beef ,salsa and cilantro. That’s all it needs,” Gutierrez said.

And it turned out that the judges agreed with Gutierrez and gave Taquizas its third win in a row. This is the fifth year the Metro PCS has sponsored the cook off, said organizer Veronica Hernandez. The event location used to be on the far West Side next to Wet N Wild Water-World, but was relocated to the Union Plaza area of Downtown El Paso.

“We expected the crowd to be bigger, but since the location was too far out we didn’t get the outcome we expected. We have been getting a larger crowd now that we moved to downtown,” Hernadez said.

In addition to the food and artisan vendors, the cook-off offered mariachi music, crafts for children and games like loteria for the whole family.