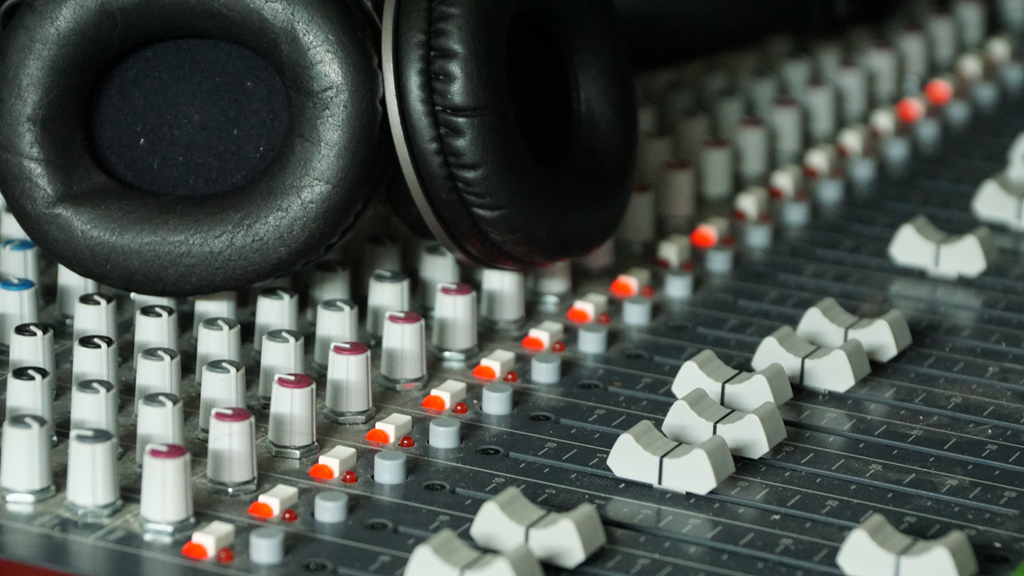 EL PASO — Before digital, building a quality music recording studio meant spending tons of money for gear or paying professional studios $1,200 a session, but advances in recording technology have made it easy for anyone with a computer to create affordable professional recordings at home.

“It’s amazing what you can do with today’s technology,” said professional musician David Hamilton, who began his dream of creating a home studio in 1990.

“It has taken me over 20 years to get all this,” he said as he pointed to the computers, keyboards, mixers, instruments and other gear filling a converted dining room of his East Side home. Hamilton, who plays bass in several bands – including the popular El Paso retro-disco band Fungi Mungle, uses his 12×12 studio to create recordings for himself as well as a stream of extra income for his family. He has recorded commercials for local businesses as well as session work for other bands, some in other states.

While he has spent many years and thousands of dollars building up his recording outfit, Hamilton said there are now less expensive options available for newcomers who can start with a few key components.

Getting started with a simple home studio consists of five basic items that can be chosen based on personal taste and the quality of music is to be produced, according to Hamilton.

The first item is the most important — the computer. The operating system of a Mac or PC is a matter of personal preference, but Hamilton emphasizes that the Mac is the most popular for recording music.

“I have used both operating systems, but Mac is my favorite,” he said.

The recording process can take up system resources, so any system needs to have ample RAM memory and a high-speed processor. And, because recording files are often very large, the computer needs to have a hard drive with at least one terabyte of storage space.

“Without an adequate computer, it will be difficult to get good results,” Hamilton said. The next essential item is the Digital Audio Workstation (DAW). This editing software is installed on the computer system and will allow communication between the instruments and the computer.

“Pro Tools is the industry standard DAW, but it can get a bit pricey,” said music producer and recording engineer Eric Boseman from El Adobe Studios in El Paso.

Pro Tools, by Avid, can run about $900, but there are other programs that can get the job done without breaking the bank such as Cubase ($350-$500), Sonar ($100-$500), Abelton Live ($500).There are even free programs available like Garage Band for Mac users and Audacity for PC users, but these programs often have limitations on the number of tracks available and other features.

An audio interface is needed to transfer the sound into the computer and the DAW. This is a piece of hardware with inputs for microphones or direct lines to instruments. To record more than one track at a time, each track requires an individual input. For example, to record a drum set using four microphones, the audio interface will need four inputs. The most popular and affordable brands: Presonus, Avid and Focusrite interfaces are perfect for beginners and range between $100 and $300. Hamilton’s favorite piece of equipment in his setup is his higher-end Focusrite Scarlett 18i20 Audio Interface that cost him $500.

Choosing the right microphone for a studio is vital to the sound quality desired. Sound quality of microphones vary and can affect the end product. Cheap mics tend to have a weak sound. There are two types of microphones that are commonly used in recording studios, dynamic and condenser. Dynamic mics like the $99 Shure SM58 and the $350 Shure SM7B are the most popular mics used in studios today. They do not need a power source and tend to have a more robust sound. Condenser mics like the $230 Rode NT1A and the $700 Neumann TLM 102 are louder than dynamic mics and are best used for recording vocals. According to ehomerecordingstudio.com, the $350 Sennheiser MD421 is widely regarded as the “best all around dynamic mic” on the planet and the Neumann TLM 102 is the “Holy Grail” of vocal mics.

The last key item for a home studio is a monitoring system to hear the playback of the recorded music. This can be the use of studio-quality speakers or professional quality sound canceling studio headphones. Both of these can be purchased for around $100.

Getting the word out

The introduction of home recording software and the capability to compress audio files into a smaller size without sacrificing quality has made it easy for artists to distribute their music over the internet. Websites such as MySpace, Reverbnation, and Spotify or YouTube are popular showcases for musicians.

For some musicians, YouTube has connected them with a huge following without having to tour the United States or abroad.

“You have musicians who don’t have record deals, but they have like a million hits on their videos,” Boseman said.

Video: Getting the acoustics right in the studio