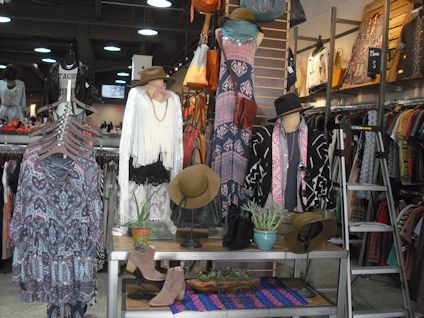 EL PASO — Opening to a huge crowd here this summer, the first Uptown Cheapskate store in this area specializing in used clothing, shoes and accessories aims to bring affordable fashion to students, young professionals, and those simply looking for a great buy.

According to owner Kevin Drennan the store opening on August 27 drew the third largest crowd in the history of Uptown Cheapskate store franchises, resale stores with a particular point of view. “The difference between thrift and resale is we’ll pay you cash for your clothes, whereas thrift will just take your items and don’t pay you anything for it. Consignment gives you fifty percent of the profit from an item after they sell it,” Drennan said.

The first franchise of the company opened in 2009 in Salt Lake City, Utah. The company now has 40 stores in 17 states. The shop offers designer brands and trendy clothing items, including shoes and accessories for men and women. There is something for every occasion including a night out, an interview, or a costume party. The El Paso location of Uptown Cheapskate at 2900 N. Mesa St. is owned by Drennan and his wife Jessica, who was once an employee for Buffalo Exchange, also a resale franchise. The couple eyed the Mesa location for years before finally purchasing the space. Accessible parking and lunch-time traffic were two of the biggest draws to the location. The location in Miner Village Shopping Center makes the store more visible to its target audience.

“We knew we wanted to be by the university. This is one of the better shopping centers for parking and parking is important when people are trying to bring their clothes in,” Kevin Drennan said. Emma Weatherly,a featured twirler on the University of Texas at El Paso marching band, said she has bought items from Uptown Cheapskate to use with her costumes.

“I wear accessories with my twirling costume that I bought from there. I found some really great earrings that complimented my costume very well,” Weatherly said. Weatherly also said she made more than $130 dollars at the store just by selling clothes she had hanging in her closet. She was also able to buy some merchandise for herself on opening day.

“I was able to buy things like Lululemon workout pants, a Juicy Couture jacket, and a Kate Spade purse,” Weatherly said. Customers looking to sell very high end items such as Louis Vuitton and Prada may prefer to sell online. Since Uptown Cheapskate is about selling clothes at affordable prices, certain high-end items can be valued at over $1,000 making them unsellable to their target audience.

However, Drennan said they love to see high-end items that are great bargains. “We had a Jimmy Choo purse worth $2,000 that we sold for a couple hundred dollars,” Drennan said. Any designer items are checked for authenticity before being put on the shelves for sale. Drennan says it is easy to tell when an item is counterfeit and it becomes easier to tell the difference between fake and real over time.

The store also sells pre-owned merchandise from H&M and Forever 21 that may not be considered high-end but are out of season and cannot be found for sale in their original stores anymore. The shop employs those who are passionate about fashion, including some fashion students and people who have enjoyed working in fashion retail before.

Uptown Cheapskate donates clothes it does not sell to local charities, including the Center Against Family Violence. He said that the women at the center get first pick on the clothes and whatever is left over goes into a parking lot sale during the week to raise money for the charity.

The overall purpose of Uptown Cheapskate is to provide El Pasoans with more affordable retail choices.

“We want people to have a place where they can have a conversation about what’s trending, what’s cool, what’s new, and be able to afford it,” Kevin Drennan said. “The whole point of this is bringing affordable fashion to the masses.”