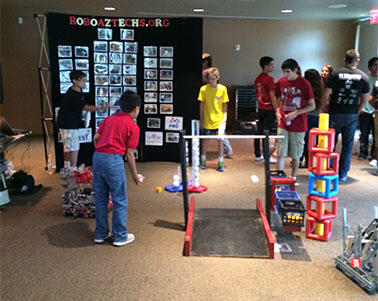 EL PASO — The normally quiet atmosphere of the library with the faint aroma of musty books waiting for stories to come alive is interrupted by the laughter of children ordering brightly colored robots to launch a ball through a hoop, pick up litter and put it in in the trashcan.

They love the idea of being in charge of the robots they created with Legos and electronics at the Esperanza A. Moreno Regional Library on Pebble Hills Road where they learn teamwork — working together to complete a project.

“The kids don’t just like to build them, they like to decorate them too,” says Gerardo Sanchez, a teacher of computer science at El Dorado High School. Some robot kits reach a height of six feet and weigh in at around 120 pounds, and can cost more than $7,000. The extra parts can cost some $3,000. The completed and tested robots will eventually find their way into a robot competition.

Lately the libraries have been expanding their programs but robotics in particular is making real headway. In October, this library will begin the first ever robotics program for kids, teens, and adults.

Juanita Kamalipour, a retired teacher of business education in the Ysleta District, has been trying to get more people involved at the library. Along with Kamalipour and Sanchez who is in charge of the robotics program at El Dorado.

Kamalipour, employed as a librarian for the past seven years, said she always encourages the children to go for more education. She applied and received a  grant from the Institute of Museum and Library
Services and the Texas State Library and Archives Commission in August to fund the robotics program and a health care program for adults.

The grant allows the library to teach at least 45 sessions. “I would like to draw all types of people to the library so they can take advantage of the benefits,” she says as she helps a patron look up books on a computer.

Once exclusively a place of books, the library now includes a successful robotics program. Sanchez said his students will be going to the Esperanza Library every Saturday starting in October to help teach and conduct class in order to build a better engineering experience for the community in general.

The robotics program at El Dorado is starting a fourth year and has won trophies in their division. “I think teachers are scared to ask for the grants to have programs like this around El Paso. Maybe they think it’s too demanding.” Last year the El Dorado High School Robotics Team won first place in every competition but one because of a battery. “All it takes to lose could be an overheated battery,” Sanchez said.

Sanchez said he loves teaching and loves building robots, so working with Kamalipour at the Esperanza Library is perfect for him and his students.