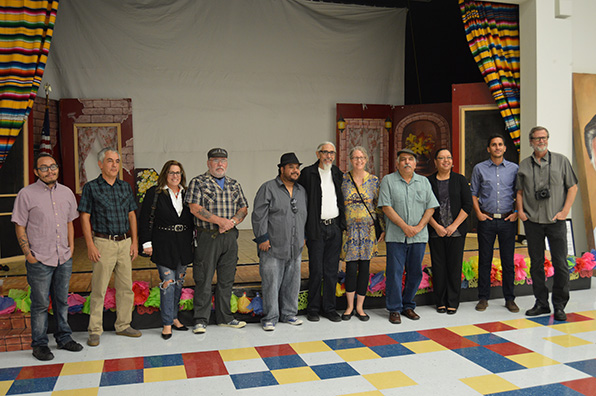 EL PASO — In one photograph an old baby doll lays crippled on the harsh gray street, one eye-socket empty, one leg missing. In another photo a shoeshine man works fevershly on a cowboy’s boots.

The reality of border life seen through the lenses of 12 El Paso area photographers is on exhibit at Fotos Septiembre: Through the Eyes of Borderland Photographers (originally titled Foto Septiembre – Visual Stills Along La Frontera) through October 23 at the La Fe Culture and Technology Center’s Galería Aztlan.

All the works show and represent Chicano heritage. This is the exhibition’s second year showcasing professional and amateur photographers. The idea for the show germinated three years ago when exhibit curator Federico Villalba was invited to participate in a show that needed new artists. He recommended long-time photographers, Arturo Enríquez and Vallarie Enríquez. The show went so well, he said, that the following year he was asked to curate another exhibit.

“I asked Arturo and Vallarie if they wanted to be participants and co-curate the exhibition together. We sometimes do things like artistic conspiracies. They were game, so it became our first year. We love photography and there are not a lot of opportunities to show our work or a lot of gallery spaces out there, so any time we have an opportunity we jump to it,” Villalba said.

Stela Reyes Lopez has worked for the past 15 years as the Media and Public information officer for Centro de Salud Familiar La Fe. She has also been friends with Villalba and both Enríquez professionally. She remembers when they approached Centro La Fe at Segundo Barrio with this idea to put a show that celebrates “La Frontera.”

“They got together with Centro La Fe and asked if they could showcase at our Galería Aztlan and we thought what a great way to every year, as long as we can do this, to start off our Chicano Heritage Month,”said Reyes Lopez.

Reyes Lopez explains that by doing this show and having it at Segundo Barrio it celebrates who and what their community is about, their colors, their vibes, their landscape, their people, their sight and their visual stills. “Is important to know nuestra historia, nuestra raza, saber de donde venimos, las raices.”

Riós, Reyes and Hernández are among the new photographers. According to Villalba, he wanted persons in the up-and-coming group to give them an opportunity to break out.

“I try to see who is doing something on Facebook and Instagram, who is out there, who is hungry as far as art goes. A lot of photographers do it for business but there are not as many photographers that do it on the art side,” Villalba said.

Jud Burgess is a graphic designer who does photography on the side. Charles Horak is an architect by profession but he is an aspiring photographer of natural dessert landscapes. “Alex Briseño, who does street photography here in El Paso, has a very distinction look; very saturated,” said Arturo Enriquez. During opening night on September 3, photographers, friends and members of the community showed up to support the show. Dolores Hamilton, a teacher originally from Chihuahua, attended to support her neighbor and friend, Hoak, describing him as an adventurous lover of photography. “The perfect angle to me is like almost being pulled into the photo and I go into what the story behind it is, that corner, at least to me. They really capture what it is to live here in this community and in this city,” Hamilton said.

Briseño, one of the invited photographers, has been doing photography for the last 11 years. Originally from Juarez. he describes photography as a serious hobby that he started after taking a class and then falling in love with it.

“Street photography is what I do, I have four pictures on the exhibition and all of them are street style. I do landscape as well but my strongest type is street, I like to capture the vibe of the streets,” Briseño said.

Briseño said that this show expresses what it is like to live on the border because it is an experience that is different from others in the country.

Segundo Barrio is one of the oldest neighborhoods here and it is basically where many immigrants get their start, Villalba said. Although Vallarie Enriquez is not of Mexican heritage, her exposure to the Chicano community comes through her husband Arturo Enriquez . For her to be Chicano means to be in very close families and very warm. Arturo Enriquez in the other hand is from Segundo Barrio so he is able to see it in a complete different way.

“One of the reason we agreed to do this at La Fe is because during the day it is a school. Kids go in and out and they are exposed to all this art and visuals so their imagination just flourishes and goes nuts,” Arturo Enriquez said.