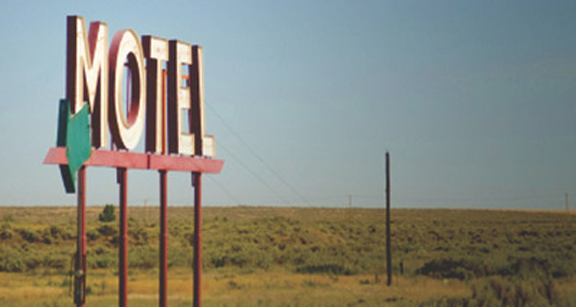 In "Life Behind the Lobby" Pawan Dhingra explores the American Dream and the experience of Indian American motel owners.

When Paklal finishes his breakfast bowl of cereal, he quickly cleans up his area, slips on his tennis shoes, picks up a broom and a jug of Clorox and rushes to join his parents to help clean some 30 rooms in a San Antonio hotel.

The 19-year-old native of Surat, India, and his parents earn three dollars for each room and doing the laundry brings in some extra money. On rare occasions if the hotel is very busy, they average about 70 rooms a day. In addition to their pay, they are allowed to live for free at the hotel, which is also owned by a native of India.

Their dream is to join him and the thousands of other Indian entrepreneurs and own their own motel.

Paklal’s (not his real name) parents moved from Surat, a rich dairy farming town, to San Antonio more than two years ago on a temporary visa. His father was a farmer and his mother stayed home to raise their children and take care of the cooking and cleaning.

Although farmers in Surat earn more than the average farmer in the U.S., the couple wanted to improve their lives by starting a business, secure a U.S. education for their son and reunite with their daughter who had married U.S. citizens and moved to Texas. They arrived in the U.S. in 2012, began cleaning hotels, and saved up money for their son to join them in San Antonio two years later.

Today, Paklal, his parents, older sister, brother-in-law, are part of the trend that is dominating the hotel industry — Indian entrepreneurship, known as the “Patel Motel Phenomenon.”

Paklal’s parents ended up overstaying their visas and are now undocumented workers paying off their lifelong debt to the hotel owner who brought them into the U.S from India.

“My parents only know a little bit of English like ‘hello, thank you and you’re welcome’,” Paklal said.

If a traveler stops at an American hotel or motel more than likely an Indian or the family of an Indian immigrant owns the place. The owner of any of the most popular American hotels today is likely to come from the state of Gujarat, India, and has become player in the U.S. hotel industry.

According to the Asian American Hotel Owners Association (AAHOA) based in Atlanta, Indians own about half of the U.S. economy lodging facilities and almost 60 percent of all hotel properties in the U.S.

“You can drive anywhere in the U.S. and I can guarantee you eight out of 10 times it’s owned by a Patel,” Arvind Singhal, communication professor at the University of Texas at El Paso said. “They usually have extensive networks of people who are in the country legally who stay at the hotel and manage the hotel.”

Indians from Gujarat started to buy into lower-end U.S. hotels in the 1960s and 1970s, when U.S. immigration laws granted residency for new arrivals that would invest about $10,000 to run a business. This ethnic group now possesses about 20,000 hotels, totaling to about one million rooms.

The first hotels obtained were in run-down areas, usually at the lowest end of the industry. They provide Indian immigrants with a place to live on the premises, so that they can be on call 24 hours a day, seven days a week, and are ready to work and keep the hotel running efficiently.

“They even have the term called “Patel motels.” They buy a hotel that has 20 rooms, they move up to 50 rooms and then purchase a 100-room motel,” Singhal said. “Residence Inns, Days Inn, Comfort Inns, and even some Holiday inns are all owned by Patels.”

But, a 2014 Pew Research Center Report, also estimates there are 450,000 Indians living in the U.S. illegally – four percent of the total number of undocumented people in the country. That makes India the fourth largest source of unauthorized immigrants in America, behind Mexico, El Salvador, and Guatemala.

“They stay in the US because they must have very very strong support here, they all want a better life, want to be with their children, and want to live a comfortable life those may be the compelling reasons for it,” Singhal said.

India is about 10,000 miles away and it’s an expensive process to come to the US.

“Its going to cost you a few thousand bucks just for air fare; you can’t swim across or have a coyote to cross you over, you have to take a flight, you have to have papers, otherwise the airlines will not allow you to board. So anybody who enters the U.S. from India would have papers at least at the time they enter,” Singhal said. In his book “Life Behind the Lobby” Oberlin Sociology Professor Pawan Dhingra explores the accomplishments and marginalizations of Indian immigrants who appear to be achieving the American Dream of success, but may also have to give up some of their culture to blend in and not have the benefits other workers may receive.

“You can be somewhat invisible in a motel. When your notion of the family is extended, then the relationships are not completely business like, and its not like ‘Hey where’s my life insurance? Where are my benefits?’ These employees don’t complain,” Signhal said.

Compared to working immigrant men overall, Indian men are more likely to work in the science and technology sector, specifically in information technology and other science and engineering occupations and in business and sales occupations. They were less likely to work in construction, extraction, and transportation, service and personal care and manufacturing, installation, and repair.

“Cleaning doesn’t surprise me because a good chunk who come from the state of Gujarat,” Signhal said. “Especially if they come from Surat they are motel owners and need a lot of people to manage the motel, and it’s far cheaper to bring your extended family and not be employed as a worker.”

This is the case for Paklal and his parents, They are the few who are typically known to have a job that any undocumented person could obtain.

“When my dad came to the U.S., his friend was already working at this motel so my dad came here to learn the business and from here he went to another motel,” Paklal said.

Paklal said his parents are waiting for their money to transfer from India to the U.S. through Western Union to buy a home. Paklal will start community college next January and to study business management. He is currently waiting on his social security card and green card.

As for Paklal’s parents, his father will soon own his own low budget motel in North Carolina.