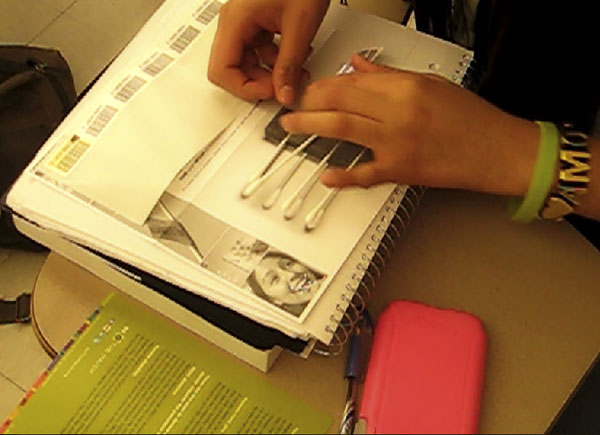 “Wait a minute, this wont hurt at all will it?” Anthony Aguilar asks while holding a registration packet for Be The Match, a project to match donors with people who need bone marrow transplants. That’s the most common question asked, says Anita Gonzales Southwest representative for Be The Match, which is operated by the National Marrow Donor Program to help match healthy bone marrow donors with patients battling illnesses like leukemia, sickle cell anemia, or other life threatening blood diseases. “It’s the most simple and painless process really,” Gonzales says. “Its a simple saliva sample. It’s a sterile medical swab, you take it and run along the inside of you’re cheek, up and down ten times, put it in the registration envelope, and just like that the process is done.” Although the common ages of donors range from 18 to 44, it’s the need for minority donors, especially Hispanic donors, that is crucial to Be The Matches mission to help out not only patients in need but also minority patients in need.

“We usually aim to gather donors who are between the ages of 18 and 44.” Says Gonzales. “However, in that age range we aim to gather the minorities. There is an increasingly low amount of minorities in our registry.” As the numbers in the registry show, 75 percent of the registered donors are Anglo compared to the remaining 25 percent being minorities consisting of Hispanics, African Americans, and Asians. “In some cases it can take eight to nine years to find an actual Hispanic minority DNA match,” says Gonzales. “… When it comes to donating and surgical procedures, the majority of minorities will only help their direct families, not the life of a complete stranger. And we really try to educate and bring awareness to these minorities because it can help save the live of another person of the same minority.” If you are interested in joining the bone marrow donor registry, here is how the process works.

There are three ways to donate bone marrow: