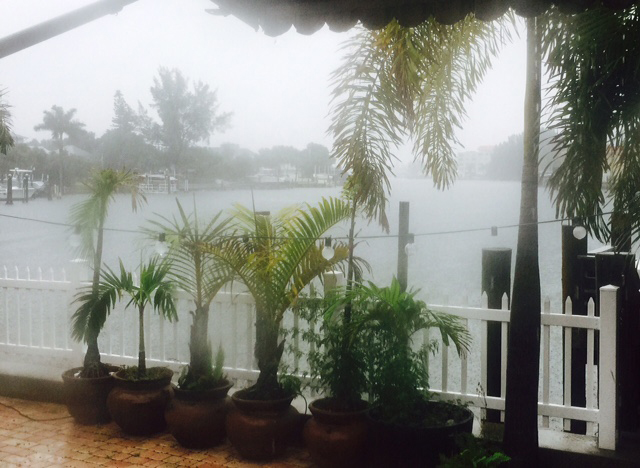 Crow-caw 1—come the deluge – Two weeks in Saint Petersburg Beach, Florida, have been marked by near constant rain, not the sin-ganas rain of the Southwest, but the turbulent cascades of tumbling airborne rain sheets I remember from my childhood in Costa Rica. My daughter claims global warming is to blame for the downpours. But I love the rain.

Crow-caw 2 — I’m calling these musings crow-caws because I find that Twitter Tweets are just too fine and tweety a vehicle to express how I felt after watching the Republican clown car belch out its payasos the other night , so I’m using this new medium, crass and raw, not subject to fine little tones and yet not too wordy.

Crow-caw 3 – The so-called debate that brought all the Republican presidential candidates to the Fox lair Thursday was terrifying but totally predictable. They repeatedly  praised their God and damned the devil and its associated demons –the federal government, Social Security, Dodd-Frank,, the Affordable  Care Act, immigration reform, abortion and by extension women and immigrants. They salivated at the thought of an extended war in the Middle East against Isis and Iran. They displayed with pride their ignorance of history and economics and piped their voices like students in speech class when they sensed a stir in the audience.

It is terrifying to contemplate the possibility that one of these individuals could land in the White House.

Crow-caw 4 – The jury in the Denver theater shooting massacre spared the life of  the creepy maniac with life in prison  instead of death. Death would have been too easy anyway — a contrast to the death sentence of the Boston marathon bomber who got his wish.

During work I did as a journalist in my youth I saw the terrible  suffering of convicts  in solitary confinement. I too would prefer death to life in prison.