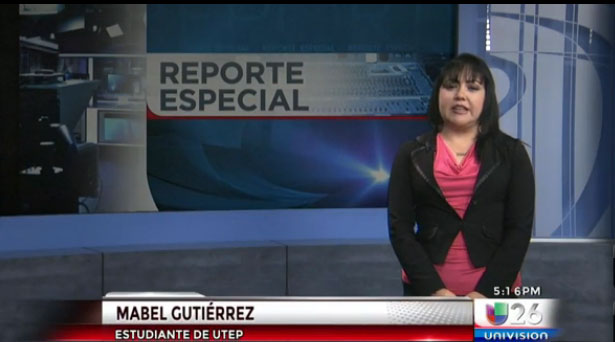 EL PASO – A special collaboration between Borderzine and Noticias Univision 26, one of the biggest media outlets in the borderland, gave the opportunity to four bilingual students majoring in multimedia journalism at UT El Paso to showcase their journalistic abilities.

Journalism students Mabel Gutierrez, Sara Villegas, Esther Jurado and Daniel Alvarez worked with Channel 26-KINT TV on a special assignment focusing on the university and student life. All four of them shot, edited and wrote their own stories which aired on the Spanish-language TV station.

The constantly shifting media landscape in the contemporary world has created a new type of journalist. Multimedia journalists, or MMJ’s, are able to produce a stories on their own that used to be done with a crew of two or more people. Video and audio editing abilities, in addition to strong writing and reporting skills are among the top qualities that potential employers look for in an ideal candidate.Borderzine, a multimedia journalism training program based at UTEP, provides the hands-on training that the next generation of journalists needs to stand out.

Here are the four special reports that aired on Channel 26-KINT TV in April, showcasing the skills students learn while writing and producing stories in the multimedia journalism program:

Esther Jurado – The future of UTEP: A Tier 1 Institution