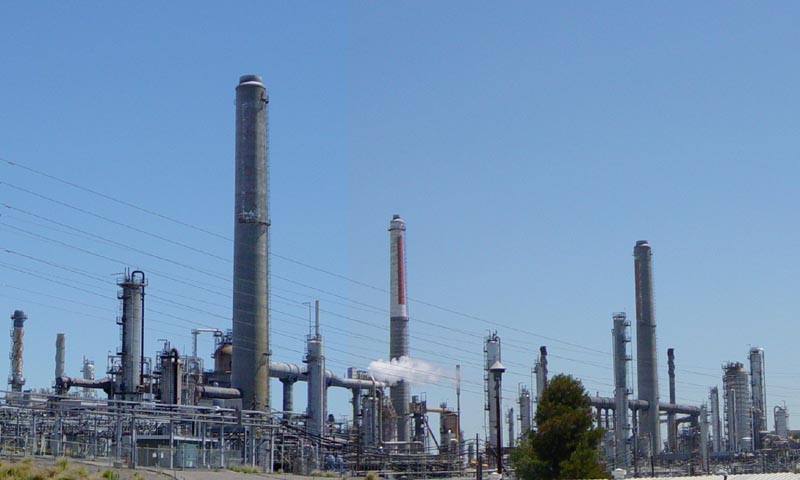 EL PASO—Gas prices have been on a roller coaster ride since the beginning of the year, but the days of filling up a car with a crisp $20 bill may be a possibility for the summer.

Gas prices started to rise again at of the end of January, reaching $2.42 in February and have since slowly decreased as the maintenance of refineries in the U.S. have finished and have gone online worldwide.

“Other cities are more geographically compact because they don’t have mountain ranges or military bases preventing them from getting to their destination. We tend to use a lot more gasoline per capita in El Paso,” said Tom Fullerton, professor of economics and finance at the University of Texas at El Paso. “So when gasoline prices go down, it helps us a lot. It also helps us in that gasoline is a regressive product.”

Fullerton said that since residents here have to drive further to get where they want to go, compared to other cities whose geography is more compact, residents are saving more money when prices go down and pay much more when prices go back up.

The current national average for gas is $2.40 per gallon and is expected to stabilize through the summer, not reaching more than $3 for the rest of the year.

Toward the end of 2014, gas prices had fallen for 123 consecutive days, plunging to $1.25 per gallon by January, according to the American Automobile Association.

Because of El Paso’s low income level, the extra dollars saved at the pump go farther and can be used for other things.

“That means less money for transportation and an increase in disposable income for other things, which is good news for the economy,” said Dr. Roberto Coronado, assistant vice president and senior economist at the Federal Reserve Bank of Dallas in El Paso, Texas.

Coronado said that the disposable income from lower gas prices drives activity for businesses and the national economy.

MarketWatch reported this week that Goldman Sachs is forecasting crude oil prices will trade remain low the remainder of 2015.

The U.S. Energy Information Administration (EIA) said that the average price for crude oil in February was $58 per gallon, compared to the $107 per gallon average for the same time last year.

“While oil and gas revenues are down, the state still has a more than healthy balance to work with. At this point, there is no discussion about cutting the budget. Rather, state leadership is pushing to cut taxes,” Sen. Jose Rodriguez, D-Texas, said. “In my view, the budget, which is our most important legislative obligation, should reflect the needs in our state.”

A substantial percentage of the job growth in Texas was accredited to the oil boom, such as Laredo, Midland, Odessa and Ft. Worth. These areas had an increase in employment because of hydraulic fracturing and horizontal drilling activities that can access natural gas and oil supplies, which previously couldn’t be accessed because the of the technology.

“People 50 years ago knew that the oil was there, they just didn’t know how to extract it. Eventually the engineering technology caught up and the supplies could be extracted,” Fullerton said. “It is an expensive way of extraction. With the prices going down so much, a lot of those producers are no longer at the break even. They’re not making enough profit to cover their expenses.”

International alliances and foes in oil

The oil market changes frequently, and the EIA said that since oil companies will be losing money with low gas prices, they will be looking to drill with other known oil companies, which could result in job losses for shale exploration—a mineral used for natural gas.

“Right now things are calm, but if a major conflict breaks out in the Middle East, it can cause production in Iraq to go offline again,” Fullerton said. “It can cause production in the countries that neighbor Saudi Arabia to go down. It could cause the shipping lanes for oil out of the Straight of Hormuz into the Arabian Sea to shut down, which affects the Iranian oil supplies.”

The Middle East is known for being a volatile region and because Saudi Arabia launched airstrikes against the Houthi rebels — overrunning much of Yemen — the oil market was disrupted, leading to oil production in the U.S. again.

The Organization of the Petroleum Exporting Countries’ decided that it would maintain market production instead of keeping the prices high, making the United States the largest producer of oil in the world.

“Saudi Arabia has decided—in terms of energy and green house gas effects—the best way to address those issues from their perspective as a major oil producer is to produce a lot of oil and make sure that the price of oil is below the break even point, for say hydraulic fracture and horizontal drilling,” Fullerton said.

Fullerton said that these Middle Eastern companies, including OPEC, are trying to make sure the hydraulic fractures and the horizontal drillers, in places like North Dakota and Texas, cannot make a profit or break even.

“Those production activities will be shut down, and people can buy their oil from Saudi Arabia and other OPEC producers,” he said. “They’ve got a documented strategy that they’re going to produce as much as it takes to make sure oil prices remain low and these fringe producers can’t operate profitably.”