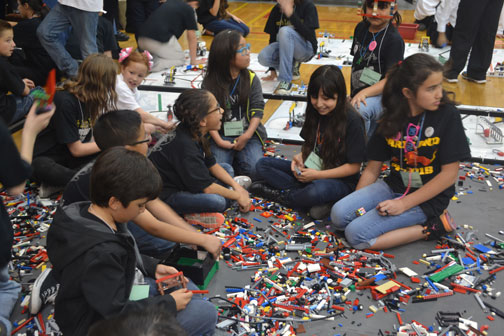 El Paso students get creative in the Lego pit at the Lego League robotics competition in the Memorial Gym at UTEP on Feb. 7, 2015. Photo by Alonso Moreno, Borderzine.com

“It was the most exciting thing that has ever happened in my life,” said Samantha Perez, a member of the Loretto Angel Bots Blue team. “At first i wasn’t expecting to win anything, but this was a nice surprise.”

More than 100 students from El Paso elementary and middle schools spent the day building with Legos and participating in dancing and cheering exercises as part of the high-energy competition in the 7th annual FIRST Lego League (FLL) and Jr. FLL Championships Feb. 7 in the Memorial Gym at the University of Texas at El Paso.

“The FIRST robotics competition is a fun way to get students interested in science, technology, engineering and math by using robotics,” said Dr. Virgilio Gonzalez, associate chair of electrical and computer engineering at UTEP. “The tournament is much more than Lego robots solving challenges, it also includes professional research and community involvement.”

One of two all-girl teams to participate in the championship, the Loretto girls represented an important step forward in getting more girls interested in engineering.

According to The National Academy of Engineering, just 20 percent of engineering bachelor’s degrees go to women. Gonzalez said that’s why these competitions are important to interest girls in careers in science, technology, engineering and math (STEM) fields when they are young.

“They usually make the decision when they are around middle school,” he said. “By then they decide on a career path, and once they are on high school it’s uncommon for them to change that path.”

Michelle Sanchez, a member of Parkland’s Girl POWER team – which stands for Preparing Outstanding Women for Engineering Roles – said that participating in the Lego challenge is more than just a competition.

“Our team is about breaking the gender binary, showing that tomboyish girls, girly girls or any type of girl can be just as capable as any man,” Sanchez said.

FIRST, which stands For Inspiration and Recognition in Science and Technology, is a national nonprofit organization whose mission is to inspire young people to be science and technology leaders, by engaging them in mentor-based programs designed to build science, engineering and technology skills and cooperative working.

“What I like about this type of program is that not only do they build a robot, but that the philosophy of the whole event is that everyone helps everyone else,” Gonzalez said.

Gonzalez notes that there are other programs that deal with robotics, but their focus is solely on building and programming them for competition. However, the makeup of an engineer shouldn’t just be the math, science or engineering skills, they need to be able to collaborate and work well with others.

Despite the emphasis on social skills, the program does challenge students to go beyond the concept of building a robot and focuses on a central theme.

“Students need to research the topic for the year, build a Lego model which represents a solution to the problem, and then they get to build a robot for competition,” Gonzalez said.

According to the FIRST website, studying science, technology, and problem-solving are proven paths to successful careers.

“What we have seen on the studies so far, is that students that get involved in these programs have a higher rate of entrance and stay in a STEM oriented field,” Gonzalez said.

“We were able to introduce a lot of girls to engineering and engineering concepts,” Jensen said. “I am really proud of them to go through it all to win this competition. It’s really exciting and I can’t put into words how proud I am of them.”