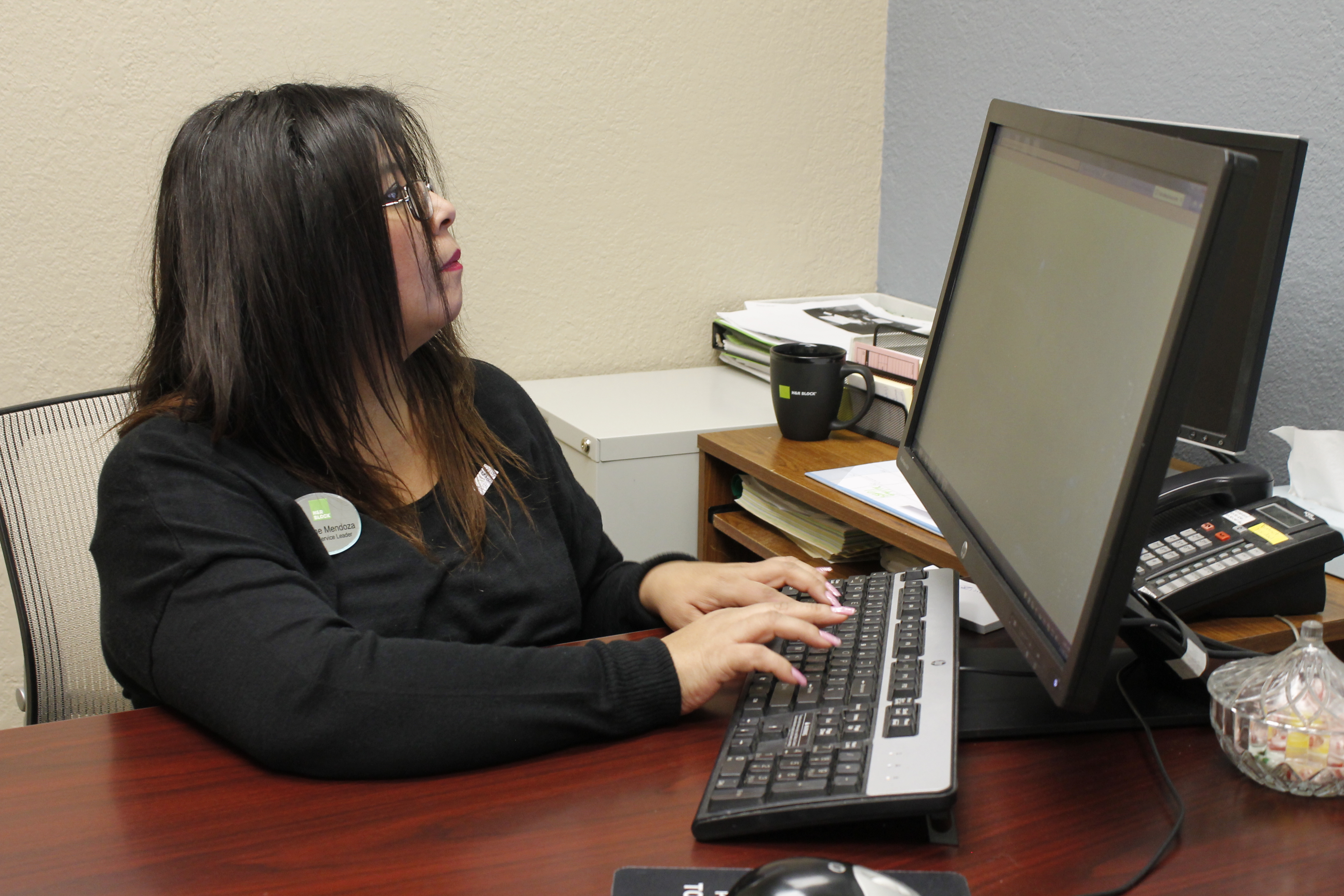 Tax advisor Yvonne Mendoza wound up with a penalty charge on her own tax return because she did not sign up for personal health insurance. Photo by Tanya Carbajal, Borderzine.com

EL PASO — Yvonne Mendoza a master tax advisor usually helps clients wind their way through the tax return maze, but this year she came up with a nasty fine in her own return – a penalty charge because she did not sign up for personal health insurance.

“With my refund being affected, it didn’t allow me to pay the things I needed to pay in January,” said Mendoza, a17-year veteran tax expert at H & R Block. The penalty cost her more than $400, one percent of her household income.

This year’s tax return bill can cost more than expected because the Affordable Care Act (ACA), or Obamacare imposes a penalty on Americans who failed to get health insurance.

Mendoza said that she made the mistake of not going to the marketplace.

“By letting it go and not even looking into it, I hurt myself due to the fact that I wound up with a penalty and I didn’t qualify for any of the exemptions,” Mendoza said.

Mendoza is on a tight budget, just like many people in America. She said that people expect a certain amount of money from their refund.

“Most people already have their refund spent before they even come file their taxes.”

Many Americans who expected to pay a $95 penalty are in for a rude awakening – the penalty is $95 or 1 percent of household income, whichever is greater. Next year the penalty will be $325 or 2 percent.

The new law means that tax preparers have more paperwork to add to the federal tax returns, but persons with coverage through work or through Medicare or Medicaid only have to check the box that says they had coverage all year on Form 1040.

Seven million Americans including an estimated 734,000 Texans who purchased healthcare coverage in the federal marketplace can be affected if they failed to calculate their 2014 income correctly.

Americans with an income of $11,490 to $45,960 could qualify for a premium tax credit, and persons who incorrectly cited more income will receive a rebate for part of the cost of the insurance. People who calculated too low, on the other hand, will have to pay the entire premium reimbursement back to the Internal Revenue Service.

Only 61 percent of the respondents to a survey by the H & R Block Tax Institute were confident that they calculated their income correctly in order to qualify for subsidies.

Hispanics and lower income respondents knew less about the law and the penalties that they could face than white Americans. Only 31 percent of respondents knew that if they took a tax credit it could impact their tax refund and 66 percent did not know how the ACA could affect their returns.

Some exceptions on the 2014 income tax return could help taxpayers avoid the penalty. Some may qualify for an exemption if the lowest coverage costs more than eight percent of their household income, if their income low enough so they don’t have to file a tax return, or if they belong to a federally recognized tribe (Indian or Alaskan Native).

An H & R Block chart cites various scenarios that could impact a family that failed to sign up for health insurance. One example, taken from the chart, is Kevin and Angie who have a combined income of $30,000. Kevin, Angie, and their one child do not have health insurance, making their potential tax penalty for 2014 $238 and it goes on to show their 2015 ($813) and 2016 ($1,738) tax penalties if they don’t get coverage.

The deadline to enroll for health insurance was Feb. 15. The deadline for 2014 income tax returns is April 15 so many Americans may have to pay the penalty for 2014 and quite possibly 2015.

Project Amistad, a not for profit agency, is helping the El Paso community sign up for health insurance through the marketplace.

Roy Ortega Community Relations Manager at Project Amistad said that the agency provides information for any member of the community that seeks help. Ortega said that 80 percent to 90 percent of the people who applied at Project Amistad have qualified for a subsidy. Close to 35,000 El Pasoans enrolled for health insurance in the 2015 enrollment period according to the Department of Health and Human Services.

“Under provisions of the Affordable Care Act the government has made it possible for everyone to be able to afford a health plan,” said Ortega. When many people don’t have health insurance, the cost of providing it drives up, he said.

Under the new law, the El Paso community managed to enroll about 35,000 residents who previously had no health insurance and are now able to afford it. As more residents get insured, the burden of indigent health care at University Medical Center and other public facilities is lessened, Ortega said. However, 178,000 residents still have no health insurance according to University Medical Center.

Project Amistad’s goal is to enroll as many people as possible to protect those that get sick or are in a car accident. This will lessen the burden placed on local taxpayers through the taxes that are imposed through the county hospital.

Fernando Dominguez an Insurance Agent with Center for Medicaid and Medicare Services (CMS) said that he was flooded with people in the El Paso community trying to beat the deadline to get insured.

The marketplace has helped a lot of families by giving them subsidies according to their income leaving most with monthly payments of just $40-$50, said Dominguez.

“Health is not always assured because anything can change in a month and by protecting our health we protect the economy,” Dominguez said.

Dominguez said that being near the borderland, going to Juarez will always be an option because care can be cheaper. The problem is in case of an emergency, such as a hearth attack or asthma attack, urgent care is needed, which takes the option of going to Juarez away. This will create huge medical bills for the family.

“In the long run the fine will be more costly than insurance so people will eventually get health care,” he said.