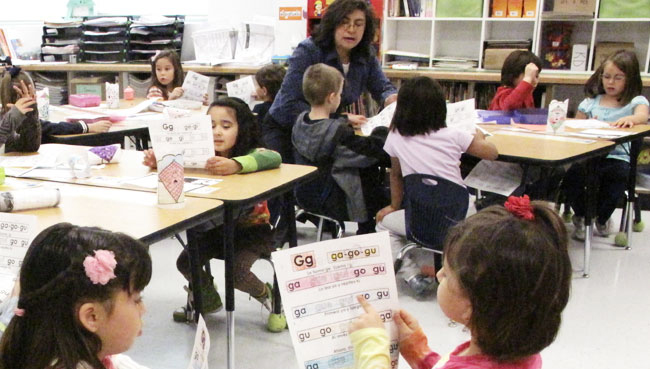 EL PASO — Martha Briseño and Bella, her five-year-old daughter, sit only a few inches apart from each other, but a set of words, letters and sounds hover like a wall between them.

“Look what I can do mommy,” Bella said.

Briseño responds to her in Spanish.

Somehow, despite the differences, two languages clash and unite simultaneously.

Her desire that her child be fluent in two languages led her to enroll Bella in Mesita Elementary School, which has offered a dual language program for the last 15 years. Students are instructed half of the day in English and half the day in Spanish.

Mesita was also one of the few schools in the El Paso Independent School district that extended the dual language option to students who only speak English.

“Yo se que en la escuela le van a poder dar el español y yo le voy a poder hablar con los dos lenguajes. (I know that in school they’ll teach her Spanish, and I’ll be able to speak to her in both languages),” Briseño said.

“The goal of a dual language student is to be fluent and proficient in both languages,” said Maria Sianez, a fourth grade teacher at Mesita Elementary. “In this environment the kids feel comfortable, feel proud, and are encouraged to use both languages.”

A recent decision by EPISD to expand the dual language program means that it will be implemented across the entire district.

“When I arrived, we had a lot of community input and desire for it,” said Juan Cabrera, who was named superintendent of EPISD Sept. 3, 2013. “The board accepted to implement it to just go from a handful of campuses to 56 and then from one middle school to nine.”

According to EPISD enrollment figures for 2013-2014, there are 10,048 bilingual education students in the district and 3,655 English as a Second Language students.

The move was made after the Board of Managers for the district appointed a task force to study the state of bilingual education in the district due to low standardized test scores for English Language Learners, students whose first language is Spanish.

The task force appointed Elena Izquierdo, associate professor of teacher education at the University of Texas at El Paso, as chair of the task force.

“The research says that it (dual language) is the most effective model for English learners to succeed academically because half of their instruction is in Spanish,” said Izquierdo. “They can continue their academic and cognitive development in a language they can work with.”

Education researchers Virginia Collier and Wayne Thomas of George Mason University have done 20 years of bilingual program evaluation research in almost two dozen school districts in 15 states. According to the researchers, who published their findings in 2012, dual language is the only program that fully closes the achievement gap.

A study by De Paul University profiled Inter-American Elementary School, which implemented a dual language program, and Roosevelt High School, a nearby high school with a majority of students that did not participate in dual language. Both had similar demographics.

Reading and math scores for both schools revealed that assessments were highuer for the students of Inter-American.

“Instructional practices that invite students to participate by building on what they know and what they bring from their home and communities, that’s one of the basic tenets of how you help kids learn,” said Robert Linquanti, senior researcher at WestEd, an educational research and development service agency. “You build on their prior knowledge.”

Aside from dual language, other bilingual teaching systems schools use are transitional and ESL programs.

In a transitional program, children are instructed using their native language with about 35-40 minutes of English used. At the end of third grade, students begin transitioning into English language for the majority of the day, eventually leading into full immersion.

While, in this ESL “pull-out” system students are taken out of their classroom and placed with an English teacher for oral development in a 30-40 minute block.

“ESL doesn’t use any Spanish, and transitional uses a little bit of Spanish,” said Izquierdo. “Dual language says we value your language. Not only is it a right but it’s an advantage, its enrichment, it’s a resource.” All the districts, except for Socorro ISD, have some form of dual language program.

“I just feel that we need to expose our students, especially our students who are trying to learn the English language to more English,” said Jose Espinoza, superintendent of Socorro ISD. “We’re not going to provide that additional English for children at school then they’re not going to get it at home, so I think we’re just doing a disservice.”

The superintendent for YISD said the district is reviewing its dual language program.

“The problem is inconsistency throughout the district and so one of the things we’re doing is we’re reviewing the programs and how they’re being implemented and executed in each of the 27 or 28 schools that currently have a dual language program, said Xavier De La Torre, superintendent for YISD. “The 50/50 program is for the most part, very effective in my opinion.”

Despite the popularity of dual language among educators, other research suggests that it is not the bilingual program that matters, but the quality of the program.

Students were tested at the beginning an end of every year. The study found students in both programs gained substantially in English receptive language skills over the years, suggesting that what matters is the quality of the instruction, not the language.

“At the end of five years what resulted is that all of them, were pretty much on an equal par,” said Calderon. “At the end of these five years we discovered that it’s the quality of the instruction, it’s not whether it’s dual language or two way or bilingual but rather are the teachers really teaching language and literacy and content really well.”

Calderon said when implementing a program, what is important for any programs success is that it must be structured. In order for this to happen adequate professional development is required.

“What’s happening in many of the school districts here in El Paso is that they don’t coach the teachers, don’t give them feedback, let them do what they want to do, and they don’t have structured programs,” said Calderon.

Calderon has her own program called ExC-ELL (Expediting Comprehension for English Language Learners), which instructs institutions on how to implement a bilingual program and is currently being implemented across three states.

Her program focuses on quality instruction based on a 3 features, model, policy and feedback.

“The teachers were trained very well…for several days,” said Calderon. “Once they started implementing these strategies for English and language development, then expert trainers like myself and my team would go observe the teachers in the classroom and give them feedback.”

According to Izquierdo, teachers in EPISD are still being trained.

“It is a lot of work and I do believe there are not enough trainings, there’s not enough resources, you end up having to create a lot on your own,” said Sainez.

Izquierdo said one of the problems being faced by the district is professional development and lack of resources.

According to EPISD’s 2013 financial and compliance report at the end of June, the debt was $32.8 million despite revenues of $591.4 million.

“The school districts get the money, whether they spend it the way they’re supposed to spend it… that’s a huge question, sometimes they don’t,” said Calderon. “It’s not a matter of funding, it never is.”