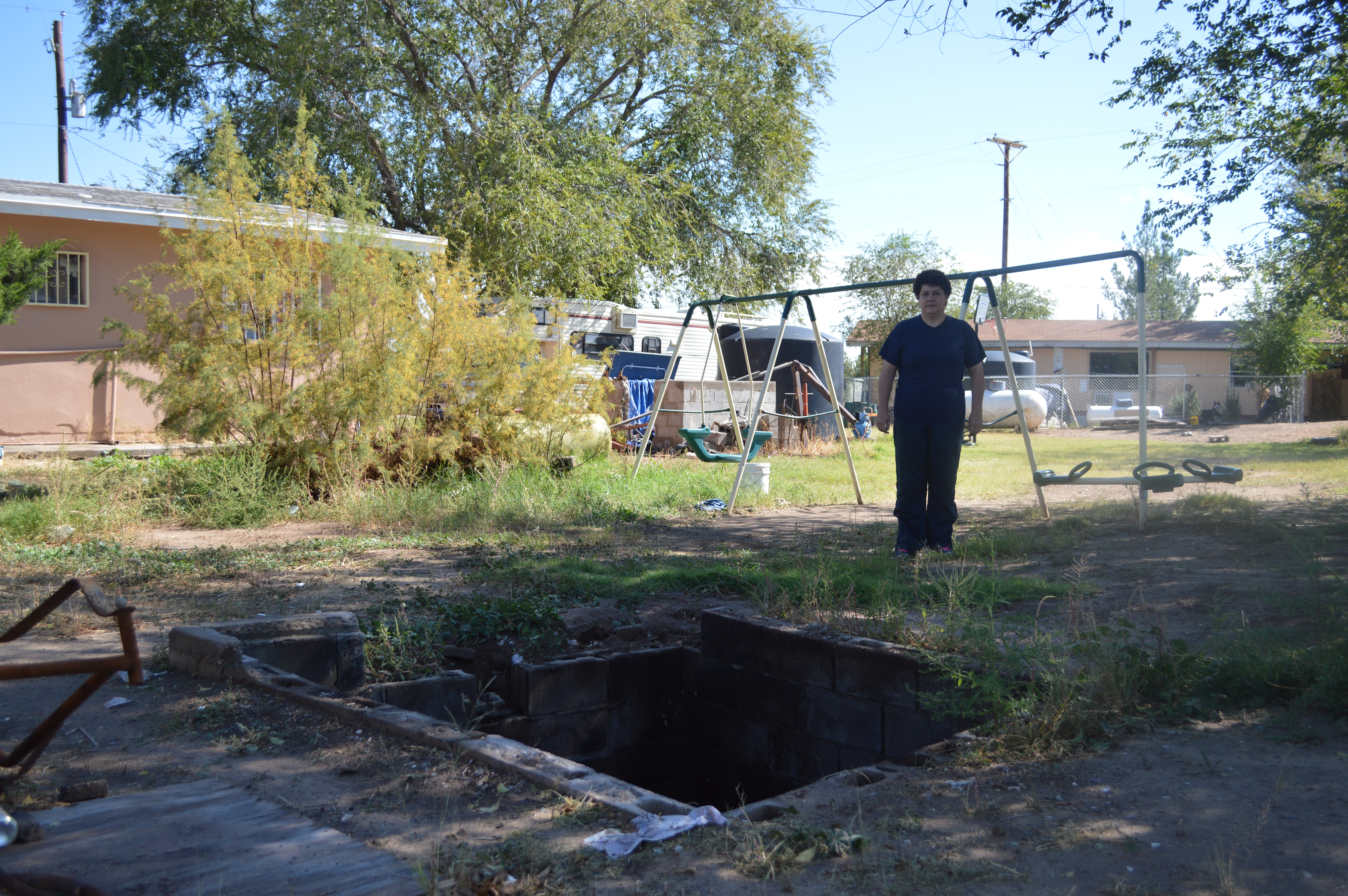 Elvira Mendoza next to the hole the kids fall in.

EL PASO – Two years after getting help to improve the quality of water storage and waste management, Cuadrilla – a small, unincorporated community on the far eastern edge of the Lower Valley – still struggles with infrastructure problems that residents say they can’t afford to maintain.

This colonia is made up of a couple hundred people that, before the septic and water tanks were installed, used to get their water from a nearby canal. But the water in the canal has high levels of salt, which damages containers and is too polluted for safe consumption, residents said. Up until recent years the Cuadrilla residents did not have any source of clean water, until a local nonprofit organization called AYUDA provided them with septic and water tanks.

Before the organization helped them install the septic tanks for their homes properly, the residents of the Cuadrilla community used improvised septic tanks and outhouses that most of the time were left uncovered and were unsafe. Elvira Mendoza next to the hole the kids fall in.

Although Cuadrilla residents now have proper septic tanks, they are faced with a new problem. They do not have the financial means to take proper care of the new septic tanks and their decade-long campaign to get the county to install running water in the community has come to a halt.

The Cuadrilla community is the city of San Elizario, in Far East El Paso. However, the residents say that they see themselves as an independent community because the San Elizario does not help with their water and septic needs or unpaved roads.

“None of the nearby districts want to take us in as part of them because of the problems that Cuadrilla faces,” said homemaker Elvira Mendoza, 42, referring to ongoing problems with roads, water, sewage and housing issues. Mendoza was born in Cuadrilla and has lived there her entire life.

Some of the residents believe a solution to their needs is to be annexed by one of the nearby cities, like Fabens or Clint.

Olivia Figueroa, the AYUDA executive director, said that, before the septic tanks were installed, sanitary conditions “led to a lot of illnesses in the community because people were exposed to the bacteria not only from the “bathroom” waste but also because the canal water that they used to use was full of bacteria as well.”

Carmen Jurado, a 58-year-old homemaker who grew up in Cuadrilla, agreed that conditions were bad.

“Before the septic tank we would just do our business in a nearby “bathroom” that would be drained in an unoccupied piece of land,” she said.

Today, the Cuadrilla residents receive their water supply from the Lower Valley Water District that sends trucks to fill their water tanks with potable water and another truck to drain their septic tanks.

The water service is not free and has to be done twice a month. To pay for this service the residents of the Cuadrilla community pitch in to raise enough so that they can pay the company when the trucks arrive. The residents are charged $150 once a year to have their septic tanks drained and $60 each time they get their water tanks filled.

The Cuadrilla community also faces other costly infrastructure problems such as unpaved roads that become unusable during the rainy season. There are no schools in the colonia. Children from the community attend school in Clint, Fabens or San Elizario. Families live in humble, often poorly constructed homes and aging trailers, According to ruralhome.org, the average yearly income for a colonia household in Texas is $6,784.

Lacking in resources for maintenance and repairs, residents often apply to local organizations like AYUDA to see if they are eligible to receive state and federal grants to fix their houses. Often, however, the properties don’t qualify for government help because they were built without permits.

“I know that the installation of septic and water tanks isn’t much because of all the issues this community faces, but at least it makes their living conditions a little better,” Figueroa said. “We’ll continue to help them as much as we can to improve their lives.”