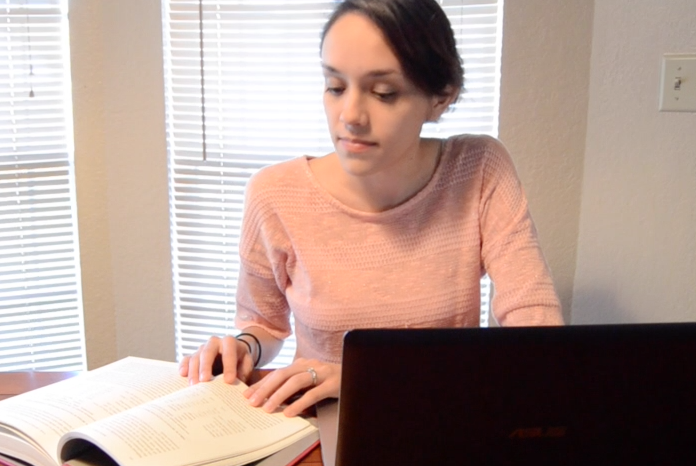 EL PASO – When Candace Olivas gets home after work she drops her bag full of nursing textbooks and right away turns on the TV, flips through the channels, and turns up the volume as news about the Dow Jones Industrial Average, NASDAQ and S&P; 500 blasts through her apartment.

Numbers from the day’s stock market trading session shine from the screen onto her intense eyes. Olivas, 22, is not a stockbroker, but a young American stock market investor.

“I always felt that only way to gain wealth in today’s world is either starting your own business and making it big or investing in the stock market,” Olivas said. Olivas, who recently graduated with honors from the University of Texas at El Paso nursing program, is one of the few young Americans investing in the stock market. According to a recent survey by Bankrate.com, an aggregator of financial rate data and financial content, U.S. millennials prefer conservative bank investments, like a savings account, rather than risky stock market investments.

The survey found that Americans between the ages of 18 and 29 had the largest percentage of conservative investors who chose cash as their preferred long-term investment.

Traditionally, older Americans close to retirement prefer safer investments because they don’t want to risk losing the money they have accumulated for retirement. Now risk-averse young Americans also prefer these types of investments and the consequences are significant.

“With interest rates at all-time lows, the biggest consequence is that the investment returns on savings accounts and money markets, where young people have the predominance of their investments, won’t keep up with inflation and won’t grow,” said Steve Yellen, senior vice president for Morgan Stanley Wealth Management in El Paso.

With pension plans becoming extinct, young Americans today will have a greater financial burden after retirement, and many will not be ready to face that problem.

“Young people won’t have the wealth that their parents’ generation has for the first time in history,” said Yellen.

Young Americans are not alone in their aversion to the stock market. According to Gallup, the percentage of Americans that hold individual stocks, mutual funds, or stocks in their 401(k) or IRA fell to 54 percent this year. That is the lowest percentage since Gallup started monitoring American involvement in the stock market in 1999 and is happening during one of the strongest bull markets in U.S. history.

“The small investor lost its trust on Wall Street and the fear of owning stocks has overcome the desire of making money,” Yellen said.

“They read of Bernie Madoff’s cheating, Martha Stewart’s trading on inside information,” Yellen said. “They read of the current Wall Street firms inventing new investment products like Credit Default Swaps, which make them more commissions and get Wall Street more profits but lead to greater misunderstanding and non-transparency in the eyes of the young people.”

The stock markets hit new record highs almost every day, yet the percentage of Americans investing continues to go down.

Lack of trust was also a concern for Olivas when deciding to invest in stocks last year.

“I was a little distrustful when I began to get into stocks. It was scary because I didn’t know if I could trust a broker with my money.”

Education is also a big factor in the low number of young American investors today.

There are currently programs like the Stock Market Game, that are being used in some schools around the country. However, these programs are not enough. Yellen says that young people must be willing to learn on their own in order to be successful.

“Young people must learn that financial literacy is extremely important. They must have the passion to learn more and more,” Yellen said.

Roger Bernal, 21, a full time business student at UTEP who works part time at a local nightclub, said he lacks time and money for investing. He says his understanding of investing in the stock market is limited to occasionally watching cable business news.

“I don’t really know a lot about the stock market and I don’t really have the time to study or the money to invest,” said Bernal.

Olivas, who is single and is currently preparing for a nursing certification exam, confessed that it can take her up to two or three hours a day to analyze a day’s trading session and determine which companies might be good future investments.

“It takes hard work but I’m willing to take time out of my day and money out of my pocket that I don’t have because investing is really important for my future,” said Olivas.