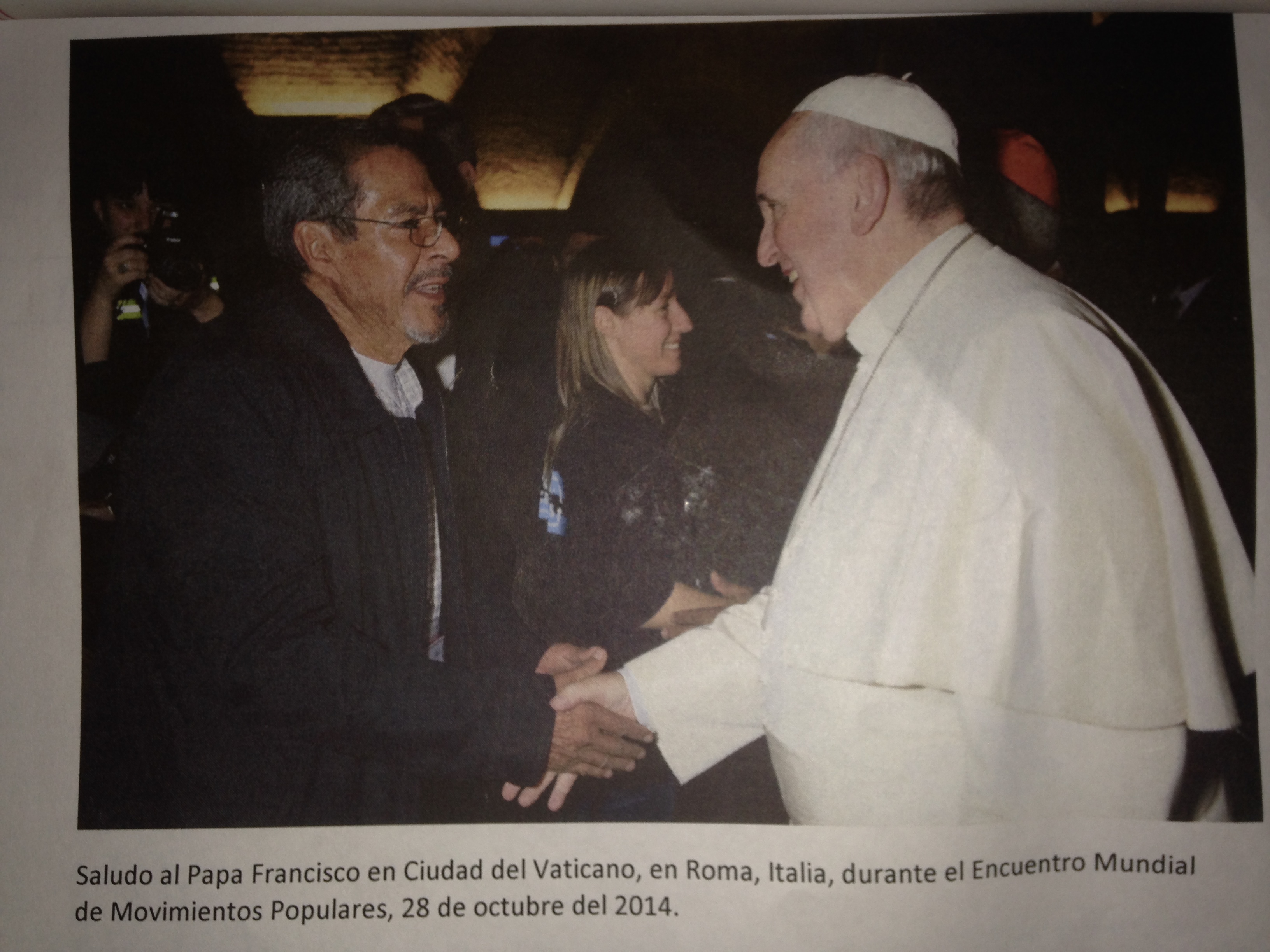 This is a photo of Carlos Marentes meeting the Pope on October 28, 2014. Photo credit: Jeraldine Ramos

EL PASO – When Carlos Marentes decided to help migrant farm workers who slept on cold sidewalks in Downtown El Paso he never imagined it would one day lead him to meeting the Pope. This is a photo of Carlos Marentes meeting the Pope on October 28, 2014. Photo credit: Jeraldine Ramos

Marentes, who opened El Centro de los Trabajadores Agrículturas Fronterizos (The Border Farmworkers Center) in 1995, was one of three people selected from the U.S. to take part in the World Meeting of Popular Movements conference at the Vatican in late October. The conference was an open discussion about poverty, unemployment, loss of homes and land that affect people around the world.

Marentes was surprised to receive an invitation to the conference.

“I was meeting the pope,” Marentes said. “Here I seek an appointment with the city council members and they don’t even want to see me, they’re to busy to see me.”

He also said it was Pope Francis’s idea to invite people who work directly with poverty to attend the conference. Marentes was invited because he has been working for more than 30 years with low-income workers who don’t have a lot of resources to improve their quality of life.

The 8,000 square-foot farmworkers shelter, located at the corner of Ninth Ave. and Oregon St. in Downtown El Paso center, aims to help migrant workers with basic daily needs like food, shelter and a place to store their belongings when they are working. Before it was built, migrant and seasonal farmworkers often spent hours on the streets in Downtown El Paso while they waited to be picked up for work in the fields. Verenice De La Mora 30, a farmworker and volunteer at the shelter washes her hands before helping cook meals for the other farmworkers. Photo credit: Jeraldine Ramos

Verenice De La Mora, 30, a farmworker and volunteer for the shelter said that people that didn’t have family in El Paso had few options for comfort and safety.

“Where would we go if we didn’t have this shelter? … Other shelters ask for to many requirements, here we just have to be farmworkers,” Mora said.

Marentes also helps educate the workers on their rights.

“They don’t know labor laws and regulations also apply to farmworkers,” said Marentes, explaining that the center is also a place for farmworkers to gather and speak about issues that concern them. Survey they gave to the farm workers to before Carlso Marentes met with Pope Francis. Photo credit: Jeraldine Ramos

Before meeting with Pope Francis, Marentes gave the people in his shelter a survey that had the following questions:

He asked the farmworkers to fill out the survey in order for him to be the “voice” of the people at his shelter.

He collected 80 of these surveys and was amazed by their generosity even though the workers didn’t have much of their own. Instead of asking for things that would benefit themselves they asked for the health of everyone. They also praised Pope Francis with messages like, “God bless you Pope” and “Thank you for all that you do.”

Marentes said that since the workers didn’t ask anything he didn’t ask Pope Francis any questions, but passed along the greetings from the farmworkers and the border community of El Paso.

“Suddenly, I was in front of the Pope and many, many things came to my mind,” said Marentes, who is a Catholic. “I felt an electrical current going through all over my body.”

Even though the farmworkers didn’t have any requests, Marentes made it a point to talk at the conference about ways the world can better the lives of those less fortunate.

“The people that I work with know that they are poor, but they don’t want things to be given to them, they want to do things that will better their lives,” he said. The Border Farmworkers Center not only provides shelter and food, but also offers resources to enrich the workers’ lives such as English classes and other support.

“We know that there are only certain things we can do, that actually organizations alone cannot make changes. It has to be an effort by society, so we will do our part and educate those that are willing to listen,” Marentes said.

He said he needs the community’s help in order to keep the shelter up and running. He hopes that people will come to his center and learn about the farmworkers and maybe contribute to the shelter in any way they can, whether it be donating their time or donating items such as clothing.

Marentes, quoting a saying from Mexico, said the shelter “will continue to add our grain of sand to improve the community.” But he hopes more of us give some thought to that man, woman, or child who picked the food we eat.