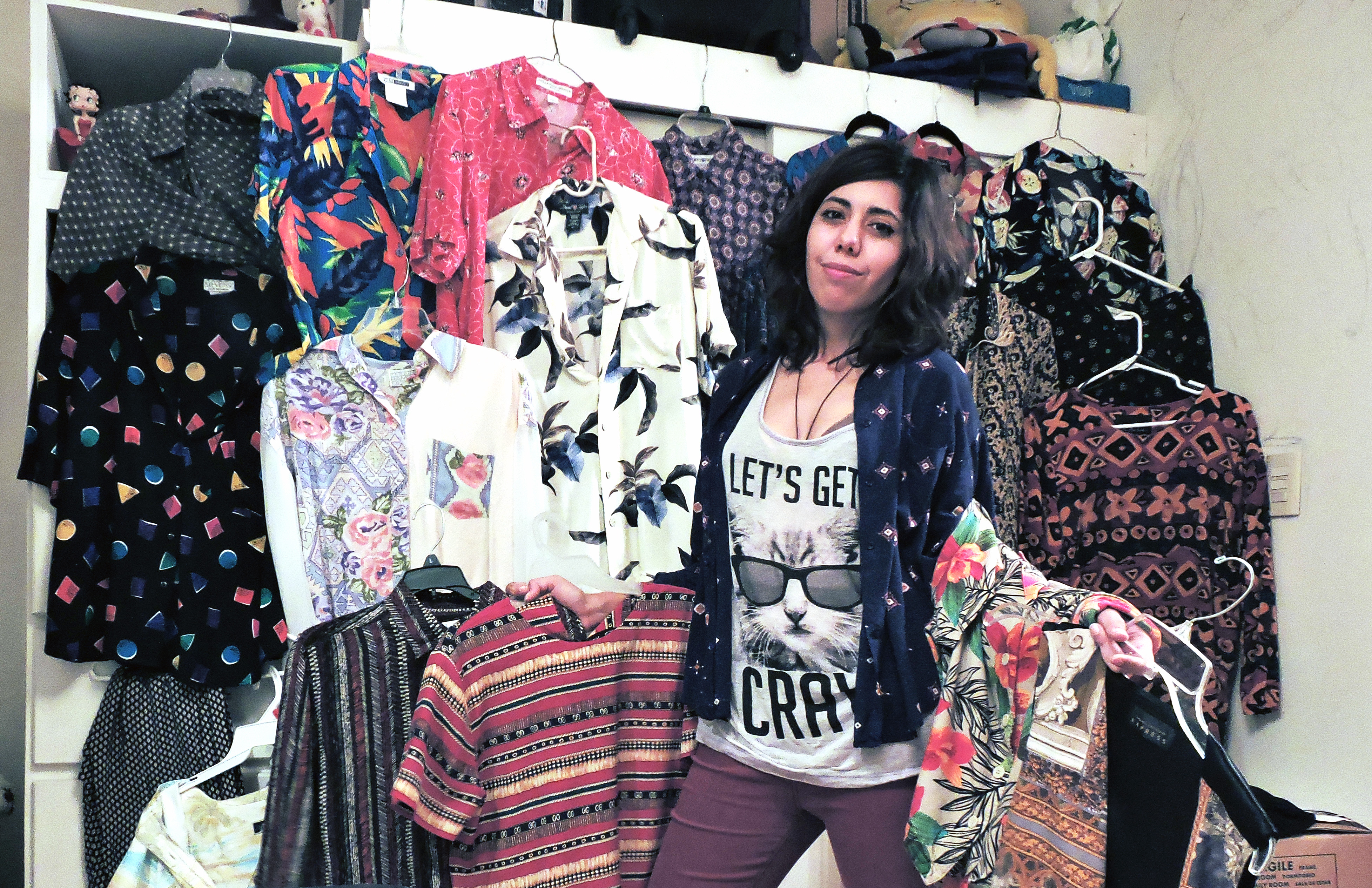 EL PASO – Savvy shoppers who hunt through thrift stores and vintage shops to create one-of-a-kind outfits may not even realize they are helping to improve the planet, too.

“My family used to shop in those stores because it was cheaper and because the clothing isn’t at all bad,” said avid shopper Cinthia Prado “To us it was a normal and smart habit because of how much you could save.” Cinthia Prado, an avid thrift store shopper, shows off some of her favorite vintage finds. Photos by Fredesvinda Rojas, Borderzine.com

For Prado, 21, the search was about finding great deals on designer fashions.

While consumers like Prado are looking for style and savings in used clothing stores, they don’t usually think about the Earth-friendly benefits of their shopping habits.

“It wasn’t on my mind that buying used clothing is something positive in an environmental way.” Prado said. But it can be.

According to the Environmental Protection Agency (EPA), the average person in the United States throws out 70 pounds of clothing a year. And, while the textile recycling industry recycles almost 3.8 billion pounds of post-consumer textile waste each year, 85 percent still ends up overflowing our landfills.

Even as our discards pile up, the U.S. continues to sell mountain of material each year. The EPA reports 14.3 million tons of textiles, items made from cloth or artificial fabric, were generated in 2012. Used, but not yet useless

John Paben, a partner at Mid-West Textiles Co. said companies like his are working to keep textiles out of the landfills, but have a ways to go.

“Europe is further ahead than we are in the United States,” Paben said,

The textile recycling industry supports initiatives for educating the public to not discard their clothes and accessories, but to get them into the recycle stream, he said.

“Our whole industry now is based on trying to make the public aware that there are alternate uses for those textiles.”

Mid-West Textiles, based in El Paso, is one of largest recyclers of textiles in the United States. The company works closely with organizations such as Goodwill and Salvation Army in order to buy the clothes that are not sold at those stores.

Once collected, textiles are separated into three grades:

The pieces of clothing that are no longer suitable for stores, are transformed into reclaimed fibers that are used to create items such as wiping cloths and carpet padding for car seats. Retail stores from all over the world that sell vintage clothing are supplied with the wearable clothing. “You can go to the mall buy an imitation item from 80s, 90s and risk wearing the same item with others,” she said. “… And quality of fabric won’t last more than a few months, compared to vintage threads that will last and look like new even after 30 years.”

Prado agreed that when it comes to retro styles buying an original is better.

“If you go shopping at a vintage store you could find the real thing.”

As more people realize how environmentally friendly it is to shop at vintage or thrift stores, they feel more encouraged to support the cause, Paben explained.

“I think the real driver is that once people get their mind around that is friendly to the environment, they feel like they are making a contribution,” he said.

Finding out that her bargain hunting helps to save the planet pleases Prado.

“I think that every time I go to Goodwill, or other thrift stores or vintage stores I would remember how I’m helping a good cause,” Prado said. “I will remember why is so great to shop at used clothing stores.”