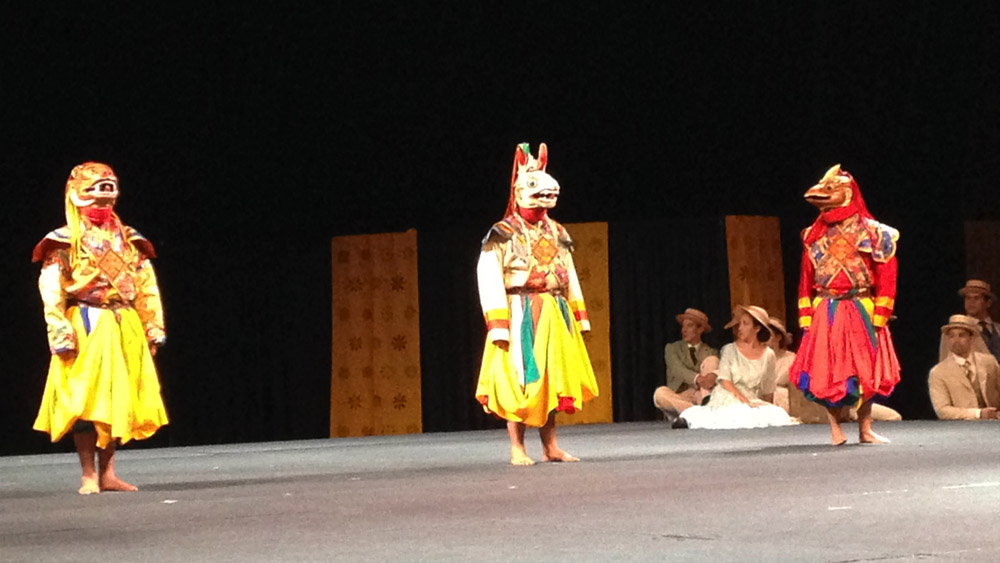 In 2013, Handel’s Acis and Galatea was the first opera to be performed in Bhutan. This year it came to El Paso.

EL PASO –The German composer G.F. Handel took his genius to London in the 18th century and in the 21st century the University of Texas at El Paso transported him to Bhutan.

Famous for its century-old campus of Bhutanese architecture, UTEP has always been a beacon of diversity in the Chihuahuan desert, so no eyebrows were raised when the melodies of Handel’s Acis and Galatea were performed before dancers in skull masks.

Tshering Goen, a musician from Bhutan and one of the program coordinators, described the opera as incorporating elements that both cultures can relate to.

“From the story we can learn the nature in death, the love, and we can see the eccentricity of transformation of one’s life,” he said.

Goen also danced in the opera, bringing Bhutanese music and culture into the performance. In 2013, Handel’s Acis and Galatea was the first opera to be performed in Bhutan. This year it came to El Paso.

The opera is the story of Galatea, a lady coming of age who discovers the meaning of love when she falls for Acis while visiting Bhutan. Acis dies in the end, but while mourning Galatea discovers the true beauty of the Bhutanese culture as the dancers comfort her.

Goen explained how much of the attire that the Bhutanese performers wore had symbolic meaning. The skull masks worn during the performance played an important part in the opera.

Opera Bhutan’s production of Handel’s Acis and Galatea made its first appearance in Thimphu, Bhutan on October 12, 2013 in honor of UTEP’s long-lasting relationship with the Kingdom of Bhutan.

That year the performers and UTEP faculty lived a three- week adventure in the Himalayan mountaintops of Bhutan as they prepare for the performance alongside Bhutanese dancers and vocalists from the Royal Academy of Performing Arts in Bhutan.

A year later they came together again to show how two different cultures can share expressions of art and emotion. “The main concept was conceived
back in 2008 during the Smithsonian Folklife Festival and from there the idea developed to integrate song and music into western opera.”

Felicia Henderson, 20, in her third year as a student violist for UTEP had the opportunity to travel to Bhutan in 2013 and immersed herself in their culture.

“They’re very friendly, very inviting, very warm and they are all about tradition,” she said.

Nicole Shindo, 27, a UTEP student who attended the event described it as, “upbeat, very colorful, at times very mellow, smooth and relaxing,” she said. With the colorful attire worn by the Bhutanese performers, the comical scenes could be felt through the music and songs. “It was great; the music was awesome,” said Shindo.

Henderson also felt the excitement from the crowed.“ It was an amazing experience. I’ve never performed in front of such a huge crowed and/or venue, so it was a very, very amazing,” she said.

Multimedia journalism major at the University of Texas at El Paso.