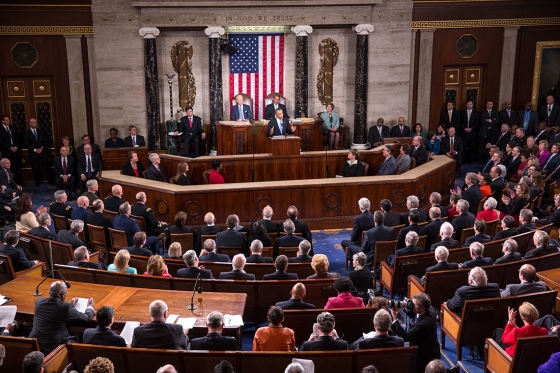 President Barack Obama delivers the State of the Union address in the House Chamber at the U.S. Capitol in Washington, D.C., Jan. 28, 2014. (Official White House Photo by Amanda Lucidon)

EL PASO — I wanted to cry after hearing Obama’s speech the other night. Two persons symbolized the state of the union for me — Sergeant First Class Cory Remsburg and his commander in chief Barack Obama. President Barack Obama delivers the State of the Union address in the House Chamber at the U.S. Capitol in Washington, D.C., Jan. 28, 2014. (Official White House Photo by Amanda Lucidon)

A massive road bomb in Afghanistan blasted shrapnel into Remsburg’s brain leaving him partly blind and paralyzed and in a coma for months. He struggled to stand and salute his commander at the joint session of Congress as Obama praised his courage and endurance. “Sergeant First Class Cory Remsburg never gives up, and he does not quit,” Obama said.

The talking heads on every cable channel singled out that moment as the emotional highlight of the evening. And it was. I felt a tightness in my throat looking at the soldier who must have felt more vulnerable before that crowd than he did on the battlefield.  And at the same moment that I mourned his suffering I couldn’t help seeing him also as a symbol for the nearly 60,000 dead and wounded Americans since 2001 in the so called War on Terror in Iraq and Afghanistan.

Historians will surely measure what the U.S. accomplished in this war, the longest lasting in U.S. history now coming to an end under Obama, and I fear that the main result they will see will be 60,000 dead and wounded Cory Remsburgs.  They proved our mettle and little else.

After praising the terribly wounded soldier, the president must have been thinking as his gaze panned over the bleak landscape of faces sitting before him in the House of Representatives chamber of the United States Capitol, “Obama never gives up, and he does not quit.”

In the American electoral process, which was designed to insure broad political representation and separation of power in a new country sick of English imperial authority, the elected president does not necessarily carry the legislature with him and the upcoming mid-term elections don’t look encouraging for Democrats.  The Congress is likely to remain divided since Republicans are expected to retain a majority in the House and may trim the Democratic majority in the Senate or take over that chamber outright.

After the speech, the Republican talking heads emphasized the negative and the Demos looked at the positive, already measuring Obama’s legacy either for a coffin or a library, as if he were a hog-tied lame duck president. In the end, the do-nothing Congress remains divided with power possibly shifting to the right, keeping the president looking like a wounded warrior in a pointless war.