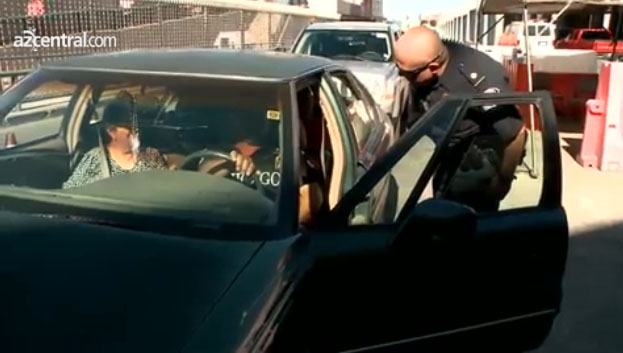 Border Patrol agents routinely violate the constitutional rights of local residents in southern Arizona when they stop drivers at interior checkpoints on major highways and state routes near the border, according to an official complaint filed Wednesday. The complaint sent to Homeland Security’s Office for Civil Rights and Civil Liberties alleges that checkpoint agents conduct searches and detain people without justification, and use immigration enforcement as a pretext for “fishing expeditions” for potential criminal activity.

The American Civil Liberties Union complaint details alleged violations against 15 U.S. citizens. It is the latest in a series of complaints about the checkpoints, where drivers passing through are ostensibly stopped and asked if they are U.S. citizens.

A group of Arivaca residents recently presented a petition to the Border Patrol’s Tucson Sector chief, Manuel Padilla Jr., asking him to remove one of the three checkpoints that surround the town.

That petition said the checkpoints deter tourism and hurt local businesses. It also charged that “people of color experience greater scrutiny and longer detentions at the checkpoints.”

“We get calls from the Arivaca area, from the Santa Cruz area, from South Tucson, almost all of them from American citizens who’ve been stopped and they want to make a complaint,” he said.

But Grijalava said that even with his office advocating for these citizens, the Department of Homeland Security rarely responds.

“Four or five months later, we’re getting calls from these people saying, ‘I haven’t received anything,’ ” he said.

Similar checkpoints exist in many border states, north and south. Last year, when Sen. Patrick Leahy, D-Vt., asked by what authority a Border Patrol agent at a checkpoint in upstate New York was detaining him, he said the agent pointed to his gun and said, “that’s all the authority I need,” news reports say.

Neither CBP nor the DHS have released any information in recent years about the total number of checkpoints. The most recent count obtained by The Arizona Republic, for fiscal 2008, showed a total of 128 checkpoints.

Customs and Border Protection officials released a statement Wednesday saying, “CBP does not tolerate racial profiling or agent misconduct and appropriately investigates allegations of wrongdoing.” The statement called the checkpoints a critical tool for denying travel routes from the border to smugglers. The statement did not address the allegations that agents use immigration checks as a pretext to fish for other wrongdoing.

Most of the 15 people included in the ACLU complaint said they were never asked about their citizenship. Others say they were racially profiled, or searched improperly.

Julia Turner, 20, said that for the past year, she was routinely pulled over for secondary inspection at a checkpoint on Arizona 80 between Tombstone and her workplace in Sierra Vista. On one occasion, when she tried to phone her father, a retired sheriff’s deputy, she said the Border Patrol agent tried to snatch the phone out of her hand.

“I’m Hispanic, but I’m adopted and my parents are Caucasian,” Turner told The Republic. “When they drive my car, they always get waved through. When I drive, they ask to search my trunk. They never find anything, but it’s anywhere from 5 to 45 minutes. It’s racial profiling.”

Chad Ivey, 41, a San Diego resident and Marine veteran who works in information technology, was riding with a friend, Don Tran, the day after Thanksgiving on their way to Phoenix when an agent sent them to secondary inspection at a Border Patrol checkpoint near the California-Arizona state line, on Interstate 8.

“We asserted our right to decline a search of our property, and that didn’t go well with the agents,” he said. “We had nothing to hide, but we didn’t consent to a search.”

Ivey said the agents said their dog had “alerted” to their car, though he said the dog had reacted to a purse in the open trunk of a car parked next to theirs. The agents detained the men in steel cells inside a trailer for 45 minutes, searching the car without their consent, Ivey said, before they were released.

In a 1976 ruling, the U.S. Supreme Court ruled that immigration checkpoints were permissible if the stops were brief, involved “a limited enquiry into residence status,” and a visual inspection of the exterior of the vehicle.

“But that’s not what’s happening here,” said ACLU attorney James Duff Lyall in Tucson. He said the cases provide strong indications that the Border Patrol is using the checkpoints for general crime control, “which the courts have said is not acceptable for a checkpoint.”

“The same thing is happening over and over again to many border residents,” Lyall said. “They’re going on fishing expeditions where there’s no reasonable suspicion.”

He cited the example of three women, between the ages of 59 and 69, who volunteer with the Samaritans of Green Valley, a group that offers aid to migrants found in the desert suffering from heat, dehydration and injuries. They were stopped at the Arivaca Road checkpoint on Dec. 18 by an agent who said their backpacks made them suspicious. The women were detained for half an hour, until a dog arrived, and then were allowed to go. They said they were never asked about their citizenship.

The ACLU’s complaint asks the DHS to investigate the incidents it details, to review checkpoint policies and practices to make sure agents aren’t conducting improper searches, racially profiling, or engaging in other violations of civil rights, and to release to the public results of any investigations into unlawful conduct by agents.

But Lyall said Homeland Security has yet to respond meaningfully to complaints filed by the civil-rights group last October on behalf of Arizona residents stopped by “roving” Border Patrol agents, or to an April 2012 complaint relating to 11 people who said they’d been abused at border crossings.

“The lack of response to widespread civil-rights allegations by the largest federal law-enforcement agency in the country is symptomatic of larger problems and failures of oversight at Homeland Security, and it needs to be addressed by leadership at DHS and CBP, but also by Congress,” Lyall said.

Editor’s note: This story was previously published on The Arizona Republic.