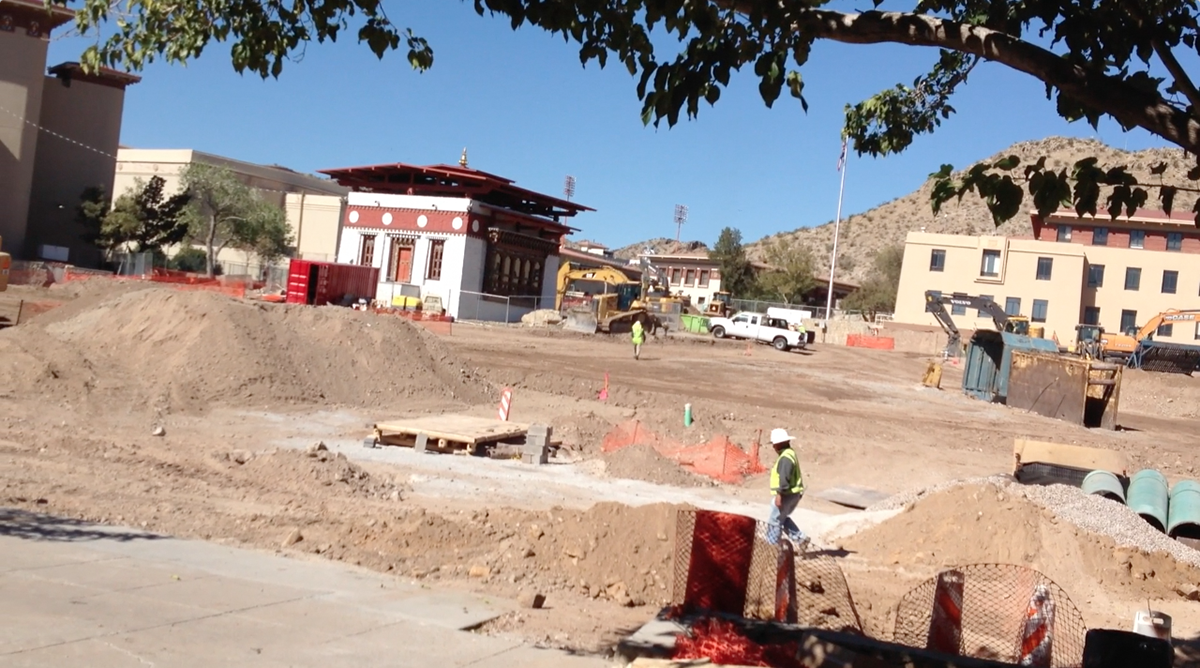 Centennial Plaza will be located in the middle of UTEP campus and includes a Lhakhang, a gift from the Kingdom of Bhutan. (Nora Rausch/Borderzine.com)

EL PASO – The University of Texas at El Paso begins its centennial celebrations at the start of 2014 and students are excited about the changes the centennial is bringing to campus. Centennial Plaza will be located in the middle of UTEP campus and includes a Lhakhang, a gift from the Kingdom of Bhutan. (Nora Rausch/Borderzine.com)

The Centennial Plaza is designed to be an open area in the middle of campus, where Memorial Triangle previously was. University Avenue will be permanently closed through campus as part of the plans to make UTEP more pedestrian friendly for its 23,000 students.

In addition to the plaza where students will be able to stroll, socialize and relax, under the shade of native mesquite trees, Centennial Plaza also includes a hand-carved and hand-painted Lhakhang, a gift from the Kingdom of Bhutan to the people of the United States. The anticipated completion of construction is late summer to early fall of 2014, in time to host the western debut of Opera Bhutan. University Avenue will be permanently closed through campus. (Nora Rausch/Borderzine.com)

The majority of construction is due to be completed by the fall of 2014, by the 100th anniversary of the founding of UTEP, on September 23rd. While celebrations for the centennial will happen throughout 2014, the fall of 2014 is when UTEP will unveil the Centennial Plaza, enjoy Minerpalooza and homecoming week, as well as other special ceremonies and festivities.