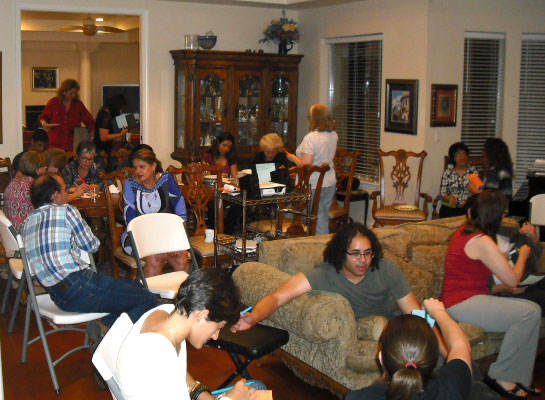 EL PASO — On a warm Saturday night in September a merger of education and religion was taking place at the home of Cyrous and Ruhi Heydarian in the affluent Diamond Point Circle neighborhood of west El Paso.

A group of about 30 men and women of all ages, some Hispanic, some Iranian others anglo, gathered in their living room for a “devotional” of the local Bahá’í Faith Community. The multicultural, multiethnic group of devotees was discussing Chicana feminism, a topic led by one of their three college age daughters, Nazanin.

The local Bahá’í Faith community consists of people of various backgrounds, and despite their limited numbers a massive amount of positive energy circulates amongst them. They began with a PowerPoint discussion about that night’s subject, Chicana feminism, the group listening so intently that one could hear the crickets singing in the night outside. Then as soon as Nazanin finished they talked about the subject, allowing anyone who desired to comment to speak up.

Nazanin said she liked the ideal of unity within her faith. “One thing I really like is the emphasis of appreciation of diversity.” She said she feels more comfortable exploring her life and the world around her in the context provided by the Bahá’í Faith.

The Bahá’í Faith began 150 years ago and has more than 5 million followers today. The Bahá’í Faith is the most recent in the line of the monotheistic Abrahamic religions, and is, by far, one of the most varied and tolerant, according to Dr. Susan Cangurel, a professor of religious studies at the University of Texas at El Paso. The Bahá’í faith unifies the commonalities among Abrahamic religions such as Judaism, Islam and Christianity instead focusing on the differences, along with those of the Dharmic Religions and Zoroastrianism paths. Fifteen principles of peace in the Bahá’í faith encourage an egalitarian society based on unity and respect.

This religious system was created by a man named Bahá’u’lláh, who originally was a follower of the Báb, the creator of a precursor religion known as Bábism. The religion itself is guided by the Kitáb-i-Aqdas, the central book of the faith. It contains the laws, history, and prophecies of this egalitarian group.

With little cakes and tea in the kitchen the event looked more like a casual party than a religious practice. The group originally worshiped in a community center on the northeast side of town but sold it to another religious denomination that was in need of a place to worship.

One of the Heydarian sisters, Mona, who is studying biology at UTEP, said she declared herself a Bahá’í because it is a faith where “science and religion” agree. “That’s a big thing that shapes my life as a Bahá’í, and it’s cool to see how they do align. And if we are told if they do not agree we need to look at what we have done to not make them agree.”

Afterwards, they engaged in an art activity called mirroring in which they drew with pens and markers on paper what they believe they represent as individuals in society and life.  The prior silence was obliterated by boisterous conversations as they engaged in the activity. When they finished their projects they all quieted down and with some encouragement from the Heydarian daughters, they again had an open discussion about the project and its results. Asked about her faith, Carmel Heydarian, an energetic computer science major, replied:  “Your actions should be aligned with your deeds and your words.”

Heydarian believes that in modern society people are constantly bombarded by negative messages and it’s good that, “you pick something you believe and live by that.”

After the discussion about the project was finished the familiar sound of socializing began, shifting the mood of the event to a social gathering. Friends and families having a good time, enjoying the company of the others and discussing the night’s events, life, and others issues well into the late hours of the night.

Carmel, Mona, and Nazanin, the Heydarian Sisters, are three of the youngest members of the  Bahá’í Faith community in El Paso. These spectacular young women are all majors in the different fields of computer science, biology, and psychology at UTEP. A major aspect of the Bahá’í Faith is ensuring that the women in families are well educated.

For further information about the Bahá’í Faith contact Dr. Susan Cangurel at epbahaiassembly@gmail.com or browse the website at www.elpasobahais.org.