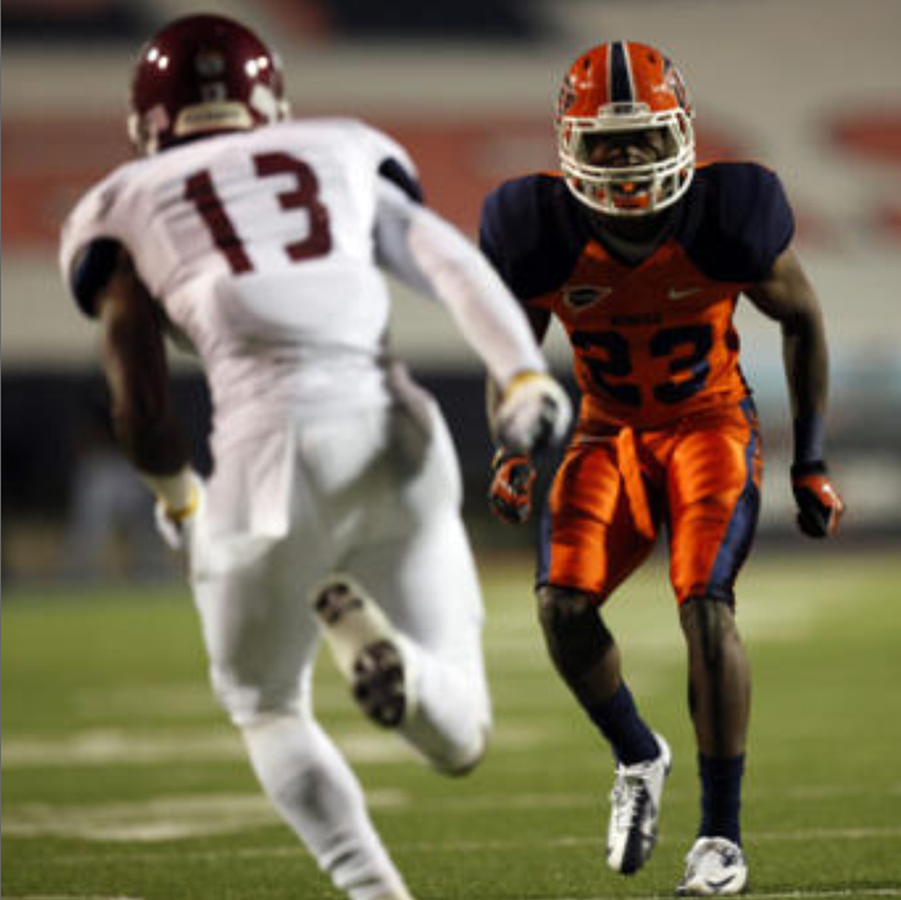 EL PASO – At 5 feet 11 inches tall and weighing in at 125 pounds the main obstacle to fulfilling my dream of playing football was my own fear that I was just too small, but with the encouragement from family and coaches I focused on technical skills and I made varsity in my senior year in high school. Born in the small town of Lufkin, TX as a young boy one of three kids, I dreamed of playing football as every other child did and I started early. My mom who worked in a hospital and my father, who works as a truck driver, gave me the opportunity to play football at the age of 7.

Not knowing what to expect come from this sport. I was pretty excited to go up against kids who had been in this game far longer than I had. You had your variety of big, tall, fast and smart players.

After playing this new game for the first time in the 5th grade I began to seek it passionately to turn what seemed to be a kid’s dream into a reality. The real task began in middle school among a group of players that brought a level of talent, which was intimidating.

The game became more structured than before. It wasn’t about just letting kids have fun, but more focused on structure and strategy. Being challenged because of my small size limited me from the potential that my coaches could have seen.

The adversity began to set in even more once I reached high school. It started to become very clear to me that I wanted to play colligate football on a higher level. At 5’ ft. tall 125 pounds I was really challenged by the talent that I knew I had. Playing the cornerback position I had to become physically stronger, faster and mentally smart to compete with the guys around me.

As I waited for my opportunity to play on the varsity level, I continued to face difficult times on the sophomore team in the tenth grade. When my junior year approached I was selected to play on the Varsity team. At 5’7” and 135 pounds I was still undersized.

The journey to get to the colligate level started out well, but as the season went on my playing time was reduced. I continually sat on the bench for a large amount of time each and every game and I was demoted to the junior varsity team during my junior year.

This really put a dent in my confidence as a football player, but it was a hidden benefit because I had the opportunity to go from not playing to playing all games. Once my senior year approached I was now an official starter on varsity and I saw my goal right before me.

I could see those schools coming for me in the blink of an eye, knowing that the opportunity to play at the next level was near. My senior season took a turn for the better but when it ended I was not offered a scholarship, so I had to walk on to a division one school for this blurred dream of mine to become clearer.

The first school I attended was Texas Southern University, which did not grant me the opportunity to play so I transferred to the University of Texas at El Paso with an opportunity to walk on and earn a scholarship.

But the obstacles never seemed to cease. With not having the given opportunity or with the transfer I had to sit out a season, which by college rules is understandable but not only that I had to make up all the credit hours that did not transfer over, which then took me on a three-year journey of classroom work.

Being ineligible made things difficult to achieve the chance to play at this level, which I had wanted all my life. But once I finally got the opportunity to play, it made everything well worth the trouble and heartache.

At 23 years of age, reflecting back upon this long journey, which brings me here now, I’m thankful for what I’ve achieved. I thank God for allowing me to withstand the hard times and I am thankful to the people who helped me on this journey.