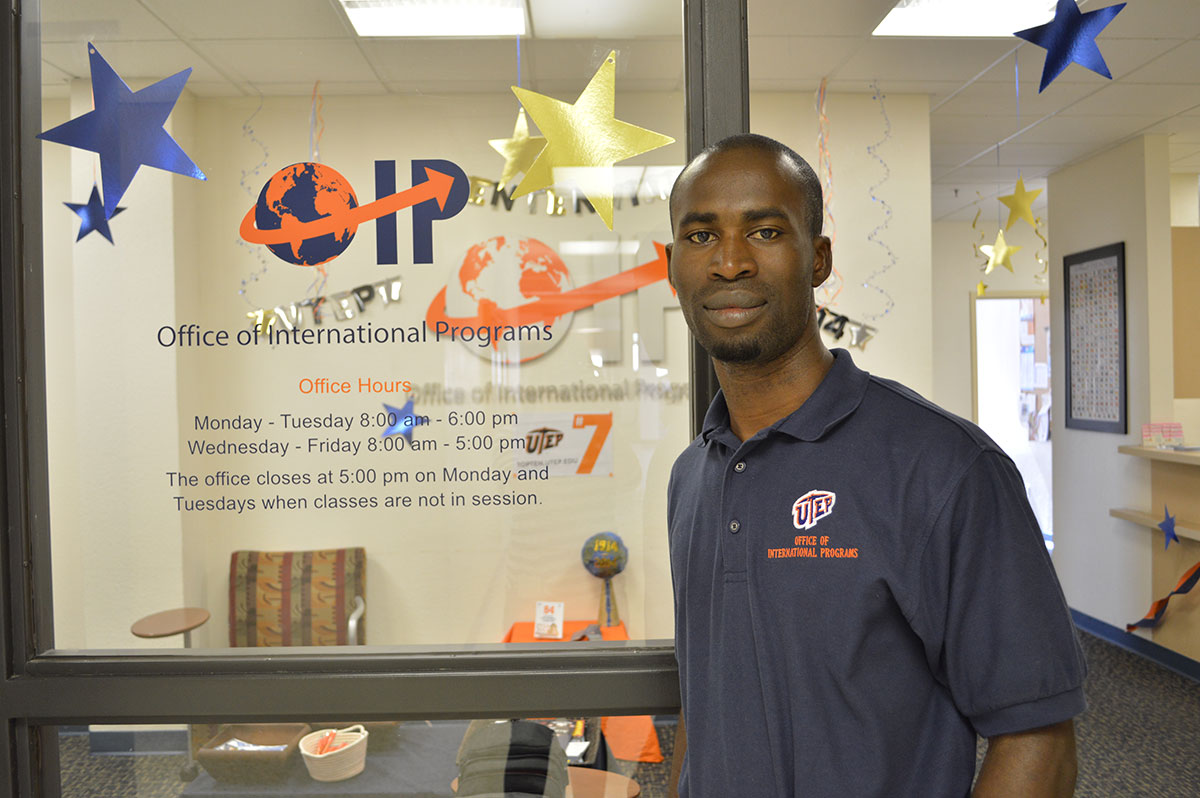 Ebenezer Anom is one of about just one hundred students from Africa at UTEP. (Vianey Alderete/Borderzine.com) Ebenezer Anom is one of about just one hundred students from Africa at UTEP. (Vianey Alderete/Borderzine.com)

EL PASO – Ebenezer Anom’s passion for nursing developed when he was a child in Ghana from a visit to a hospital where he was impressed by the activity of the nurses. Despite his parents’ disapproval because nursing is seen as woman’s work in his native country, he is now finalizing his senior year in pre-nursing at the University of Texas at El Paso.

He came to UTEP after acquiring a bachelor’s degree in computer science and communication at the University of Duisburg, in Germany. “After my first degree I worked for about three years and then I realized my passion in nursing was stolen from me. So this was the point where I asked myself if I wanted to continue what I was doing or go into what I am passionate about,” said Anom.

Anon’s motivation to pursue nursing comes from his wife and his two small children, waiting for him back home in Ghana. At the same time, he says he constantly feels the pressure of balancing his academic responsibilities, paying for tuition and his living expenses here and also sending a little money back home to his family. He currently lives with a brother, who serves in the U.S. Army. “When international students come to me with a financial crisis I don’t have a lot of options,” said Kristin Oberheide, director of International Programs at UTEP.

According to Oberheide, the first problem for any international student is filling out the I-20 form. After being accepted in the university of their choice, international students must confirm their financial resources with their I-20 certificate of Eligibility for Nonimmigrant Student Status. Reem Issa, a Palestinian refugee to Syria who emigrated from the United Arab Emirates. (Vianey Alderete/Borderzine.com)

As a federal guideline, the I-20 form estimates the minimum cost of tuition, books, insurance, fees, and living expenses for individual universities during a 12-month period. This money must be presented as a fund, which could be retrieved at any time.

“This is a big hurtle. Here at UTEP we have a relatively low cost of living of about $33,000 per year per person. This is a crazy amount of money you have to show,” said Oberheide.

“We have our own way that we need help economically; it could be small grants or scholarships. We are not begging… we also want people that live in El Paso to think about us,” said Anom.

If the student manages to fill out their I-20 form, their student visa is not yet guaranteed.

The decision of whether or not they receive a visa rests heavily with the U.S. consular officer in their home country who conducts the visa interview.

“I might be a bit fortunate, but most of my friends who are also equally qualified and have admissions to schools don’t make it to the schools, because when they went to the embassy or consulate they are denied their visa,” said Anom.

Some students, according to Oberheide, do not follow the international student process correctly and enroll at the university without a student visa.

“When I was going for my visa [interview] there was a lot of panic. It doesn’t matter that I have all my paper work. It goes down to those two or three minutes with the interviewer at the consulate,” said Abiodun Ambali, a nursing major from Nigeria.

Ambali said the interview consists of questions about why a student wants to study in the U.S. and about their future plans.

“Sometimes if you answer these questions too perfectly, or you are scared, you don’t get the visa,” said Ambali. Presenting too much evidence or paperwork at the consulate interview can also result in not obtaining a visa. Ambali she did a lot of prior research by interviewing friends and family who had already secured student visas.

Individual factors may have an impact on the consular officer’s decision.

UTEP student Reem Issa, a Palestinian refugee to Syria who emigrated from the United Arab Emirates was only granted a student visa for three months.

Her current situation is legal in the U.S., but when her I-20 is expires in five years she must travel back to United Arab Emirates and renew her visa and I-20.

“I don’t want to go back because it’s so risky to not get a visa again. Also if I leave for more than six months they take away my (U.S.) residency,” said Issa, who studies pre-engineering.

During her consulate interview, Issa says, “the interviewer was so kind to me because he saw I was scared. I was 18, and I wanted to go to school. He even told me I have to go visit Disneyland,” said Issa.

To comply with the rules of the U.S. Immigration and Customs Enforcement, the UTEP Office for International Programs reports the international students’ status through the use of Student and Exchange Visitor Information System (SEVIS), which tracks and monitors the school’s exchange visitor program. International students must have proof they are taking classes, keep their forms up to date and applications active, and even report their working status.

With about 500 Mexican national commuter students attending UTEP, the crossing of the international bridge has come to define the region’s culture. “When you are commuter student you start to recognize people who commutes with you, so you create a community among those who cross and those who sell stuff at the bridge,” said UTEP graphic design and advertisement student, Alejandra Urquide.

Urquide is able to afford her tuition with her own money and says this has not been an issue to her, but commuting on a daily basis became the biggest issue for her.

“Crossing requires a lot of commitment. It requires waking up four hours earlier and spent a long time at the bridge. During the summer it is hot as hell and on winter is super cold. It limits your activities, you can’t go home or back to Mexico because it requires a lot of effort to cross and you change your regular patterns of behavior and activities,” said Urquide.

Even though Urquide describes the culture clash she faced at UTEP primarily on the way classes were taught, language was not a major issue for her. Eighty percent of El Paso’s population is considered Hispanic or Latino, and 72 percent speak other languages than English at home. For international students, the prevalence of Spanish speakers in El Paso has a major culture impact on them.

“People speak to me in Spanish all the time; everybody speaks Spanish here and I have to say I don’t speak Spanish. I need to learn Spanish if I plan on staying here,” said Issa.