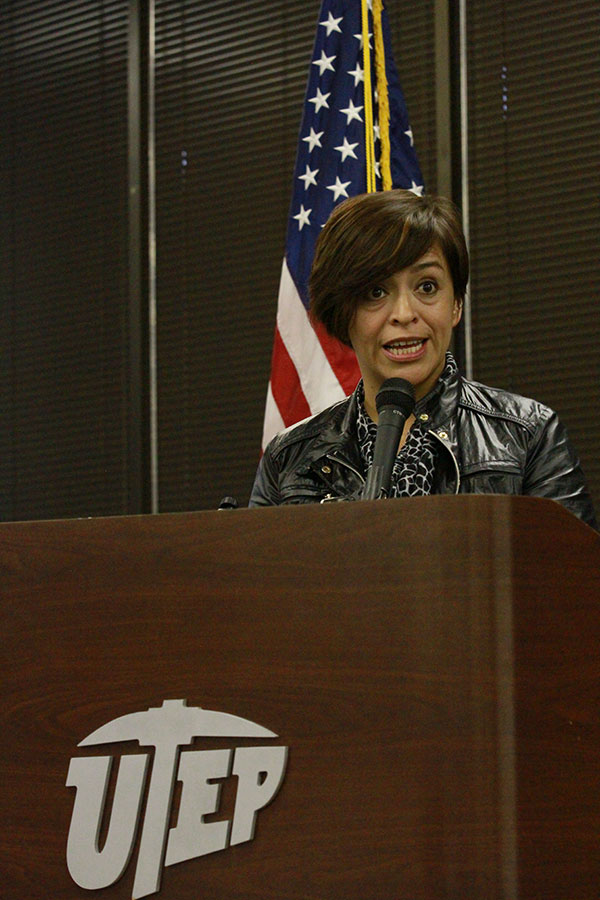 Mexican journalist Anabel Hernandez said that 'corruption' was the one single word that describes what is happening in Mexico. (Luis Hernández/Borderzine.com) Mexican journalist Anabel Hernandez said that 'corruption' was the one single word that describes what is happening in Mexico. (Luis Hernández/Borderzine.com)

EL PASO – Five unique and experienced voices were heard at the University of Texas at El Paso this week discussing the seemingly eternal drug war and the government policies that fuel it that has plagued the U.S.-Mexico border region in recent years.

The event, called  “Drug Policy on the Border and Beyond: Dangers Facing Journalists, Obstacles Facing Policy Makers” organized by Kennis, added to the growing discussion by policy makers, law enforcement, public officials and journalists on how to end the war that has claimed thousands of lives in Mexico and led to increased anti-drug enforcement along the U.S. side of the border.

Hernandez, an investigative journalist in Mexico who has done some of the best coverage of the drug war and published a book, Narcoland: The Mexican Drug Lords and their Godfathers, in English and Spanish, drew upon her extensive research to discuss the strong connections between the drug cartels and the Mexican government. She also spoke of the importance of the drug economy to the people of Mexico.

“If I can describe in one single word what is happening in Mexico, it is corruption,” she said. She added that the Mexican and U.S. governments are at fault in allowing the spread of international criminal cartels and must change their policies and activities if the situation is going to be rectified. Campbell, a professor of sociology and anthropology at UTEP and author of the 2009 book Drug War Zone, suggested a bi-national effort, saying that legal policies are the main source of harm in this ideological war.

“We need to pull together and form a united international movement of Americans and Mexicans to work together to end the drug war, because I think that is the source of the problems,” he said. “The reason this has to be a bi-national effort is because the drug traffickers are transnational and war on drugs policies are international.” He added that attempts by governments to criminalize drugs only serve to benefit those who would deal in contraband.

Gonzalez, a former DEA agent and executive director of the Texas Narcotics Officers Association, began his presentation by quoting the Tim Burton “Jokers” famous line, “have you ever danced with the devil in the pale moonlight” to describe his experience in the DEA fighting drug trafficking organizations. He spoke about the death and torture of DEA Agent Enrique Camarena in 1985 in Mexico and described the brutal efficiency of the cartels and their general lack of respect for human life.

Kennis, a professor of communication at UTEP, has done journalistic and academic coverage of the drug war. Instead of speaking solely about national drug policy he discussed the actual impact of the drug war, detailing the complex relationship between the Sinaloa Cartel and the United States government. He began by discussing the trail of Vicente Zambada Niebla, son of a Sinaloa cartel kingpin, and the bizarre circumstances that surrounded his arrest in Mexico City in 2009 and trial for smuggling cocaine and heroin to Chicago.

He then showed the links between the Sinaloa Cartel and the U.S. government’s Alcohol, Tobacco and Firearms (ATF) agency’s “Fast and Furious” program in which the agency smuggled guns into Mexico to capture criminals, but lost track of many of them.

O’Rouke said he has spoken publicly in favor of the decriminalization of marijuana citing the increased level of violence in Ciudad Juarez as the reason why he took that particular stance. He brought with him his first-hand political experience as a city councilman here at the front of the drug war.

“The sooner we get to the logical conclusion of this debate and this policy shift and change across the country the better for everyone,” he said, for the sake of  “those kids in jail right now throughout the United States, for all those kids in middle school in El Paso, Texas who are being sold dope because there is no protection in an absolutely free black market, for all those young people who are literally willing to kill or be killed in Ciudad Juarez and other parts of Mexico to get that drug here to the United States.”

Some 140 spectators attended the discussion that was held at the Tomas Rivera Center on the UTEP campus. Hernandez, who writes for the Mexico City daily Reforma newspaper and whose father was kidnaped and murdered in Mexico several years ago, also spoke to several journalism classes.