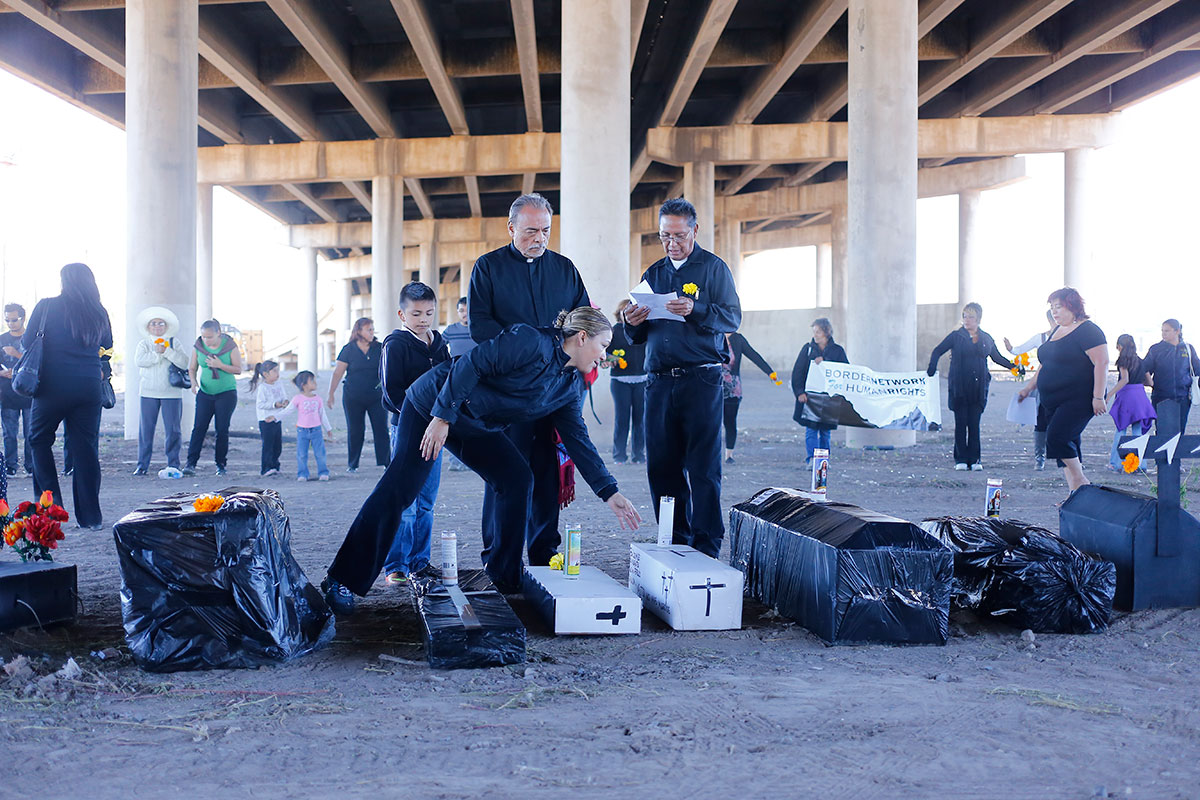 EL PASO – The Border Network for Human Rights held its eighth annual Day of the Dead Procession along the Cesar E. Chavez border highway on Nov. 1 to remember those who have perished while trying to enter the United States and show their support for comprehensive Immigration Reform.

“As the Day of the Dead looms, we take this day to remember the immigrants who unfortunately lost their lives while crossing the border,” said BNHR director Fernando Garcia. “We should never forget them; we will be here honoring them every year because if we forget about them their deaths will be in vain and more people will lose their life.” Beatriz Salazar lits a candle before the prayer commemorating the immigrants who died crossing the border. (Edwin Delgado/Borderzine.com)

The non-profit BNHR, along with nearly 150 El Pasoans of all ages, marched from Bowie High School through Central El Paso and along the border highway that separates El Paso from Ciudad Juarez. Participants carried coffins made out of cardboard, religious crosses, lit candles and banners to express their support for immigration reform. Although the U.S. Senate passed a comprehensive immigration reform bill that grants a path to citizenship to undocumented residents last summer, the bill is currently stalled in the House of Representatives and unlikely to be discussed this year.

“Every year around 500 people die trying to cross the border because of the broken immigration system that we have in this country,” said Gabriela Castañeda, member of BNHR. “We are here in our eighth year to demand Congress to take action… to end with all of this suffering.”

The BNHR organization was founded in 1998 and began with this annual procession in 2006.

The event takes place every first day of November, “Día de los Muertos,” to commemorate border crossers who lost their lives in previous years and also to put pressure on the government and respective authorities to take action.

Father Arturo Bañuelas of the St. Pius X Church said: “It’s a disgrace and an injustice that a person dies in the desert when they come with the sole intention of feeding their families.”

The protesters walked along Delta Road for about a mile.

Activist Irma Cruz said that when the public discusses immigration reform the issue of security for the border usually comes up, although the number of people crossing illegally and being detained has declined over the past few years.

“It’s a shame that the government is spending a lot of money in having more equipment and border patrol agents instead of using the money to facilitate entry to the country,” she said.

Cruz said it’s necessary to create a commission that makes sure that immigrants are treated in a humane manner rather than increasing security at the border. Juan Ortiz carries a casket as part of a group of about a hundred and fifty persons who participated in the procession for the Day of the Dead. (Edwin Delgado/Borderzine.com)

As the participants arrived at their destination at the corner of Delta and Cypress underneath the border highway bridge, protesters lined up the cardboard coffins on the ground and formed a circle while BNHR officials talked about the purpose and objective of their march, while two U.S. Border Patrol vehicles drove around the area.

“We need to give a voice to those who perished and we need to strengthen that voice to fortify our effort to change those unfair laws that have cost so many lives,” Bañuelas said.

After commemorating the dead with a prayer led by Bañuelas, the crowd moved on to the border fence to view the crosses that were put up with the names of men and women that have lost their lives while attempting to cross the border. The journey concluded with participants looking at gruesome pictures of the remains of several victims found along various parts of the Southwest border.

“Here at the border fence we have put more that 300 crosses in memory of those who died and have been found in remote locations,” Garcia said as he invited people to look at the rows of 18-inch white crosses and, a little further along the fence, three to four foot enlarged pictures of corpses. “We have to realize how terrible this human crisis is,” Garcia added. “It’s a human rights crisis which have been caused by the U.S. government.”

Garcia also said the protest is important make sure the immigrant deaths do not go unnoticed by government authorities.

At the conclusion of the march, most of the participants met one last time under the border highway and shared pan de muerto, sweet bread, and stories of people they know who couldn’t finish the journey. They also began to plan for next year’s march to continue pushing for a solution.

“We invite people to join events like this because we will keep on having them because immigration reform is a national debate,” Garcia said. “If people don’t come out and support (the reform) it may not happen or will be a poor reform with no legalization and no path to citizenship. It’s crucial that people get in touch with us and take action…”

Msgr. Arturo Bañuelas marches along the border highway as part of the procession for the Day of the Dead organized by the Border Network for Human Rights. (Edwin Delgado/Borderzine.com)

Juan Ortiz carries a casket as part of a group of about a hundred and fifty persons who participated in the procession for the Day of the Dead. (Edwin Delgado/Borderzine.com)

Beatriz Salazar lits a candle before the prayer commemorating the immigrants who died crossing the border. (Edwin Delgado/Borderzine.com)