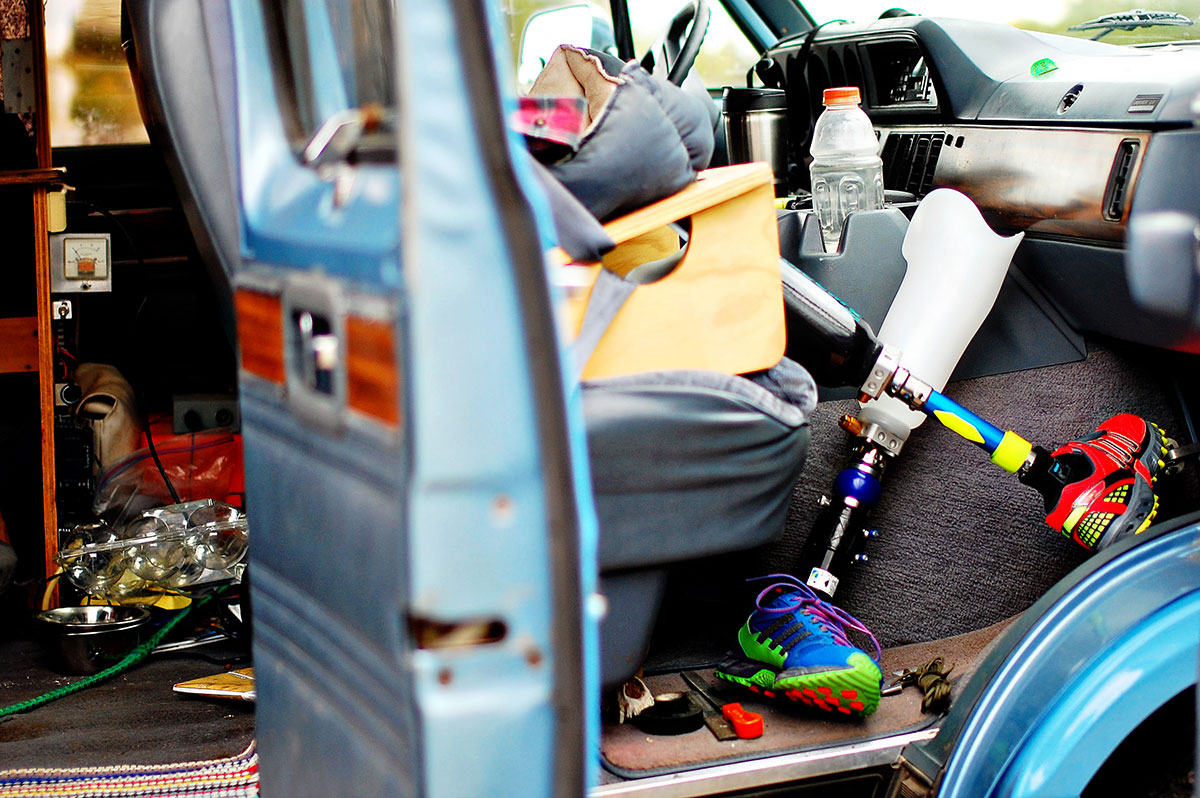 Joe rides a 1990 blue Dodge van and he stops every five miles or so to make sure the cyclists have enough water, food and medical supplies. (Jacqueline Armendariz Reynolds/Borderzine.com)

We’re all feeling pretty stressed today. Carlos’ prosthetics have been rubbing against his skin causing painful contact burns. The press were calling non-stop, and our Internet access is spotty at best. The response to this story has been surreal, incredible, especially considering the size of our team. In total we are seven people and a dog.

Carlos, Bennett, Fernando and Victor are the cyclists and over the past couple of days they have become inseparable. It is the type of simple, no-strings attached friendship that often forms in childhood, but is rarely seen amongst adults. Bennett jokingly calls it, “a bi-lingual bromance,” and seeing them all sharing one tent confirms it.

Driving ahead of them in a 1990 blue Dodge van is Joe, Bennett’s father-in-law. He stops every five miles or so to make sure they have enough water, food and medical supplies. Joe is a retired scientist from the Bay area, a tall, lanky man with a long, grey beard whose side-kick is a small white Chihuahua rescued from the mean streets of Los Angeles.

Charlie is a sweet little dog, but we get the feeling that he thinks we are crazy. Finally, there is Jacqueline and myself. Jacqueline is our tech person and responsible for all of the beautiful photos you see on social media. Then there is me, I write this and organize events along the way. We are on the advanced team and arrive before the rest of the group to make sure everything runs smoothly. When we got to El Cosmico the temperature had dropped considerably. The staff had graciously waved our camping fee and Liz Lambert, the owner and a famous Texas hotelier agreed to promote us on social media.

We immediately set up shop in their lobby. The press was calling, but the riders were behind schedule due to Carlos’ leg problems and a headwind making pedaling even more difficult. By the time they reached us it had started to rain and three reporters had arrived. They were happy with us to interview until Carlos arrived flashing his million-kilowatt smile, though today it looked a little strained.

After the interview the groups settled in and cleaned up. We were hungry so we piled into Joe’s van and headed to one of the few places still open at that hour, Jett’s.

It was fancier than we had anticipated, but the smells emanating from the kitchen compelled us to stay and we figured we had earned it. It didn’t take long for us to catch the attention of the couple sitting next to us.

After chatting we learned that they had lived on the border of Matamoros and were not strangers to the realities of the violence on the border. The woman began to cry and before they left they raised their glasses to us and wished us well. A few minutes later the manager approached our table and informed us that they had paid for our meal. After where we have been, acts of human kindness are sometimes hard to believe. Carlos nearly cried.

We went back to the campground with filled hearts and bellies. The cyclists all got into one tent, the night had turned frigid and they relied on each other’s body heat to keep them warm. Joe and Charlie snuggled in their van as usual, and we shivered in our tent despite extra sheets and blankets. The next morning we would rest. Frozen fingers and toes and the prospect of hot coffee get us out of our tents early even though most of the crew has nowhere to be. Carlos and I get showered and ready and barely have time to eat Joe’s delicious egg scramble just in time for an interview with Marfa Public Radio.

It is an intense 40-minute recorded interview that is made more complicated by my attempt to simultaneously interpret and be interviewed. When it is over Carlos and I look over at one another and laugh nervously, but everyone is so kind and assures us it was great.

We happily return to El Cosmico just in time to meet Carlos Spector, immigration attorney and founder of Mexicanos en Exilio. He comes bringing extra blankets and tools to fix Carlos’ legs, “For the robot man,” he says jovially. We laugh and Carlos immediately gets to work, carefully following the directions Eddy, his prosthesis expert gave him.

The group separates. The cyclists, minus Carlos bike around town and the rest of us head towards NPR for more interviews and the free lunch that Food Shark has donated to us.

We approach just as a flash mob of school children dressed as zombies begin to dance to Michael Jackson’s thriller. Carlos laughs and says, “it’s like being in a movie”, and for some reason that is still not clear to me I am overwhelmed by emotion and want to cry.

The kids do a great job and we settle in for a delicious plate of pulled pork and beans. Marfa is a small town and we see nearly everyone we have met there, it is nice to not feel like a stranger in the new place and we chat until the crowd thins out. El Cosmico is hosting a Halloween party so we make arrangements to meet up later.

We drop Carlos off back at the campground so he can finish working on his legs and wander around town for a while. A local talks about how Marfa has changed and invites us to talk to her retired father who knows the town history, but in between press calls and emails there isn’t much time for small town hospitality.

The day had been sunny and crisp, but as night falls it becomes necessary to put on a coat. El Cosmico fills up with children dressed up as witches and super heroes who come to trick or treat and the cyclists head into town try and throw together a Halloween costume.

Victor is the only successful one, returning from the Dollar General with a fake knife and box of cereal, “I’m a cereal killer,” he beams. The party for the adults gets started and Carlos is all smiles, posing for pictures and enjoying the spectacle that is Halloween in the United States.

The sky having cleared from the night before is full of stars and clean dry air fills our lungs. Unfortunately, we have to get an early start the next day so we get into our tents when the party begins to really get started.

The tech crew prays for better Internet access and are grateful for the extra pillows and blankets. In the morning, we will be joined by Fox News Mundo and several other cyclists who will join us until we reach Alpine so it is important to try and get sleep in spite of the music and noise that fill the usually quiet town.